​Penguins GM Ron Hextall talks about his club’s offseason and their plans for the upcoming season, plus the latest on Jason Demers, Bo Byram, Ryan Donato and more in today’s NHL morning coffee headlines.

POST-GAZETTE.COM: In an interview with Mike DeFabo, Pittsburgh Penguins general manager Ron Hextall said “there wasn’t a feeling around here” that big changes were needed during this offseason. “I think the part you can’t lose sight of is we did win the division last year,” he said. 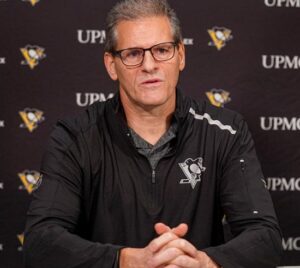 Hextall doubts team captain Sidney Crosby will be sidelined long-term by his recent wrist surgery. However, he conceded Evgeni Malkin (knee surgery) could start the season on long-term injury reserve. Hextall also said the departures of Jared McCann and Brandon Tanev were cost-cutting measures to remain under the salary cap. He also

Turning to the UFA status of Malkin, Kris Letang and Bryan Rust, Hextall remains hopeful of reaching an agreement with the trio that’s fair for both sides. He’s also looking for better performances from defenseman Marcus Pettersson and John Marino and winger Jason Zucker.

SPECTOR’S NOTE: The Penguins failed to advance past the first round in two of the last three postseasons and didn’t get past the qualifying round during last year’s expanded playoff format. Questionable goaltending and an aging roster core were contributing factors behind those playoff disappointments.

Hextall’s limited cap space prevented him from making any significant additions to his roster this summer. The outcome of this season could determine if Malkin, Letang and Rust still fit into the Penguins’ long-term plans.

PHNX: Craig Morgan reports former Arizona Coyotes defenseman Jason Demers is still waiting to find an NHL team to play with. “There’s hard days and there’s good days,” he said. “You’ve just got to focus on keeping yourself ready and making sure you don’t look too far ahead or you can make yourself go crazy, sitting in the house.” The 33-year-old Demers is training in Arizona.

COLORADO HOCKEY NOW: Avalanche defenseman Bo Byram is hoping for a healthier season after being limited to just 19 games in 2020-21 by concussion symptoms and testing positive for COVID-19.

EDMONTON JOURNAL: Oilers prospect Dylan Holloway might not be on the ice for the club’s rookie training camp. He underwent offseason surgery to repair a broken thumb suffered last season playing for the University of Wisconsin but it may not be fully healed.

← Sunday NHL Rumor Roundup - September 12, 2021 NHL Rumor Mill - September 13, 2021 →
We use cookies on our website to give you the most relevant experience by remembering your preferences and repeat visits. By clicking “Accept”, you consent to the use of ALL the cookies.
Do not sell my personal information.
Cookie SettingsAccept
Manage consent