NBC SPORTS CHICAGO: Jonathan Toews looked like his old self in his first NHL game since being sidelined with chronic immune response syndrome 407 days ago. Despite a 4-3 preseason shootout loss to the Detroit Red Wings, the Blackhawks captain logged 22:48 of ice time, collected an assist, three shots on goal, two takeaways and won 15 of 21 faceoffs. 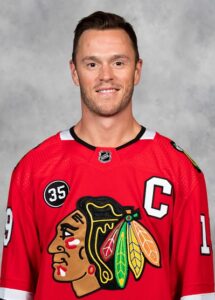 SPECTOR’S NOTE: A promising start for Toews. The Blackhawks need their captain healthy if they hope to contend for a playoff spot this season.

CALGARY SUN: Former Flames captain Mark Giordano returned to Calgary for his first game since being selected by the Seattle Kraken in July’s expansion draft. He received a warm welcome from Flames fans, scoring a goal in a 4-3 preseason shootout win by the Kraken.

THE SCORE: Toronto Maple Leafs goaltender Jack Campbell believes there can be no excuses for the club this season. He and his teammates intend to use last spring’s disappointing postseason as motivation to win in the 2022 playoffs.

SPECTOR’S NOTE: The Leafs will face tremendous pressure this season following three straight first-round playoff exits.. Their last Stanley Cup title was in 1967 and they haven’t won a postseason series since 2004. Some teams can use previous playoff disappointment to grow and change into a championship team. Whether the Leafs can channel that this season remains to be seen.

SPECTOR’S NOTE: It’s still very early in preseason play and Eklund hasn’t yet tasted regular-season NHL action. Nevertheless, the 18-year-old winger could have an opportunity to at least start the season with the Sharks.

TSN: Montreal Canadiens owner Geoff Molson reportedly offered a contract extension to general manager Marc Bergevin in July, but they haven’t reached an agreement yet. Both sides continue to talk.

SPECTOR’S NOTE: TSN’s Pierre LeBrun believes the Canadiens don’t want uncertainty over Bergevin’s contract status hanging over the club this season. The Canadiens GM garnered leverage with his club’s surprising march to the 2021 Stanley Cup Final, but that could evaporate if they struggle this season.

THE DENVER POST: Former NHL forward and current Colorado Avalanche color analyst Peter McNab has been diagnosed with cancer and is receiving treatment. The 69-year-old McNab will continue his role with Altitude Sports.

SPECTOR’S NOTE: Best wishes to McNab for a speedy and full recovery.

NBC SPORTS PHILADELPHIA: Flyers center Tanner Laczynski will require surgery on his left hip and could be sidelined for the season.

Per Coyotes, D Kyle Capobianco has a knee injury. He is considered day to day.