NHL.COM: The Washington Capitals defeated the Ottawa Senators 7-5 in a wild game that saw Washington’s T.J. Oshie and Ottawa’s Drake Batherson each tally a hat trick. Capitals captain Alex Ovechkin scored twice to move within four goals of Brett Hull (741) for fourth place among the all-time goal leaders. With seven goals, he takes over the goal-scoring lead from Edmonton’s Connor McDavid. The Capitals led 4-1 at one point but the Senators stormed back to tie it in the second period to make it interesting before the Caps regained the lead. 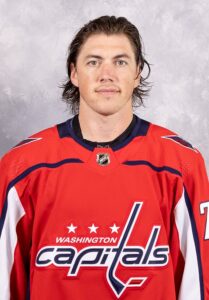 Jonathan Huberdeau, Sam Bennett and Brandon Montour had two-point performances and Joe Thornton scored his first goal of the season as the Florida Panthers beat the Arizona Coyotes 5-3. The Panthers take over first place in the overall standings with a 6-0-0 record. Coyotes goalie Carter Hutton and defenseman Conor Timmins both left the game with lower-body injuries.

Carolina Hurricanes goaltenders Frederik Andersen made 24 saves against his former team to backstop his club over the Toronto Maple Leafs 4-1. Andrei Svechnikov and Jaccob Slavin each had two points for the Hurricanes, who remain unbeaten at 5-0-0. Auston Matthews tallied his first of the season (the 200th goal of his career) for the slumping Leafs, whose record drops to 2-4-1.

SPECTOR’S NOTE: Lots of unhappiness in Leafs Nation as their club’s early-season woes are drawing comparison to their similar difficulties two years ago. That led to a November coaching change as Sheldon Keefe replace Mike Babcock. Could Keefe face a similar fate if the Leafs fail to reverse their fortunes? Stay tuned…

Vladimir Tarasenko scored two goals and Ville Husso turned in a 34-save shutout as the St. Louis Blues blanked the Los Angeles Kings 3-0. The Blues extended their record to 5-0-0.

SPECTOR’S NOTE: The Blues, Hurricanes and Panthers join the Edmonton Oilers as the only clubs to remain unbeaten through their first five games of the season. It’s the first time in league history four teams begin the season with records of at least 5-0-0.

The Buffalo Sabres stunned the defending Stanley Cup champion Tampa Bay Lightning by a score of 5-1. Craig Anderson made 35 saves for the win while Victor Olofsson scored twice for the Sabres, who maintain their surprising hot start with a 4-1-1 record. The Lightning are still without winger Nikita Kucherov, who could be sidelined for another eight weeks by a lower-body injury.

SPECTOR’S NOTE: The Lightning definitely miss Kucherov’s offense but other factors are also behind their stumbling start. Their forward depth was depleted by this summer’s departures of Tyler Johnston, Blake Coleman, Yanni Gourde and Barclay Goodrow. A shortened offseason also gave them less time than most clubs to rest and prepare for this season.

Columbus Blue Jackets goaltender Elvis Merzlikins made 31 saves in a 4-1 victory over the Dallas Stars. On his way to pre-game warmups, Merzlikins was heckled by a Stars fan making a negative comment about the death of his close friend Matiss Kivlenieks, who was killed in a fireworks accident in July. “I was expecting a shutout because I believe in karma,” said Merzlikins. “There is some stupid people in this world. That was really, really bad what happened in the tunnel when I was walking out. There was a fan from Dallas who (provoked) me about Matiss.”

SPECTOR’S NOTE: There are some disgusting people in this world whose lives are so pathetic that their only source of joy is trying to incite sadness or anger in other people. Good on Merlikins for not letting that douchebag’s remarks knock him off his game.

A 28-save shutout by Jacob Markstrom and two goals from Andrew Mangiapane carried to the Calgary Flames to a 5-1 win over the New York Rangers. Blake Coleman and Mikael Backlund each had a goal and two assists for the Flames, who’ve now won three straight games.

SPECTOR’S NOTE: The move provides the Golden Knights some flexibility to call up a player or acquire one via trade. However, they must become cap compliant when Pacioretty returns to the lineup.

THE DENVER POST: Colorado Avalanche defenseman Samuel Girard is listed as day-to-day with an upper-body injury after being checked awkwardly into the board by the Lightning’s Steven Stamkos on Saturday.

SPECTOR’S NOTE: This is a difficult but invaluable story that everyone should read. Wilson’s tale will hopefully motivate other players with addictions to seek help and perhaps provoke more positive change with the NHL toward addressing this issue.