NHL.COM: The Carolina Hurricanes’ season-opening win streak ended at nine games as they fell to the Florida Panthers 5-2. Anthony Duclair led the way with two goals and two assists while Spencer Knight made 29 saves for the win. The Panthers played without captain Aleksander Barkov, who’s day-to-day with a lower-body injury. Hurricanes goalie Frederik Andersen was pulled after giving up four goals on 15 shots in the first period but returned in the second after backup Antti Raanta suffered an upper-body injury following a collision with Panthers forward Ryan Lomberg. The Panthers are now the only team unbeaten in regulation (10-0-1) this season. 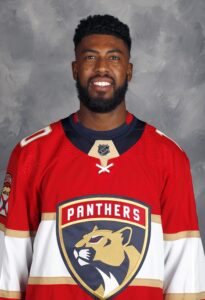 SPECTOR’S NOTE: Lomberg received a five-minute major and a game misconduct but I felt he shouldn’t have been penalized. He was in a puck race with Hurricanes defenseman Tony DeAngelo when Raanta came out of his net between the faceoff circles to play the puck. Lomberg had nowhere to go and inadvertently crashed into Raanta. I don’t feel there was a deliberate attempt to injure on his part.

The Arizona Coyotes overcame a 3-1 deficit to pick up their first win of the season (1-10-1) with a 5-4 victory over the Seattle Kraken. Lawson Crouse scored the winning goal just 13 seconds after the Kraken’s Mark Giordano tied the game late in the third period. Crouse had two goals on the night while teammate Shayne Gostisbehere collected three assists. Scott Wedgewood (27 saves) picked up the win replacing Karel Vejmelka after the latter gave up two goals on two shots within the first minute of the opening period.

A 24-save shutout by Ilya Sorokin carried the New York Islanders over the Winnipeg Jets 2-0. Anders Lee and Brock Nelson were the goal scorers. It was the 1, 500th career win for Islanders general manager Lou Lamoriello, moving him just six wins behind Glen Sather for second place on the all-time list. Nashville Predators GM David Poile is the leader with 1, 558 wins.

Calgary Flames goaltender Jacob Markstrom made 22 saves to pick up his league-leading fourth shutout of the season in a 6-0 rout of the New York Rangers. The Flames (7-1-3) have points in 10 consecutive games. Matthew Tkachuk had a goal and three assists while Johnny Gaudreau scored twice and set up another goal.

Mitch Marner collected four points (one goal, three assists), Auston Matthews and John Tavares each scored two goals and Jack Campbell kicked out 42 shots to give the Toronto Maple Leafs a 5-2 win over the Boston Bruins. Taylor Hall and David Pastrnak replied for the Bruins. The Leafs have won five straight games.

The Minnesota Wild overcame a 4-2 deficit to beat the Pittsburgh Penguins 5-4 on a shootout goal by Nick Bjugstad. Jared Spurgeon and Ryan Hartman tallied for the Wild to tie the game with the latter’s goal coming with just 2.2 seconds remaining. Kasperi Kapanen netted a hat trick for the Penguins while Bryan Rust add two assists in his first game since missing seven games to injury.

Three-point performances by Brayden Point (three assists) and Ondrej Palat (one goal, two assists) powered the Tampa Bay Lightning over the Ottawa Senators 5-3. Brady Tkachuk scored in his first game as the Senators’ new captain. After a slow start to the season, the Lightning are 6-3-2.

The Columbus Blue Jackets extended their record to 7-3-0 by doubling up the Colorado Avalanche 4-2 on three unanswered third-period goals by Alexandre Texier, Cole Sillinger and Oliver Bjorkstrand. Andre Burakovsky scored twice for the Avalanche, whose record drops to 4-5-1.

Martin Jones made 31 saves as the Philadelphia Flyers held off the Washington Capitals 2-1. Derick Brassard and Sean Couturier scored in the second period for the Flyers while Brett Leason netted the Capitals’ only goal. The Flyers are 6-2-2 in their opening 10 games.

Robin Lehner made 36 saves as the Vegas Golden Knights overcame a 2-0 deficit to down the Montreal Canadiens 5-2. Chandler Stephenson and Alex Pietrangelo each had a goal and an assist for the Golden Knights. The Canadiens are now 3-10-0 on the season.

SPECTOR’S NOTE: The Canadens dominated Vegas in the first period, outshooting them 20-1. If not for Lehner this could’ve been a blowout win for the Habs. Instead, they came out of that period with a 2-0 lead and collapsed in the second after the Golden Knights got their first goal.

A shootout goal by Damon Severson gave the New Jersey Devils a 3-2 win over the San Jose Sharks, giving them their first win in four games. Devils goalie Jonathan Bernier made 25 saves for the win.

The Chicago Blackhawks yesterday fired head coach Jeremy Colliton after the club lurched to a 1-9-2 start to this season. Rockford IceHogs coach Derek King was named as Colliton’s replacement on an interim basis.

SPECTOR’S NOTE: The Blackhawks had to do something to try and shake things up following this dreadful start to the season. Their poor performance is not entirely Colliton’s fault. As The Athletic’s Mark Lazerus observed, Colliton was the fall guy for management’s poor roster planning and shifting priorities. This is ultimately on former general manager Stan Bowman.