The Canucks get their first win following their coaching change, the Flyers lose again despite their shakeup behind the bench, plus the stars of the week and more in today’s NHL morning coffee headlines.

NHL.COM: The Vancouver Canucks picked up their first win under new head coach Bruce Boudreau by blanking the Los Angeles Kings 4-0. Thatcher Demko made 31 saves for the shutout, Brock Boeser tallied his first goal in 14 games and J.T. Miller had a goal and an assist. The Canucks hired Boudreau on Sunday after firing Travis Green and general manager Jim Benning. 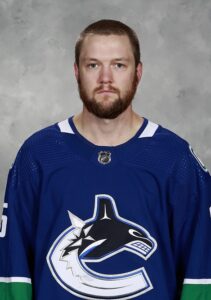 SPECTOR’S NOTE: Happy Canucks fans serenaded Boudreau with “Bruce, there it is!” to the tune of “Whoomp, There It Is.”

The Philadelphia Flyers replaced bench boss Alain Vigneault with Mike Yeo yesterday morning but they still fell 7-5 to the Colorado Avalanche to extend their winless skid to nine games (0-7-2). Avs rookie goalie Justus Annunen made 27 saves for his first NHL win, Mikko Rantanen and Erik Johnson each had two points and Cale Makar went end-to-end to score his 11th goal of the season. Claude Giroux scored twice for the Flyers.

Jake Guentzel extended his points streak to 13 games (two goals, one assist) as the Pittsburgh Penguins trounced the Seattle Kraken 6-1. Jeff Carter also scored twice and Danton Heinen had a goal and two assists. Kraken goalie Philipp Grubauer got the hook after giving up three goals on four shots in the first period.

Dallas Stars captain Jamie Benn scored twice and set up another to lead his club over the Arizona Coyotes 4-1. The Stars tied a franchise record with their seventh straight victory while the Coyotes dropped their third straight. Coyotes winger Loui Eriksson played his 1,000th career NHL game.

John Carlson netted the winner in overtime as the Washington Capitals nipped the Anaheim Ducks 4-3 to move into first place in the overall standings with 38 points. Capitals captain Alex Ovechkin collected two assists while Ducks forwards Trevor Zegras and Sonny Milano each had two points. The Capitals played without Garnet Hathaway as he joined Nic Dowd and Trevor van Riemsdyk on the COVID protocol list.

The Ottawa Senators picked up their third straight victory by downing the New Jersey Devils 3-2, handing the latter their fourth straight defeat. Josh Norris netted the winner in a shootout while Brady Tkachuk and Drake Batherson each had a goal and an assist.

THE DALLAS MORNING NEWS: Stars goaltender Ben Bishop begins a conditioning assignment with the club’s AHL affiliate Texas on Thursday. It will be his first game since the 2020 playoffs. He missed all of last season recovering from knee surgery in October 2020.

SPECTOR’S NOTE: This brings Bishop one step closer to rejoining the Stars lineup. They’re already carrying three goalies in Braden Holtby, Anton Khudobin and Jake Oettinger. They could end up sending the waiver-exempt Oettinger to the minors and trade Holtby or Khudobin to make room for Bishop in their crease and their salary-cap payroll.

MONTREAL GAZETTE: Canadiens goaltender Carey Price isn’t expected to return to the lineup before Christmas. Defenseman Joel Edmundson suffered another setback in his recovery from a back injury but won’t require surgery. The already injury-depleted Habs got more bad news as Tyler Toffoli is expected to miss some time with an upper-body injury while Jeff Petry (upper body) and Joel Armia (undisclosed) aren’t expected to play in tonight’s game against the Tampa Bay Lightning.

SPECTOR’S NOTE: Price has been skating on his own for a couple of weeks but he’s yet to begin workouts with full equipment. Don’t expect to see him until sometime in 2022.

BOSTON HOCKEY NOW: Former Bruin Tuukka Rask served as an emergency backup for the club in yesterday’s practice with goalie Linus Ullmark among several players sidelined by a non-COVID illness. An unrestricted free agent, Rask continues to work out at the Bruins’ practice facility as he works toward returning to NHL action in January.

SPECTOR’S NOTE: It was also an opportunity for the Bruins to get an early look at Rask’s conditioning and performance. It’s expected they will sign him once he’s cleared for game action next month.

STLTODAY.COM: Blues forward Robert Thomas has been sidelined by a lower-body injury that could keep him out of tonight’s game against the Florida Panthers.