NHL.COM: The Colorado Avalanche extended two winning streaks with a 4-1 victory over the Buffalo Sabres. They’ve won 10 straight and are undefeated at home in their last 20 (19-0-1). Mikko Rantanen and Valeri Nichushkin each had a goal and an assist as the Avs regained first place in the overall standings with 67 points. The Avalanche tied an NHL record for the most victories (15) in one month. 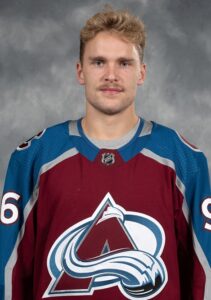 Speaking of unbeaten streaks, the Minnesota Wild extended theirs to nine games (8-0-1) by holding off the New York Islanders 4-3. Kirill Kaprizov, Joel Eriksson Ek and Matt Boldy each had a goal and an assist as the Wild (57 points) moved into third place in the Central Division. Wild winger Kevin Fiala collected an assist to extend his points streak to 11 games.

Andrei Svechnikov broked a 1-1 tie to lift the Carolina Hurricanes over the San Jose Sharks 2-1. Goaltender Frederik Andersen made 27 saves as the Hurricanes have won four straight and sit in first place in the Metropolitan Division with 64 points.

A third-period goal by K’Andre Miller lifted the New York Rangers to a 3-2 win over the Seattle Kraken. Igor Shesterkin kicked out 40 shots while teammate Mika Zibanejad had a goal and two assists to keep the Rangers (62 points) within two points of the Hurricanes.

Los Angeles Kings winger Trevor Moore tallied twice to beat the Pittsburgh Penguins 4-3. Kings captain Anze Kopitar collected two assists while Bryan Rust scored two goals for the Penguins. With 53 points, the Kings move within one point of the second-place Anaheim Ducks in the Pacific Division while the Penguins (61 points) remain one point behind the second-place Rangers in the Metro Division.

Tyler Seguin scored twice and picked up an assist while Jamie Benn had a goal and an assist as the Dallas Stars rolled to a convincing 6-1 win over the Boston Bruins. Dallas forward Roope Hintz reached the 20-goal mark for the first time in his career. The Stars moved into a tie with the Calgary Flames with 48 points but the Flames hold the final wild-card spot with two games in hand.

The Columbus Blue Jackets rode a four-goal first period to a 6-3 win over the Montreal Canadiens. Patrik Laine scored twice for the Jackets while Nick Suzuki had a goal and an assist for the Canadiens.

MONTREAL GAZETTE: Canadiens goaltender Carey Price spoke to the media yesterday for the first time since the Stanley Cup Final in July. He still hopes to return to action this season after suffering setbacks in his recovery from off-season knee surgery. Price also insisted he wants to remain with the Canadiens and has no plans to move anywhere.

SPECTOR’S NOTE: Price also entered the NHL/NHLPA player assistance program for a month back in October. He has been the subject of trade speculation as some pundits mused about whether he’ll want to stick with a struggling team that appears headed for a rebuild after this season. Even if he was willing to waive his no-movement clause, his injury and his $10.5 million cap hit through 2025-26 would ensure he remains in Montreal for the rest of this season and probably beyond.

← Sunday NHL Rumor Roundup - January 30, 2022 NHL Rumor Mill - January 31, 2022 →
We use cookies on our website to give you the most relevant experience by remembering your preferences and repeat visits. By clicking “Accept”, you consent to the use of ALL the cookies.
Do not sell my personal information.
Cookie SettingsAccept
Manage consent