NHL.COM: A hat-trick performance by Evgeny Kuznetsov set the stage for Lars Eller’s overtime goal as the Washington Capitals downed the Vancouver Canucks 4-3. Washington captain Alex Ovechkin picked up an assist but remains tied with Jaromir Jagr for third on the all-time goal list with 766. Defenseman Quinn Hughes had three points and Bo Horvat scored twice for the Canucks (65 points), who sit two points behind the Dallas Stars for the final wild-card berth in the Western Conference. The Capitals hold the final Eastern wild-card spot with 74 points, one back of the Boston Bruins. 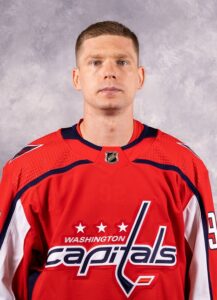 New York Islanders head coach Barry Trotz picked up his 900th career victory as his club rolled to a 5-2 win over the Winnipeg Jets. Trotz sits third on the all-time list, 69 wins behind second-place Joel Quenneville. Josh Bailey scored two goals while Semyon Varlamov picked up his first win since Jan. 18 with 27 saves. Kyle Connor netted his 36th goal of the season for the Jets (62 points), who remain five points out of a Western wild-card spot.

The Pittsburgh Penguins got a 40-save effort from Tristan Jarry and three unanswered third-period goals to defeat the Vegas Golden Knights 5-2. Bryan Rust and Jeff Carter each had a goal and an assist while Sidney Crosby collected an assist to extend his points streak to eight games. With 79 points, the Penguins move two points ahead of the New York Rangers into second place in the Metropolitan Division. The Golden Knights cling to third place in the Pacific Division with 68 points.

Zach Werenski’s tying goal late in the third period set the stage for Yegor Chinakhov’s shootout winner as the Columbus Blue Jackets upset the Minnesota Wild 3-2. Mats Zuccarello had a goal and an assist for Minnesota. It was a costly win for the Blue Jackets as Jakub Voracek and Patrik Laine left the game with apparent leg injuries. With 72 points, the Wild are one back of the second-place St. Louis Blues in the Central Division.

SPECTOR’S NOTE: Wild forward Marcus Foligno could face supplemental discipline for kneeing Voracek. The Jackets winger returned to the bench for overtime and the shootout but didn’t see a shift.

SPECTOR’S NOTE: Pavelski is taking a pay cut to stay in Dallas, completing a three-year deal worth an annual average value of $7 million. He was slated to become an unrestricted free agent this summer and frequently surfaced in the rumor mill as a trade candidate.

However, Pavelski indicated he and his family love living in Dallas and he remains committed to helping the Stars become a winner. The 37-year-old is their leading scorer with 59 points skating alongside Roope Hintz and rising star Jason Robertson. He’s a big reason why the Stars are jockeying for a wild-card spot in the Western Conference.

NHL.COM: Detroit Red Wings defenseman Marc Staal is set to play in his 1,000th career NHL game tonight against the Calgary Flames. He’ll join Eric and Jordan as the first three brothers in league history to reach the thousand-game milestone.

DETROIT FREE PRESS: Speaking of the Red Wings, forward Robby Fabbri is out for the remainder of the season after suffering a torn ACL in his right knee during Thursday’s loss to the Wild.

THE PHILADELPHIA INQUIRER: The floundering Flyers are on pace for the worst average attendance in 49 years. Their average announced home attendance is 16, 505 in an arena that seats over 19,000 fans. With the team in last place in the Metropolitan Division and a roster ravaged by injuries, fans have been tuning out.

SPECTOR’S NOTE: The article points out the number of actual fans at recent Flyers games is actually much lower than the announced paid attendance.