​The Hurricanes widen their lead in the Eastern Conference standings, Joe Pavelski reaches a career milestone, more front-office changes for the Blackhawks, and more in today’s NHL morning coffee headlines.

NHL.COM: The Carolina Hurricanes (81 points) opened a three-point lead over the Tampa Bay Lightning atop the Eastern Conference by downing the Pittsburgh Penguins 3-2. The Hurricanes overcame a 2-0 deficit on two goals by Jordan Staal, setting the stage for Andrei Svechnikov’s overtime winner. Sidney Crosby and Jake Guentzel each had a goal and an assist for the Penguins, who are four points behind the Hurricanes. 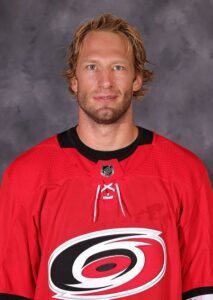 Speaking of the Lightning, Victor Hedman collected three assists in a 3-1 victory over the Detroit Red Wings. Lightning winger Nikita Kucherov had two assists while Brian Elliott picked up the win with 22 saves. The Bolts hold a one-point lead over the Florida Panthers for first place in the Atlantic Division.

Igor Shesterkin stopped 32 shots to backstop the New York Rangers to a 3-1 win over the New Jersey Devils. Mika Zibanejad and Chris Kreider each had a goal and an assist, with the latter tallying his 36th goal of the season to sit third in the NHL goal-scoring race. The Rangers (75 points) are two points behind the second-place Penguins in the Metropolitan Division.

A hat trick by Jason Robertson (including the winning goal in overtime) carried the Dallas Stars over the Winnipeg Jets 4-3. Stars forward Joe Pavelski picked up an assist to earn his 900th career point while goaltender Braden Holtby made 39 saves for the win. Jets winger Nikolaj Ehlers also had an assist as he returned to the lineup following a 19-game absence with a knee injury. The Stars (65 points) moved one point ahead of the Nashville Predators into the first wild-card berth in the Western Conference while the Jets (58 points) are six points behind the Predators.

SPECTOR’S NOTE: Keep an eye on the Jets over the next couple of weeks. They could become sellers by the March 21 trade deadline if they don’t gain ground in the Western Conference wild-card race. The Stars, meanwhile, are less likely to be sellers if they can maintain their hold on a playoff berth.

Viktor Arvidsson completed his hat trick with an overtime goal as the Los Angeles Kings overcame a 3-1 deficit to beat the Columbus Blue Jackets 4-3. The Kings sit in second place in the Pacific Division with 67 points.

Vegas Golden Knights forward Michael Amadio had a goal and two assists as his club held off the Anaheim Ducks 5-4, moving into third place in the Pacific Division with 66 points. Nicolas Roy also tallied twice for the Golden Knights. With 61 points, the Ducks are three back of the Predators.

Jeff Skinner scored two goals as the Buffalo Sabres upset the Minnesota Wild 5-4 to hand the latter their seventh loss in their last nine games. Kirill Kaprizov tallied twice for the Wild while linemate Mats Zuccarello missed this game with an undisclosed injury. Minnesota is third in the Central Division with 67 points.

NBC SPORTS CHICAGO: The Blackhawks announced yesterday that vice president of amateur scouting Mark Kelley and assistant GM of pro evaluation Ryan Stewart have left the team. The pair were part of the Blackhawks’ Stanley Cup wins in 2010, 2013 and 2015.

MONTREAL GAZETTE: The injury bug has bitten the Canadiens again as goaltender Andrew Hammond was placed on injured reserve. Cayden Primeau has been recalled from Laval.

THE HOCKEY NEWS: Top Russian prospects such as Danila Yurov and Alexander Perevalov could see their stock plummet in this year’s NHL draft due to their country’s invasion of Ukraine and the subsequent international sanctions and bans implemented upon Russian hockey as a result.

← NHL Rumor Mill - March 4, 2022 NHL Rumor Mill - March 5, 2022 →
We use cookies on our website to give you the most relevant experience by remembering your preferences and repeat visits. By clicking “Accept”, you consent to the use of ALL the cookies.
Do not sell my personal information.
Cookie SettingsAccept
Manage consent