NHL.COM: Down 6-2 to the New Jersey Devils entering the third period, the Florida Panthers scored four unanswered goals and emerged with a 7-6 victory on Gustav Forsling’s overtime goal. Forsling and Aleksander Barkov each scored twice. Spencer Knight got the win as he replaced goaltender Sergei Bobrovsky in the third period. Yegor Sharangovich tallied a hat trick for the Devils. The Panthers became the second team to reach 100 points this season and hold a two-point lead over the Carolina Hurricanes for first place in the Eastern Conference. 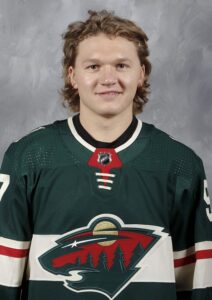 Minnesota Wild winger Kirill Kaprizov had a goal and an assist in his club’s 3-1 win over the Hurricanes to set a new franchise single-season record of 85 points (and counting). Marc-Andre Fleury kicked out 37 shots as the Wild have a three-point lead over the St. Louis Blues for second place in the Central Division with 89 points.

SPECTOR’S NOTE: Wild rookie Matt Boldy missed this game as he’s listed as day-to-day with an upper-body injury. He has 27 points in 35 games this season.

The Colorado Avalanche are on the verge of becoming the first team to clinch a playoff berth after downing the Pittsburgh Penguins 3-2. Devon Toews snapped a 2-2 tie in the third period as the Avalanche hold a four-point lead over the Panthers for first overall in the league standings with 104 points. Mikko Rantanen and Nathan MacKinnon each had two points while Darcy Kuemper stopped 38 shots. Jake Guentzel had two assists for the Penguins (92 points), who sit one point back of the second-place New York Rangers in the Metropolitan Division.

SPECTOR’S NOTE: Avalanche center Nazem Kadri missed this game with an upper-body injury and could be sidelined for some time. He’s expected to be back for the playoffs which begin on May 2.

Penguins coach Mike Sullivan said the club is optimistic over the status of winger Jason Zucker as they await further updates on his condition. Zucker’s been sidelined since Thursday after suffering an apparent leg injury against the Wild.

Tyler Seguin collected three assists and Joe Pavelski had a goal and an assist as the Dallas Stars held off the San Jose Sharks 5-4 to regain the second wild-card berth in the Western Conference with 81 points. Roope Hintz and Jason Robertson also each had two-point performances for the Stars. Sharks defenseman Mario Ferraro returned to the lineup after being sidelined for five weeks by a broken leg.

Los Angeles Kings forwards Anze Kopitar and Adrian Kempe each had a goal and an assist in a 3-2 win over the Winnipeg Jets. With the win, the Kings (86 points) moved within three points of the first-place Calgary Flames in the Pacific Division. Connor Hellebuyck made 35 saves for the Jets (76 points), who slip five points behind the Stars in the race for the final Western wild-card berth.

Speaking of the Flames, they dropped a 6-4 decision to the St. Louis Blues. Justin Faulk had a goal and two assists while teammates Brayden Schenn, Robert Thomas and Brandon Saad each had two points for the Blues (86 points), who sit three points back of the second-place Wild in the Central Division. Johnny Gaudreau scored his 32nd goal of the season for the Flames, who announced before the game that center Sean Monahan will undergo season-ending surgery on his left hip. Flames defenseman Oliver Kylington also missed this game as he’s day-to-day with an upper-body injury.

SPECTOR’S NOTE: It’s the same procedure Monahan had done on his right hip last year. His performance seemed to suffer in the aftermath of that first surgery, making him the topic of trade speculation. He has a year remaining on his contract with an annual average value of $6.375 million.

Auston Matthews tallied his league-leading 51st goal of the season, Morgan Rielly a goal and two assists while Mitch Marner and Michael Bunting each collected two assists in a 6-3 victory over the Philadelphia Flyers. Leafs goaltender Jack Campbell made 29 saves as he returned to action after missing 10 games with a rib injury. The Leafs are tied with the Tampa Bay Lightning with 93 points but hold second place in the Atlantic Division with 44 wins.

SPECTOR’S NOTE: Flyers defenseman Keith Yandle was a healthy scratch, bringing his NHL-record consecutive game streak to an end at 989. Flyers coach Mike Yeo faced criticism for benching Yandle given the club is eliminated from the playoffs and the blueliner only needed 11 more games to extend his record to 1,000 games.

Yeo explained it was part of the club’s decision to evaluate younger players for next season. Yandle took the decision in stride, saying management had spoken to him about the club’s plans over the final weeks of the regular season.

The Lightning, meanwhile, fell to the Montreal Canadiens 5-4 on a shootout goal by Nick Suzuki. Jake Allen made 37 saves for the Canadiens as they got the win in Martin St. Louis’ first game as head coach against his former club in Tampa Bay. Nikita Kucherov had a goal and two assists for the Lightning.

Boston Bruins center Erik Haula scored twice in a 5-2 win over the Columbus Blue Jackets. Brad Marchand had a goal and two assists for the Bruins (91 points) as they opened a seven-point lead over the Washington Capitals for the first wild-card berth in the Eastern Conference.

← NHL Rumor Mill - April 2, 2022 Sunday NHL Rumor Roundup - April 3, 2022 →
We use cookies on our website to give you the most relevant experience by remembering your preferences and repeat visits. By clicking “Accept”, you consent to the use of ALL the cookies.
Do not sell my personal information.
Cookie SettingsAccept
Manage consent