The Hurricanes take a 2-0 series lead over the Bruins, the Lightning, Oilers and Wild tie their opening-round series, and more in today’s NHL morning coffee headlines.

NHL.COM: The Carolina Hurricanes became the first team in the 2022 Stanley Cup Playoffs to open a 2-0 lead in the opening-round best-of-seven series with a 5-2 victory over the Boston Bruins. Pyotr Kochetkov made 30 saves in relief of an injured Antti Raanta for the win in his first-ever NHL playoff game. Sebastian Aho and Nino Niederreiter each scored twice for the Hurricanes. Patrice Bergeron scored both goals for the Bruins, who also lost defenseman Hampus Lindholm following a thunderous hit from Hurricanes winger Andrei Svechnikov in the second period.

SPECTOR’S NOTE: Raanta was sidelined in the first period following a collision with Bruins winger David Pastrnak. His status, and that of Lindholm, remains uncertain as there was no update on their respective conditions following this game.

Dominated by the Hurricanes for lengthy stretches in the first two games, the Bruins have been forced to play catch-up thus far in this series. I expect Jeremy Swayman to replace Linus Ullmark in goal for the Bruins as the series shifts to Boston for the next two games.

The Canes, meanwhile, will be hoping Raanta or sidelined starter Frederik Andersen will be ready for at least backup duty in Game 3. Third-stringer Kochetkov played well in Game 2 but they’re running out of healthy netminders with NHL experience. 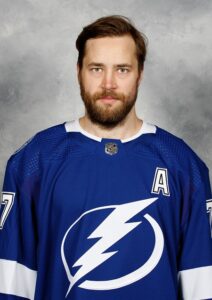 Tampa Bay Lightning defenseman Victor Hedman had a goal and three assists as his club held off the Toronto Maple Leafs 5-3, tying their first-round series at a game apiece. Nikita Kucherov had a goal and two assists for the Lightning. Auston Matthews and Mitch Marner each had two points for the Leafs while teammate Michael Bunting scored in his return to the lineup after being sidelined by injury on April 23. The series moves to Tampa Bay for the next two games.

SPECTOR’S NOTE: The Lightning rebounded well from their lopsided loss in Game 1. They made the Leafs pay for their undisciplined play in this contest, going three for seven on the power play.

Speaking of bounce-back performances, the Edmonton Oilers blanked the Los Angeles Kings 6-0 to tie their opening-round series 1-1. Mike Smith picked up the shutout with a 30-save effort while Evander Kane scored twice and collected an assist. Games 3 and 4 of this series will be played in Los Angeles.

SPECTOR’S NOTE: The Oilers blew this one open with three goals in the second period, outshooting the Kings 19-9 in that frame. They remain lethal with the man advantage in this series, going two for four on the power play for the second straight contest.

Minnesota Wild winger Kirill Kaprizov had a hat trick and teammate Joel Eriksson Ek tallied twice in a 6-2 victory over the St. Louis Blues, tying their series at one apiece. Marc-Andre Fleury kicked out 32 shots for the win. Vladimir Tarasenko had a goal and an assist for the Blues.

St. Louis defenseman Robert Bortuzzo left the game after being struck in the head by a puck in the first period. Blues rearguards Marco Scandella and Nick Leddy missed Game 2 with injuries while sidelined Scott Perunovich won’t be ready for Game 3.

NHL.COM: Anaheim Ducks captain Ryan Getzlaf, Colorado Avalanche center Nazem Kadri, New Jersey Devils defenseman P.K. Subban and Vegas Golden Knights winger Max Pacioretty are among this season’s 32 players nominated for the King Clancy Memorial Trophy. The award is presented annually to the player “who best exemplifies leadership qualities on and off the ice and has made a noteworthy humanitarian contribution to the community.”

NBC SPORTS WASHINGTON: Capitals winger Tom Wilson (lower-body injury) is a game-time decision for Game 2 of his club’s series with the Florida Panthers on Thursday.

SPECTOR’S NOTE: The league’s expansion to 32 franchises has some pundits calling for an expansion from the current 16-team setup to 20 or 22 with a “play-in” round. The only way I see Bettman changing his mind is if it can be proven that expanding the format will bring about a significant increase in revenue. Any change to the current format will have to come from a majority of the NHL board of governors.

NORTHJERSEY.COM: The New Jersey Devils parted ways with assistant coaches Mark Recchi and Alain Nasreddine. No word on the future of head coach Lindy Ruff, who has a year remaining on his contract.

THE DALLAS MORNING NEWS: Former NHL player Mike Ribeiro has been charged with sexual assault stemming from two incidents last June in East Texas. He was arrested on April 28 and released the same day on a $200,000 bond.

DETROIT HOCKEY NOW: Frans Nielsen intends to retire after he plays for Denmark in the upcoming 2021 World Championships. The 38-year-old center spent 15 seasons with the New York Islanders and Detroit Red Wings and was bought out of the final year of his contract with the Wings last summer. He spent this season with Eisbaren Berlin, helping them win the German DEL championship.

SPECTOR’S NOTE: Nielsen was considered a solid two-way center during his playing prime. He finished with 167 goals and 306 points for 473 points in 925 NHL contests. Best wishes to Nielsen in his future endeavors.

← NHL Rumor Mill - May 4, 2022 NHL Rumor Mill - May 5, 2022 →
We use cookies on our website to give you the most relevant experience by remembering your preferences and repeat visits. By clicking “Accept”, you consent to the use of ALL the cookies.
Do not sell my personal information.
Cookie SettingsAccept
Manage consent