NHL.COM: The Colorado Avalanche are heading to the Stanley Cup Final after defeating the Edmonton Oilers 6-5 in Game 4 of the Western Conference Finals. Artturi Lehkonen scored in overtime as the Avs swept the Oilers, sending them to the Final for the first time since 2001. 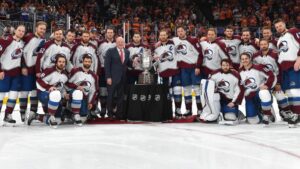 The Avalanche opened the scoring but the Oilers took leads of 3-1 and 4-2 before the Avs regained the lead on third-period goals by Gabriel Landeskog, Nathan MacKinnon and Mikko Rantanen. Zack Kassian scored late in the third to tie the game at five and force the extra frame.

SPECTOR’S NOTE: This game was the most exciting of this short series but it also had an air of inevitability about it. Despite the Oilers taking two 2-goal leads they simply lacked the goaltending and defensive depth to hold it.

The Avalanche are a much deeper club, enabling them to overcome those deficits and prevail in overtime. That included adjusting to the absence of center Nazem Kadri, who returned to Denver to repair a broken thumb suffered in Game 3. His return for the remainder of the postseason is questionable.

Injuries to some key players also hurt the Oilers in this series. Despite Draisaitl’s offensive heroics, he was pretty much playing on one leg after suffering an ankle injury during their first-round series with the Los Angeles Kings. Defenseman Darnell Nurse revealed he’d played the entire postseason with a torn hip flexor. Winger Kailer Yamamoto missed Game 4 with an upper-body injury suffered in Game 2.

BOSTON HOCKEY NOW: The Bruins yesterday announced they fired head coach Bruce Cassidy. During Cassidy’s six-year tenure behind the bench, they reached the playoffs six times, including the Stanley Cup Final in 2019.

SPECTOR’S NOTE: The Athletic’s Fluto Shinzawa cited front office unhappiness with Cassidy’s offensive tactics and approach to optimizing player performance (especially those of the younger players) as the reasons behind this move. However, he’s among the pundits who are critical of this move, suggesting the club’s Stanley Cup window is now closed. Some believe Cassidy is taking the fall for management’s missteps over the past six seasons.

SPECTOR’S NOTE: Congratulations to Connor for this well-deserved award. Like all the previous winners, he’s a fine example that this game can be played at a high level without resorting to questionable behavior or taking costly infractions.

TAMPA BAY TIMES: Lightning center Brayden Point remains sidelined by a lower-body injury and won’t suit up for Game 4 of the Eastern Conference Finals against the New York Rangers.

NHL.COM: Rangers center Ryan Strome is expected to play against the Lightning tonight after leaving Game 3 on Sunday with a lower-body injury.

TSN: Speaking of the Rangers, prospect winger Vitali Kravtsov has rejected an extension to his KHL contract and appears to be eyeing a return to the NHL next season.

SPECTOR’S NOTE: Time will tell if he’s back with the Rangers or another club. His falling-out with management over his playing time earlier this season prompted considerable trade speculation.

STLTODAY.COM: Blues captain Ryan O’Reilly said the lingering effect of COVID-19 took a toll on his performance this season. He had just five goals in 27 games before the Christmas break. His performance improved over the remainder of the campaign, finishing with 21 goals and 58 points, as well as seven goals and 12 points in 12 postseason games.

THE COLUMBUS DISPATCH’s Brian Hedger tweeted that Blue Jackets winger Patrik Laine has fully recovered from the back injury that sidelined him from the final seven games of the season. There’s no update, however, on the status of the restricted free agent’s contract negotiations.

CHICAGO SUN-TIMES: Long-time Blackhawks forward Eric Nesterenko passed away Monday at age 88. He spent 21 seasons in the NHL, starting in 1951-52 with the Toronto Maple Leafs before joining the Blackhawks in 1956-57, spending the remaining 16 seasons in Chicago and helping them win the Stanley Cup in 1961. He had 250 goals and 574 points in 1,219 games. Nesterenko appeared in the 1986 movie “Youngblood” and also served as a consultant on the film.

← NHL Rumor Mill - June 6, 2022 NHL Rumor Mill - June 7, 2022 →
We use cookies on our website to give you the most relevant experience by remembering your preferences and repeat visits. By clicking “Accept”, you consent to the use of ALL the cookies.
Do not sell my personal information.
Cookie SettingsAccept
Manage consent