NHL.COM: The Colorado Avalanche are Stanley Cup champions for the first time in 21 years. They defeated the defending champion Tampa Bay Lightning 2-1 in Game 6 of the 2022 Stanley Cup Final to take the best-of-seven series in six games. 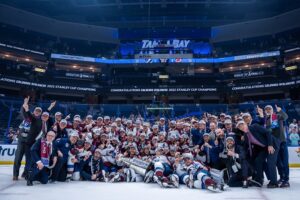 Nathan MacKinnon had a goal and an assist and Artturi Lehkonen tallied the game-winner as the Avalanche overcame a 1-0 deficit in the second period. Darcy Kuemper made 23 saves for the win. Steven Stamkos scored for the Lightning.

Avalanche defenseman Cale Makar won the Conn Smythe Trophy as the most valuable player in the postseason. The 23-year-old led the Avalanche with 29 points in 20 games. He’s the third defenseman in NHL history to win the Smythe and the James Norris Trophy as the top blueliner in the regular season, joining Bobby Orr (1970, 1972) and Nicklas Lidstrom (2002). He’s also the third defenseman to win the Smythe at 23 or younger, with Orr (1970) and Serge Savard (1969) as the others.

SPECTOR’S NOTE: Congratulations to Makar and to his Avalanche teammates for their well-deserved Stanley Cup championship. Their Stanley Cup parade in Denver will be held on Thursday, June 30, starting at 10 am local time.

SPORTSNET: Avalanche center Nazem Kadri revealed he suffered multiple breaks in his thumb in Game 3 of the Western Conference Finals with the Edmonton Oilers. He returned to action in Game 4 of this series and scored the overtime winner. Kadri also had some choice words for his critics. “For everyone that thought I was a liability in the playoffs, you can kiss my ass,” he said.

Avalanche head coach Jared Bednar has now won a championship in three professional leagues. He coached the South Carolina Stingrays to the ECHL’s Kelly Cup in 2009 and the Lake Erie Monsters to the AHL’s Calder Cup in 2016.

SPECTOR’S NOTE: Bednar’s first season behind the Avalanche bench in 2016-17 saw them finish with a league-worst record of 22-56-4, prompting some critics to suggest he was unsuitable to coach at the NHL level or not the right bench boss for a rebuilding club. The criticism resurfaced last year as the club failed to advance past the second round after winning the Presidents’ Trophy. However, Avalanche general manager Joe Sakic stuck with him and was rewarded for his loyalty.

NHL commissioner Gary Bettman was unavailable to present the Stanley Cup after being diagnosed with COVID-19. It’s the first time since he became commissioner in 1993 that he hasn’t presented the Cup to the winning team. Deputy commissioner Bill Daly did the honors in his absence.

SPECTOR’S NOTE: The presentation wasn’t the same without Bettman getting booed. In all seriousness, here’s hoping he makes a full recovery. The same goes to everyone else out there who’s also currently battling COVID-19.

It took only five minutes for the Stanley Cup to suffer some damage. Avalanche forward Nicolas Aube-Kubel accidentally dropped it as he was joining his teammates for the traditional post-game on-ice team photo, denting the base of the trophy.

THE DENVER POST: Avalanche forward Andre Burakovsky revealed he broke his right thumb during Game 2 of the Cup Final, sidelining him for the remainder of the series. Winger Valeri Nichushkin played through an ankle injury that he suffered in Game 5. Team captain Gabriel Landeskog skipped all the postseason morning skates as he continued to recover from the knee surgery he underwent near the end of the regular season.

SPORTSNET: Lightning center Brayden Point missed Game 6 with what was called a “severe injury” by coach Jon Cooper. Point suffered a lower-body injury in Game 7 of the first-round series with the Toronto Maple Leafs and missed the next two series. He returned for two games in the Final before leaving the lineup again.

SPECTOR’S NOTE: Cooper described the number of injuries suffered by his players during this postseason as “mind-boggling”. Details should emerge in the coming days. He said they would’ve had half of their minor-league team playing if it had been the regular season.

THE SCORE: Cooper and Lightning captain Steven Stamkos dismissed the idea that their time as Stanley Cup contenders is over. “Who says we’re done?” he told reporters following the game. Cooper pointed out his club has been to six Conference Finals in the past eight years.

SPECTOR’S NOTE: That will depend on what moves general manager Julien BriseBois makes in the offseason. I’ll have more on that in today’s Rumors update.

← Sunday NHL Rumor Roundup - June 26, 2022 NHL Rumor Mill - June 27, 2022 →
We use cookies on our website to give you the most relevant experience by remembering your preferences and repeat visits. By clicking “Accept”, you consent to the use of ALL the cookies.
Do not sell my personal information.
Cookie SettingsAccept
Manage consent