SPORTSNET: Zdeno Chara has signed a one-day contract with the Boston Bruins and has announced his retirement from the NHL after 24 seasons. P.K. Subban also announced he is retiring after 13 NHL seasons.

SPECTOR’S NOTE: This may be the first time that two former winners of the James Norris Memorial Trophy announced their retirements not just on the same day but within minutes of each other. 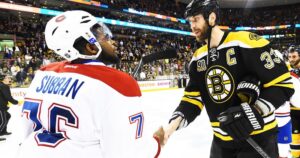 Chara became one of the best defensemen of his era. Debuting with the New York Islanders in 1997-98, the 6’9”, 250-pounder blossomed into a star after being traded to the Ottawa Senators in 2001, spending four seasons with them. He was a First-Team All-Star and a Norris Finalist in 2003-04 and was named to the Second Team in 2005-06.

It’s fitting that Chara is retiring as a Bruins. Joining them in 2006-07, Chara truly came into his own as a great all-around defenseman and a respected leader during his 14 seasons in Boston. He led them to three Stanley Cup Finals and one championship (2011), won the Norris in 2008-09 and become a finalist four times. He was also named to the First All-Star Team twice and was a three-time member of the Second All-Star Team.

Chara spent the final two seasons with the Washington Capitals and the Islanders. He holds the record for most games played by an NHL defenseman with 1,680, finishing with 680 career points and 2,085 PIMs, along with 70 points in 200 career playoff games. Don’t be surprised if he’s elected into the Hockey Hall of Fame on the first ballot.

Subban made his NHL debut in 2009-10 with the Montreal Canadiens. He quickly established himself as a gifted puck-moving defenseman with a hard shot from the point and was named to the All-Rookie Team in 2010-11. He netted 115 goals and 467 points in 834 career games and 62 points in 96 playoff contests.

A flashy, entertaining player personable with reporters and popular with fans, Subban’s seven seasons with the Canadiens were his best. He won the Norris Trophy in 2012-13 and earned a place on the First All-Star Team. He was named again to the First Team two years later and was also a Norris finalist that season.

Traded to the Nashville Predators in 2016, Subban helped them reach the 2017 Stanley Cup Final. He was named to the Second All-Star Team in 2017-18 and was again a finalist for the Norris. In 2019, he was traded to the New Jersey Devils where he spent the remainder of his career. He was honored with the King Clancy Memorial Trophy last season for his charitable work.

← NHL Rumor Mill - September 20, 2022 Colorado Avalanche Re-sign Nathan MacKinnon →
We use cookies on our website to give you the most relevant experience by remembering your preferences and repeat visits. By clicking “Accept”, you consent to the use of ALL the cookies.
Do not sell my personal information.
Cookie SettingsAccept
Manage consent