NHL.COM: The Detroit Red Wings extended their season-opening points streak to five games (3-0-2) by downing the Anaheim Ducks 5-1. Dominik Kubalik had a goal and two assists while Ville Husso made 32 saves for the win. Trevor Zegras scored the Ducks’ only goal as they finished their road trip 0-4-1. 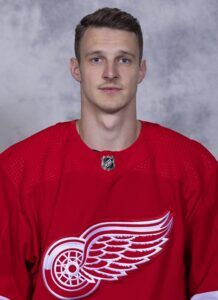 Third-period goals by Tyler Johnson and Jason Dickinson lifted the Chicago Blackhawks to a 5-4 victory over the Seattle Kraken. Johnson scored twice while Patrick Kane and Seth Jones each had two assists for the Blackhawks (3-2-0) as they staged their third straight comeback win. Jared McCann had a goal and an assist for the Kraken (2-3-2).

SPECTOR’S NOTE: Blackhawks goaltender Petr Mrazek missed this game with a groin strain and was placed on injured reserve.

A third-period goal by Ryan Lomberg enabled the Florida Panthers to hold off the New York Islanders 3-2. Anton Lundell and Eetu Luostarinen also scored for the Panthers (4-1-1) while Anders Lee tallied twice for the Islanders, who drop to 2-4-0.

Columbus Blue Jackets goaltender Daniil Tarasov made 30 saves for his first NHL win as he backstopped his club to a 5-1 victory over the New York Rangers. Jakub Voracek, Jack Roslovic and Liam Foudy each collected two assists for the Jackets (3-4-0). Artemi Panarin scored to extend his season-opening points streak to six games as the Rangers are 3-2-1 over the stretch.

SPECTOR’S NOTE: Rangers center Filip Chytil left the game in the first period about being elbowed in the head by Blue Jackets forward Cole Sillinger. He’s listed as day-to-day.

San Jose Sharks goalie James Reimer turned in a 30-save shutout to blank the Philadelphia Flyers 3-0. Erik Karlsson scored what proved to be the game-winner for the Sharks (2-6-0) while Flyers winger James van Riemsdyk left the game in the first period with an injured hand after blocking a shot. The Flyers are 4-2-0 under head coach John Tortorella.

SPECTOR’S NOTE: Tortorella wasn’t pleased with the performance of his leading scorers Kevin Hayes and Travis Konecny in this contest. He sent a message by benching them for the entire third period.

THE DENVER POST: The Colorado Avalanche will be without team captain Gabriel Landeskog for the next three months as he recovers from knee surgery. They’re turning to leadership by committee to fill the void left by Landeskog’s absence.

NHL.COM: Dallas Stars forward Tyler Seguin admitted he thought about retirement in January 2021 as he was recovering from hip surgery. “I looked over at my friend and said, ‘I don’t know if I’ll ever be able to play anymore,’” he told Mike Zeisberger. He added that he didn’t see any light at the end of the tunnel at the time.

SPECTOR’S NOTE: Seguin would return to play three games late in the 2020-21 season and skated in 81 last season. The 30-year-old current has five points in as many games this season and shows no lingering ill effects from his surgery.

LAS VEGAS REVIEW-JOURNAL: Golden Knights winger Phil Kessel is set to tie the NHL’s Ironman record for consecutive games played (989) held by Keith Yandle when he skates against the Toronto Maple Leafs on Monday night. The 35-year-old Kessel can break the record on Tuesday against the San Jose Sharks.

SPECTOR’S NOTE: It’s fitting that Kessel will tie the record against the Leafs in Toronto, where he played six seasons from 2009-10 to 2014-15.

THE TENNESSEAN: Nashville Predators defenseman Mark Borowiecki is resting at home and suffered no major injuries after crashing awkwardly into the boards during Saturday’s game against the Flyers. Borowiecki was stretchered from the ice and sent to a hospital for observation.

Former NHL defenseman Michal Kempny has signed with Czechia club HC Sparta for the next two seasons. His contract with the Seattle Kraken was terminated by mutual agreement after he cleared unconditional waivers last week.

← Sunday NHL Rumor Roundup - October 23, 2022 NHL Rumor Mill - October 24, 2022 →
We use cookies on our website to give you the most relevant experience by remembering your preferences and repeat visits. By clicking “Accept”, you consent to the use of ALL the cookies.
Do not sell my personal information.
Cookie SettingsAccept
Manage consent