Recaps of Thursday’s games, the league could consider changing its schedule next season to encourage more rivalries and more in today’s NHL Morning Coffee Headlines.

NHL.COM: The Los Angeles Kings overcame a 2-0 deficit to upset the Boston Bruins 3-2 on a shootout goal by Trevor Moore. Adrian Kempe scored twice in the third period and Pheonix Copley made 33 saves for the Kings, who improved their record to 16-12-5. Taylor Hall and Brad Marchand tallied for the Bruins (23-4-2), who remain first overall with 48 points.

SPECTOR’S NOTE: Earlier in the day, the Kings announced Moore signed a five-year contract extension worth an average annual value of $4.2 million. The 27-year-old winger was eligible to become an unrestricted free agent and is earning $1.875 million on his current deal. He’s turned into a reliable second-line winger for the Kings with 18 points in 33 games this season.

A two-goal performance by Reilly Smith carried the Vegas Golden Knights to a 4-1 victory over the Chicago Blackhawks. Logan Thompson made 24 saves for the win as the Golden Knights (22-9-1) moved one point ahead of the New Jersey Devils into second place in the overall standings with 45 points. Blackhawks winger Tyler Johnson reaggravated his left ankle and didn’t play in the third period as his club fell into last overall with a record of 7-17-4 (18 points).

The Devils, meanwhile, dropped a 2-1 decision to the Philadelphia Flyers. Travis Konecny broke a 1-1 tie in the third period while Carter Hart stopped 48 shots as they improved to 10-14-7. Jack Hughes scored for the 21-7-2 Devils. The Flyers played without Tony DeAngelo as he was placed on non-roster status for personal reasons due to the death of his grandmother.

SPECTOR’S NOTE: My condolences to DeAngelo and his family.

The Dallas Stars rode a 45-save performance by Jake Oettinger to a 2-1 win over the Washington Capitals. Jamie Benn and Colin Miller scored in the third period as the Stars improved to 18-8-5 on the season. Connor Sheary tallied for the Capitals (15-13-4) while Alex Ovechkin remains at 800 career goals, one back of Hall-of-Famer Gordie Howe.

Pittsburgh Penguins winger Jake Guentzel scored two goals while Kris Letang had a goal and an assist to double up the Florida Panthers 4-2. Sidney Crosby collected two assists for the 18-8-4 Penguins. The Panthers (14-13-4) played without Matthew Tkachuk as the winger was sidelined by a non-COVID-related illness. 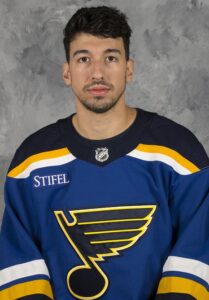 SPECTOR’S NOTE: Penguins center Evgeni Malkin scored but left the game because the puck deflected in off his right knee, leaving him in considerable pain. However, he’s expected to be okay. Following the game, Penguins head coach Mike Sullivan said the preliminary prognosis is positive.

A shootout goal by Jordan Kyrou lifted the St. Louis Blues to a 4-3 comeback win over the Edmonton Oilers. Kyrou scored and collected two assists in regulation as Robert Thomas and Vladimir Tarasenko scored two unanswered goals in the third period for the 14-15-1 Blues. Connor McDavid scored his league-leading 27th goal and become the first NHL player this season to reach 60 points but his Oilers dropped to 17-13-1.

Tampa Bay Lightning forward Brandon Hagel scored twice and added an assist in a 4-1 win over the Columbus Blue Jackets. Nikita Kucherov had three assists for the 19-9-1 Lightning while the Jackets fall to 10-17-2.

An overtime goal by Kyle Connor lifted the Winnipeg Jets over the Nashville Predators 2-1. Dylan DeMelo also scored for the Jets as they improved to 19-9-1. Filip Forsberg replied for the Predators (12-12-4) while teammate Juuse Saros stopped 39 shots. Jets defenseman Nate Schmidt left this game with an upper-body injury.

A 39-save performance by Ukko-Pekka Luukkonen gave the Buffalo Sabres a 4-2 victory over the Colorado Avalanche. Tage Thompson and Rasmus Dahlin each had a goal and an assist for the Sabres (14-14-2). Valeri Nichushkin collected two assists for the Avalanche (15-11-2). Colorado winger Evan Rodrigues returned to action for the first time since suffering a leg injury on Nov. 23.

SPECTOR’S NOTE: Thompson sits second to McDavid with 24 goals on the season. Meanwhile, Sabres defenseman Owen Power missed this game after suffering a lower-body injury during the pregame warm-up.

The Carolina Hurricanes extended their points streak to nine games as they held off the Seattle Kraken by a score of 3-2. Andrei Svechnikov netted his team-leading 16th goal of the season for the Hurricanes (17-6-6). Kraken goalie Philipp Grubauer kicked out 36 shots but his club dropped to 16-10-3.

The Anaheim Ducks blew a 2-0 lead but netted three unanswered third-period goals to beat the Montreal Canadiens 5-2. John Klingberg tallied twice for the Ducks (8-20-3) as they snapped a nine-game road losing streak. Cole Caufield tallied both goals for the 14-14-2 Canadiens.

SPORTICO: The NHL is said to be considering overhauling its schedule for next season to create more games between geographical rivals in the hope of generating more revenue. It could result in those rivals playing as many as eight times in a season.

TSN: Chris Johnston reports he’s told it’s “not accurate” that teams will meet as much as eight games in a season. While some teams would like to face rivals more often, Johnston said there’s only so much that can be done if teams are going to play in all 32 arenas in a season.

SPECTOR’S NOTE: The league has increased games among rivals with mixed results.

While some rivalries are long-standing and popular among their supporters, it comes at the cost of seeing stars from other clubs less often. For example, increasing the number of regular-season meetings between the Calgary Flames and Edmonton Oilers would mean fans in other NHL cities would see less of a superstar like Connor McDavid, who can be a good box-office draw for struggling clubs.

Another problem with staging more games against rivals is when one of the teams is among the league’s top clubs while the other is rebuilding. Fans want intense, evenly-matched games in those series. It takes the shine off those match-ups if one of the teams is dominating the other.