NHL.COM: Nashville Predators captain Roman Josi became his club’s all-time leading scorer in a 4-2 win over the Chicago Blackhawks. Josi scored the game-winning goal and collected an assist to reach 567 career points, surpassing David Legwand’s 566 points. Juuse Saros made 37 saves for the win as the Predators improved to 14-13-4. Connor Murphy had a goal and an assist for the Blackhawks (7-20-4), who remain last overall in the standings. 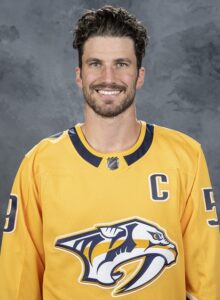 Vegas Golden Knights captain Mark Stone made franchise history in his club’s 5-2 victory over the Arizona Coyotes. Stone became the first Golden Knights player to score a power-play goal and a shorthanded goal in the same game as he finished the night with three points. Vegas (23-11-1) sits in first place in the Western Conference and second in the overall standings with 47 points.

The New Jersey Devils snapped a five-game losing skid with three unanswered third-period goals to double up the Florida Panthers 4-2. Jesper Bratt scored twice and Mackenzie Blackwood made 34 saves in his first start since Nov. 3. The Devils (22-9-2) sit in third place in the Eastern Conference with 46 points.

SPECTOR’S NOTE: Earlier in the day, Panthers head coach Paul Maurice said winger Patric Hornqvist could remain sidelined long-term as he continues to recover from a concussion suffered on Dec. 3 against the Seattle Kraken.

Three unanswered third-period goals by Warren Foegele, Connor McDavid and Mattias Janmark lifted the Edmonton Oilers over the Dallas Stars 6-3. Janmark scored twice, McDavid extended his points streak to 14 games and Ryan Nugent-Hopkins had a three-point performance for the Oilers (18-14-2). Mason Marchment had two assists for the 19-9-6 Stars, who hold a one-point lead with points over the Winnipeg Jets for first place in the Central Division.

SPECTOR’S NOTE: The Stars were without winger Denis Gurianov, who’s on an indefinite leave of absence for family reasons.

The Detroit Red Wings scored four goals in the third period in a 7-4 romp over the Tampa Bay Lightning. Michael Rasmussen scored twice and added two assists while Dylan Larkin tallied twice as the Red Wings (14-11-7) snapped a six-game winless skid. Nikita Kucherov had a goal and an assist for the Lightning (20-11-1) as they sit in third place in the Atlantic Division with 41 points.

An overtime goal by Mikko Rantanen lifted the Colorado Avalanche to a 2-1 win over the Montreal Canadiens. Artturi Lehkonen scored the tying goal for the Avs (18-11-2) as they hold the first wild-card berth in the Western Conference with 38 points. Jake Allen made 34 saves for the 15-15-3 Canadiens.

Minnesota Wild forward Matt Boldy had a goal and two assists in a 4-1 victory over the Anaheim Ducks. The Wild (19-11-2) sit in third place in the Central Division with 40 points, three behind the second-place Winnipeg Jets. Lukas Dostal stopped 38 shots for the 9-22-3 Ducks.

OTTAWA SUN: The Senators signed Artum Zub to a four-year contract extension. The 27-year-old defenseman will earn an average annual value of $4.6 million starting in 2023-24.

SPECTOR’S NOTE: Zub is completing a two-year deal with a $2.5 million AAV. He’s become an invaluable part of the Senators’ defense corps. Injuries have limited him to 14 games so far this season but he netted 22 points in 81 games in 2021-22.

The Senators’ blueline is better with a healthy Zub in the lineup. One could quibble over the AAV on his new contract but it’s not extravagant and the term of the contract is reasonable.

NHL.COM: The Tampa Bay Lightning-Buffalo Sabres game scheduled for Dec. 23 has been postponed due to inclement weather expected for Buffalo on that day. It has been rescheduled to March 4, 2023.

THE PHILADELPHIA INQUIRER: The Flyers game with the Sabres scheduled for March 4 has been rescheduled to Jan. 9, 2023.