The Canucks’ Elias Pettersson had a five-point performance, the Hurricanes’ Brent Burns reaches a points milestone, another record falls to Alex Ovechkin and more in today’s NHL Morning Coffee Headlines

NHL.COM: The Vancouver Canucks nipped the Seattle Kraken 6-5 on a shootout goal by Elias Pettersson, who also had a five-point performance (two goals, three assists) in regulation play, including his game-tying goal. The Canucks improved to 14-15-3. Daniel Sprong tallied twice for the 18-10-4 Kraken, who sit fifth overall in the Western Conference with 40 points. 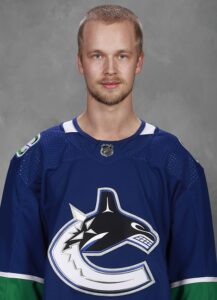 The Boston Bruins overcame a 2-0 deficit to defeat the Winnipeg Jets by a score of 3-2. Nick Foligno broke a 2-2 tie in the third period as the league-leading Bruins improved to 26-4-2 (54 points). They sit six points ahead of the second-place Carolina Hurricanes in the overall standings. The Jets (21-11-1, 43 points) sit one point behind the Central Division-leading Dallas Stars.

Speaking of the Hurricanes, they improved to 21-6-6 (48 points) by dropping the Pittsburgh Penguins 4-3 on an overtime goal by Jaccob Slavin. Hurricanes defenseman Brent Burns’ assist on Slavin’s goal was his 800th career point. Sidney Crosby tallied his 19th goal of the season for the Penguins (19-9-5), who sit in third place in the Metropolitan Division with 43 points.

Washington Capitals captain Alex Ovechkin collected two assists in a 3-2 victory over the Ottawa Senators. Marcus Johansson scored the game-winner in overtime while Ovechkin set an NHL record for career shots-on-goal with 6,211. The Capitals improved to 18-13-4 while the Senators dropped to 14-16-3.

The Toronto Maple Leafs held off the Philadelphia Flyers 4-3 with William Nylander scoring a goal and collecting two assists. The Leafs (21-7-6) are unbeaten at home in their last 10 games (8-0-2). They also sit third overall in the overall standings with 48 points as the Hurricanes hold a game in hand. Travis Konecny and Tony DeAngelo each had two points for the 11-16-7 Flyers.

San Jose Sharks defenseman Erik Karlsson had a goal and three assists to lead his club to a 5-2 upset of the Minnesota Wild. Tim Meier had a goal and an assist for the Sharks (11-18-6). The Wild (19-12-2) remain three points back of the Jets in the Central Division with 40 points.

Three unanswered third-period goals by Barclay Goodrow, Kaapo Kakko and Vincent Trocheck lifted the New York Rangers over the New York Islanders 5-3. Goodrow had a three-point night for the Rangers (19-11-5) as they sit fourth in the Metropolitan Division with 43 points as the Penguins hold a game in hand. Mathew Barzal had a goal and an assist for the 18-14-2 Islanders.

An overtime goal by Adrian Kempe gave the Los Angeles Kings a 4-3 win over the Calgary Flames. Gabriel Vilardi and Blake Lizotte each had a goal and an assist for the Kings (19-12-5) as they sit second in the Pacific Division with 43 points. The Flames dropped to 15-12-7.

SPECTOR’S NOTE: The Kings activated Brendan Lemieux off injured reserve but he didn’t play in this game.

BOSTON HOCKEY NOW: The Bruins announced yesterday that they’ve completed their independent review of their vetting process in the aftermath of the botched Mitchell Miller signing on Nov. 4. The review revealed “no misconduct” by team executives but provided a list of specific recommendations to be implemented to prevent a recurrence of the same mistake.

SPECTOR’S NOTE: As Daily Faceoff’s Frank Seravalli observed, the “independent review” was hardly independent since it was initiated and funded by the Bruins. He also noted that the exact findings and substance of the review were not publicly released, as other teams have done following internal reviews.

As Seravalli’s colleague Matt Larkin observed back in November, the Bruins embarrassed themselves and insulted our intelligence with the Miller affair.

The NHL has postponed Friday’s games between the Tampa Bay Lightning and Buffalo Sabres and the Detroit Red Wings versus the Ottawa Senators due to extreme weather conditions. Both games have been rescheduled for the new year.

DAILY FACEOFF: Canada has revealed its roster for the upcoming Spengler Cup in Davos, Switzerland. It features such former NHL players as Tyler Ennis, David Desharnais, Brett Connolly, Cody Eakin, Riley Nash and Michael Hutchinson. This is the first Spengler Cup tournament to be staged since 2019 as COVID-19 led to the cancellation of the 2020 and 2021 tournament.