NHL.COM: The Calgary Flames fired a franchise-record 62 shots at the Columbus Blue Jackets in a 6-0 victory. Johnny Gaudreau collected three assists, Matthew Tkachuk scored two goals and Jacob Markstrom turned in a 23-save shutout. Blue Jackets goaltender Elvis Merzlikins made 56 saves. With 46 points, the Flames tie the Dallas Stars but take over the final wild-card berth in the Western Conference with two games in hand.

SPECTOR’S NOTE: Merzlikins wasn’t to blame for his club’s lopsided loss. His teammates let him down with a lousy defensive effort. They also lost center Alexandre Texier as he left the game with an injured hand.

Cale Makar’s overtime goal lifted the Colorado Avalanche to a 4-3 win over the Boston Bruins, extending their home winning streak to 17 games. They forced the extra frame with unanswered third-period goals by Samuel Girard and Gabriel Landeskog while Nazem Kadri finished the night with three assists. Charlie McAvoy collected two assists for the Bruins. The Avs are tied with the Florida Panthers with 63 points but hold first overall with two games in hand while the Bruins hold the final Eastern Conference wild-card spot with 51 points.

SPECTOR’S NOTE: It was a costly win for the Avs as center Nathan MacKinnon left the game following a hard hit from Bruins winger Taylor Hall. MacKinnon’s face was bloodied by his own stick following contact from Hall’s shoulder. He could miss the Avs’ upcoming game with the Chicago Blackhawks.

The Toronto Maple Leafs downed the Anaheim Ducks 4-3 on a shootout goal by Auston Matthews. Leafs goaltender Jack Campbell reached the 20-win mark in a season for the first time in his career as his club remains in third place in the Atlantic Division with 55 points. The Ducks picked up a point thanks to goalie John Gibson’s 41-save effort and sit in second place in the Pacific Division with 50 points.

SPECTOR’S NOTE: The Blackhawks have been trying to trade Strome since last season. The Athletic’s Scott Powers speculates his improved play of late might make him more enticing to other clubs if he keeps playing well between now and the March 21 trade deadline.

The San Jose Sharks got a 32-save performance from James Reimer to beat the Washington Capitals 4-1, handing the latter their third loss in the past four games. The win keeps the Sharks (46 points) in the hunt for the final wild-card berth in the Western Conference.

TRIBLIVE.COM: The Pittsburgh Penguins signed Jeff Carter to a two-year contract extension. The 37-year-old forward will receive an annual average value of $3.125 million with a full no-movement clause.

SPECTOR’S NOTE: A reasonable contract for a veteran forward who still has plenty left in the tank. He’s been a good fit with the Penguins since joining them in a trade last season. He’s sixth among their leading scorers this season with 12 goals and 26 points in 36 games.

Cap Friendly indicates this signing leaves the Penguins with $51.8 million invested in 10 players for 2022-23. Evgeni Malkin, Kris Letang, Bryan Rust and Kasperi Kapanen are among their free agents to be re-signed or replaced.

THE PROVINCE: The Vancouver Canucks officially announced Patrik Allvin as their new general manager. He’d been with the Penguins for 16 seasons and was named their assistant GM in 2020. Allvin previously worked with Canucks president Jim Rutherford during the latter’s tenure as Penguins GM.

SPECTOR’S NOTE: With the Canucks management team in place, there’s speculation big roster changes could be coming before the March trade deadline. I’ll have more about that in today’s NHL Rumor update.

OTTAWA SUN: Speaking of Batherson, he suffered a high-ankle sprain as a result of Dell’s actions. He was slated to play in the upcoming NHL All-Star Game and has been replaced by Brady Tkachuk. Batherson could be sidelined for months.

SPECTOR’S NOTE: Batherson is the Senators’ leading scorer so this is a significant blow to their offense.

TWINCITIES.COM: The Minnesota Wild got some good news as defenseman Jonas Brodin is set to return after missing several weeks with an upper-body injury.

NBC SPORTS CHICAGO: The Blackhawks intend to begin reaching out to potential general manager candidates for interviews this week. Current interim GM Kyle Davidson will also interview for the job.

NHL.COM: Philadelphia Flyers defenseman Keith Yandle set the NHL Ironman record by appearing in his 965th consecutive game but his club endured a franchise-record 13th straight loss by falling 4-3 to the New York Islanders. Zach Parise snapped a 3-3 tie in the third period for the Islanders. 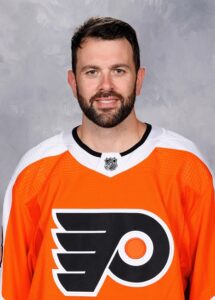 SPECTOR’S NOTE: Congratulations to Yandle on his record-setting achievement. It’s among the few bright spots in a miserable season for the Flyers. Their ongoing tumble in the standings won’t result in another coaching change. They’re sticking with interim bench boss Mike Yeo and hired John Torchetti as an assistant coach. The club is expected to evaluate its coaching staff at season’s end. Tochetti could be Yeo’s successor as he replaced him as Wild head coach in 2016.

The Florida Panthers opened a two-point lead (63 points) over the Colorado Avalanche and Tampa Bay Lightning atop the overall standings with a 5-3 victory over the Winnipeg Jets. Mason Marchment scored twice and chipped in an assist for the Panthers. The Jets (41 points) are five points out of the final wild-card berth in the Western Conference.

A four-point performance by Joe Pavelski (two goals, two assists) powered the Dallas Stars over the New Jersey Devils 5-1. Roope Hintz scored for the fourth straight game while Braden Holtby picked up the win with a 38-save performance. They played without defenseman John Klingberg, who’s day-to-day with an upper-body injury. With 46 points, the Stars vault into the final Western Conference wild-card spot.

The Pittsburgh Penguins tallied four straight third-period goals in a 6-3 victory over the Arizona Coyotes. Sidney Crosby and Bryan Rust each had a goal and two assists while Kris Letang tallied twice. Coyotes center Nick Schmaltz scored twice and collected an assist. With 59 points, the Penguins sit one point behind the first-place New York Rangers in the Metropolitan Division.

SPECTOR’S NOTE: The Penguins played without winger Jason Zucker as he underwent core-muscle surgery and will be sidelined indefinitely. He’s earning an annual average value of $5.5 million. The Penguins could use that as cap relief if he ends up on long-term injury reserve for the rest of the season, potentially allowing them space to become buyers at the March 21 trade deadline.

Sebastian Aho scored twice, including the winner in overtime, as the Carolina Hurricanes nipped the Vegas Golden Knights 4-3. Nolan Patrick had a goal and an assist for Vegas as they overcame a 3-1 deficit to force the extra frame. The Hurricanes sit one point back of the Penguins while the Golden Knights remain in first place in the Pacific Division with 53 points.

The Nashville Predators regained second place in the Central Division (57 points) by doubling up the Seattle Kraken 4-2. Filip Forsberg had a goal and an assist, Matt Duchene tallied his 20th goal of the season and Juuse Saros kicked out 33 shots for the Predators.

An overtime goal by Connor McDavid lifted the Edmonton Oilers to a 3-2 win over the Vancouver Canucks. The Oilers (42 points) move to within four points of the final Western wild-card spot. Spencer Martin made 47 saves in a losing cause for the Canucks, who sit one point behind the Oilers.

The Ottawa Senators got a hat trick from Tyler Ennis and a 32-save shutout from Matt Murray to blank the Buffalo Sabres 5-0. It was a costly win for the Senators as leading scorer Drake Batherson (34 points) left the game with an ankle injury after a questionable hit by Sabres goaltender Aaron Dell sent him crashing awkwardly into the boards. Dylan Gambrell also left the game in the first with an upper-body injury.

SPECTOR’S NOTE: The Sharks are battling for a wild-card spot in the Western Conference. Losing Karlsson will be a big blow to their blueline. He has 26 points in 33 games this season.

TSN: The Vancouver Canucks are reportedly close to naming Pittsburgh Penguins assistant general manager Patrik Allvin as their new GM. Allvin’s spent 16 seasons with the Penguins and worked for Canucks president Jim Rutherford during the latter’s tenure as Penguins GM.

OTTAWA SUN: Senators owner Eugene Melnyk isn’t pleased with the Ontario government’s COVID limitations on arena capacity. “They’re misinformed and they’re miscalculated. They should be challenged and they will be challenged.” The club was allowed to have 500 fans in attendance starting Monday, but they will play 11 games at home before restrictions are lifted to 50 percent capacity by Feb. 21.