The aftermath of a chaotic first round of the 2022 Draft, Joe Sakic was named GM of the Year, and more in today’s NHL morning coffee headlines.

NHL.COM: The Montreal Canadiens surprised the hockey world and made history by selecting winger Juraj Slavkovsky with the No. 1 pick in the 2022 NHL Draft, making him the first player from Slovakia to go first overall. The Canadiens bypassed center Shane Wright of the OHL’s Kingston Frontenacs, who had been ranked as the top prospect by NHL Central Scouting. 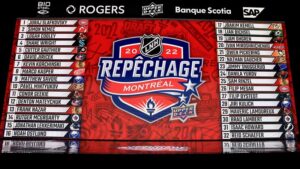 Further history was made when the New Jersey Devils chose defenseman Simon Nemec with the second-overall selection. Slavkovsky and Nemec are the first Slovakians to become the top-two players selected in an NHL draft.

Center Logan Cooley of the U.S. National Team Development Program (USNTDP) was selected by the Arizona Coyotes with the third-overall pick. Wright was chosen fourth overall by the Seattle Kraken.

The Canadiens also chose Slovakian winger Filip Mesar with the No. 26 pick. Meanwhile, the Coyotes selected center Conor Geekie (11th overall) from the WHL’s Winnipeg Ice and Maveric Lamoureux from the QMJHL’s Drummondville Voltigeurs at No. 29.

After starting Thursday with no picks in the first round, the Chicago Blackhawks wound up with three after shipping winger Alex DeBrincat to the Ottawa Senators, center Kirby Dach to the Canadiens and acquiring goalie Petr Mrazek as part of a return from the Toronto Maple Leafs. They chose defenseman Kevin Korchinski from the WHL’s Seattle Thunderbirds at No. 7, center Frank Nazar from the USNTDP at No. 13 and defenseman Sam Rinzel from Chaska High School at No. 25.

With two picks in the first round, the Columbus Blue Jackets selected Czechia defenseman David Jiricek sixth overall and blueliner Denton Mateychuk from the WHL’s Moose Jaw Warriors with the No. 12 pick.

The Buffalo Sabres had three selections in the first round, choosing Winnipeg Ice center Matthew Savoie ninth overall, Swedish center Noah Ostlund with the No. 16 selection and Czechia center Jiri Kulich at No. 28.

With two first-rounders, the Anaheim Ducks selected Pavel Mintyukov of the OHL’s Saginaw Spirit at No. 10 and center Nathan Gaucher of the QMJHL’s Quebec Remparts at No. 22. The Minnesota Wild used their two first-round picks to choose Swedish winger Liam Ohgren at No. 19 and Russian winger Danila Yurov at No. 24.

SPECTOR’S NOTE: You can see the full results from the first round by following the link above.

That was one of the wilder drafts regarding surprising selections and player movement via trades. You can read my take on those moves involving NHL players here.

Slafkovsky was as surprised as most in the Bell Centre by his selection as the first-overall pick. The big winger has the potential to become a scoring star in the NHL. He was named tournament MVP in the 2022 Beijing Olympics helping Slovakia win its first-ever medal (bronze) in men’s hockey with a tournament-leading seven goals.

Wright, meanwhile, admitted he’ll have a chip on his shoulder from this outcome which he intends to use as motivation in the future. His style of play drew comparisons to Boston Bruins captain Patrice Bergeron. The Kraken will have a future Selke Trophy center on their hands if he plays up to projections.

Rounds 2 through 7 will be held today at the Bell Centre in Montreal at 11 am ET.

THE HOCKEY NEWS: Center Jagger Firkus of the WHL’s Moose Jaw Warriors, defenseman Ryan Chesley of the USNTDP and blueliner Calle Odelius of Djurgardens in the Swedish Hockey League are among Tony Ferrari’s top-five prospects remaining after the first round. Center Jack Hughes of Northeastern University in the NCAA and winger Julian Lutz of EHC Munchen in Germany round out his list.

Joe Sakic of the Colorado Avalanche is the 2021-22 winner of the Jim Gregory General Manager of the Year Award.

SPECTOR’S NOTE: A well-deserved honor for Sakic who did a fine job building the Avalanche into the 2022 Stanley Cup champions.

TSN: Edmonton Oilers GM Ken Holland said he’s given defenseman Duncan Keith until Saturday whether he intends to play next season or retire. Keith, 38, has one year remaining on his contract. His retirement would free up $5.54 million in salary-cap space.

← Notable NHL Trades and Free Agent Signings - July 7, 2022 NHL Rumor Mill - July 8, 2022 →
We use cookies on our website to give you the most relevant experience by remembering your preferences and repeat visits. By clicking “Accept”, you consent to the use of ALL the cookies.
Do not sell my personal information.
Cookie SettingsAccept
Manage consent