NHL.COM: The New York Islanders picked up their ninth straight win by edging the New Jersey Devils 3-2 on a shootout goal by Oliver Wahlstrom. The Isles also extended their points streak to 12 games and sit atop the MassMutual Eastern Division with a league-leading 42 points. However, they also announced earlier yesterday that captain Anders Lee has been placed on long-term injury reserve retroactive to last Thursday, raising the possibility he could be unable to return for the regular season.

SPECTOR’S NOTE: That will allow the Islanders to exceed the $81.5 million salary cap by up to the equivalent of Lee’s annual average value ($7 million) if they wish to add players before the April 12 trade deadline. They’re already exceeding the cap with permanently sidelined defenseman Johnny Boychuk ($6 million AAV) on LTIR.

Dougie Hamilton and Nino Niederreiter scored as the Carolina Hurricanes extended their win streak to eight games by nipping the Detroit Red Wings 2-1. With the win, the Hurricanes (41 points) vaulted into first place in the Discover Central Division, one point ahead of the Tampa Bay Lightning. 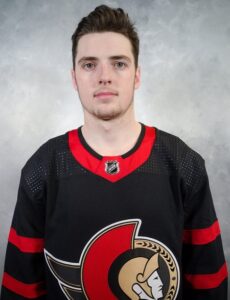 A three-goal third period lifted the Minnesota Wild to a 4-1 victory over the Arizona Coyotes. Kevin Fiala had a goal and an assist while Zach Parise collected two assists as the Wild (35 points) picked up their fourth straight win and moved within two points of the first-place Vegas Golden Knights in the Honda West Division. Wild forward Marcus Foligno missed the game with a lower-body injury and could be sidelined for a while.

The Ottawa Senators got two goals from Drake Batherson and rookie goalie Joey Daccord made 33 saves for his first NHL victory to hold off the Toronto Maple Leafs 4-3. The Senators opened the scoring with two goals within seven seconds. Daccord got the start when Matt Murray was a late scratch with an upper-body injury. Zach Hyman tallied twice for the Leafs (40 points), who remain in first place in the Scotia North Division but have dropped five of their last six games.

Nazem Kadri and Andre Burakovsky each had a goal and an assist to give the Colorado Avalanche a 4-1 win over the Los Angeles Kings. The victory gave the Avs 34 points, moving them into third place in the Honda West Division.

Alexander Radulov scored in a shootout as the Dallas Stars edged the Columbus Blue Jackets 2-1. It was Radulov’s first game since being sidelined on Feb. 4. The Jackets (29 points) sit four points behind the fourth-place Chicago Blackhawks in the Discover Central Division.

NHL.COM: Erik Karlsson is hoping the San Jose Sharks can avoid a roster rebuild and find a way to build with their current core group. “Obviously, I did not sign here to go through a rebuild or go through what I did for 10 years with Ottawa,” said Karlsson.

SPECTOR’S NOTE: Karlsson’s comments raised hackles among some Senators followers who pointed out the club reached the playoffs (including the 2017 Eastern Conference Final) in five of his nine seasons in Ottawa. During the same period, however, the club twice tore down its roster to rebuild with younger talent.

Karlson obviously wanted to play for a long-time contender and felt the Sharks were his best bet. Nevertheless, that might no longer be the case with their aging core of expensive veterans. He might not want to see the club rebuild but management could have little choice if they miss the playoffs this season.