The latest on the Bruins plus updates on Clayton Keller, Pavel Buchnevich and Troy Terry in today’s NHL rumor mill.

SHOULD THE BRUINS MAKE A MOVE NOW?

BOSTON HOCKEY NOW: Jimmy Murphy took note of colleague Joe Haggerty’s piece over the weekend calling upon Bruins general manager Don Sweeney to shake up the roster. “Not at the NHL Trade Deadline when prices will skyrocket but now.” 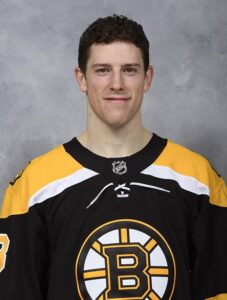 Murphy believes the transitional leadership group of Charlie Coyle, Chris Wagner and Sean Kuraly aren’t leading by example. He suggests Massachusetts natives Coyle and Wagner could find themselves playing away from home again but point out the former has a modified no-trade clause and a no-movement clause in his contract.

He suggests Sweeney look deeper into the Arizona Coyotes than defenseman Oliver Ekman-Larsson, as well as explore possibilities with the Ottawa Senators. In a separate piece (stick tap to Florida Hockey Now), Murphy noted Oliver Ekman-Larsson was close to becoming a Bruin last fall, adding Coyotes GM Bill Armstrong “is listening again on his captain.”

Murphy also cites a source claiming Senators center (and Boston native) Colin White was “out there” at the trade deadline two years ago. With younger players coming through the Senators pipeline, the source wonders if White could be available.

SPECTOR’S NOTE: Sweeney might be able to afford Ekman-Larsson’s annual average value of $8.25 million if he could move Coyle’s $5.25 million as part of the return. That’s assuming, of course, Ekman-Larsson is willing to waive his NMC during this season and if the Coyotes aren’t on Coyle’s 10-team no-trade list. I don’t think that’s going to happen.

Coyle’s low production and his annual cap hit through 2025-26 won’t attract many suitors unless Sweeney takes a comparable player and contract in return. That’s not going to improve the Bruins before this year’s playoffs.

As for White, the Senators could entertain offers but they might not be in a hurry to move him. He’s got four more years remaining on his deal. They can afford to wait until the offseason if they feel the need to move him out.

KELLER ON THE BLOCK?

FLORIDA HOCKEY NOW: Jimmy Murphy pondered the possibility of an Arizona Coyotes fire sale at the trade deadline or during the offseason. He wondered if they could consider shopping forward Clayton Keller. A source told Murphy he’d heard Keller’s name “more than you’d expect” before signing his current eight-year contract and is hearing it again, though he stressed GM Bill Armstrong isn’t shopping the 22-year-old forward. The source believes that sort of move would be more likely to happen in the offseason around the NHL Draft.

SPECTOR’S NOTE: Given the ongoing uncertainty surrounding the Coyotes we can’t rule out the possibility of Keller getting traded. However, it’s worth pointing out Coyotes Insider Craig Morgan doesn’t see Keller being that high on the trade board.

WHAT WILL THE RANGERS DO WITH BUCHNEVICH?

NEW YORK POST: Larry Brooks believes the Rangers have a big decision to reach with Pavel Buchnevich before the April 12 trade deadline. He wonders if the winger has played well enough to be taken off the trade market or if he’s priced himself off the roster going forward. Buchnevich turns 26 next month, is slated to become a restricted free agent with arbitration rights this summer and will be a year away from unrestricted free agent eligibility.

With 22 points in 26 games, Buchnevich has become one of the Rangers’ most reliable forwards this season. Moving him would create a hole on right wing that could take a couple of years to fill. If they’re going to trade him, Brooks feels they should get a young, no-doubt top-six center or a grinding-oriented winger comparable to Toronto’s Zach Hyman but doesn’t envision either scenario happening.

SPECTOR’S NOTE: Brooks believes it could cost $5.5 million annually to lock up Buchenevich long-term. The Rangers could entertain offers for Buchnevich at the trade deadline but they don’t have to move him by April 12. They still hold his rights through 2022 so they can address this issue in the offseason when teams have more cap space and willingness to make significant trades.

← NHL Morning Coffee Headlines - March 15, 2021 Blue Jackets, Ducks Could Soon Become NHL Sellers →
We use cookies on our website to give you the most relevant experience by remembering your preferences and repeat visits. By clicking “Accept”, you consent to the use of ALL the cookies.
Do not sell my personal information.
Cookie SettingsAccept
Manage consent