Check out the latest on the Leafs, Oilers, and Devils in today’s NHL rumor mill.

SHOULD THE LEAFS PURSUE BONINO?

SPORTSNET: In a recent mailbag segment, Luke Fox was asked if pursing a third-line center was a priority for Toronto Maple Leafs general manager Kyle Dubas. Fox believes acquiring a top-four, right-shot defenseman remains Dubas’ priority, but feels improving the depth at center should be next.

The reader proposed pursuing Nashville Predators center Nick Bonino. Fox believes he’d be a wonderful addition but doubts the Predators will part with him. He instead suggested some short-term UFA options like Joe Thornton, Derick Brassard, Nate Thompson, Brad Richardson, or Greg McKegg.

Cap Friendly indicates the Predators have over $72 million invested in 16 players for 2020-21. They could use some cap relief if they hope to re-sign UFAs like Mikael Granlund and Craig Smith, but Poile could consider other cost-cutting options (hello there, Kyle Turris).

The Leafs, meanwhile, have over $76.9 million tied up in 16 players. That’s not much room to pursue a top-four defenseman and a third-line center. They’ll have to shop one or two salaried players to address those needs. 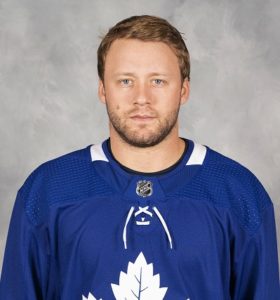 One reader proposed the Leafs swap Morgan Rielly and William Nylander to the Columbus Blue Jackets for Seth Jones and Josh Anderson. Fox loves the idea of such a blockbuster deal but noted how NHL teams love their talent too much to make such transactions. He also pointed out Jones and Rielly are massively popular in their respective markets.

EDMONTON JOURNAL: Jim Matheson reports the NHL deciding the regular season is over could mean the Oilers won’t have to part with their conditional 2020 third-round pick to the Calgary Flames. It was part of the deal that saw the Oilers ship winger Milan Lucic to Edmonton in exchange for winger James Neal.

Under the conditions of the trade, the Oilers’ pick would’ve belonged to the Flames if Neal scored 21 goals this season. He had 19 when the schedule was paused. Oilers GM Ken Holland said he hasn’t been officially told that’s the case.

SPECTOR’S NOTE: The Athletic’s Jonathan Willis said the league still hasn’t addressed how it will sort out this season’s conditional trades. He suggested three possible approaches. One, the season is interpreted as having ended at 71 games, meaning the Oilers keep their pick. Two, the league prorate results over 82 games, meaning Neal could be credited with 22 goals and the Flames get the pick. The third is a compromise in which the Flames get some lesser draft compensation from the Oilers.

THE ATHLETIC (subscription required): In a recent mailbag segment, Corey Masisak was asked about realistic blueline trade targets for the New Jersey Devils.

Masisak ruled out pursuing young defensemen on potentially cap-strapped teams like Tampa Bay’s Mikhail Sergachev and St. Louis’ Vince Dunn as he expects they’ll be re-signed by their respective clubs. Older, short-term options could be available, such as Chicago’s Olli Maatta or Arizona’s Niklas Hjalmarsson.

He also noted the Buffalo Sabres have too many blueliners, suggesting Colin Miller as a target. He also wondered if the Minnesota Wild might part with Jonas Brodin. Even some potential free agent bargains like Cody Ceci or Joel Edmundson might be worthwhile for the right term and price.

SPECTOR’S NOTE: Masisak believes the Devils’ priority could be adding a defenseman or two after trading away Sami Vatanen and Andy Greene in February. Who they target, however, depends upon who’s sitting in the GM’s chair following this season. Will interim GM Tom Fitzgerald remains on the job, or will they hire someone else?

← NHL Morning Coffee Headlines - May 28, 2020 Five NHL Teams That Could Benefit By The Proposed 24-Team Playoff Format →
We use cookies on our website to give you the most relevant experience by remembering your preferences and repeat visits. By clicking “Accept”, you consent to the use of ALL the cookies.
Do not sell my personal information.
Cookie SettingsAccept
Manage consent