TSN: The NHL’s bottom line could face a short-term blow from the COVID-19 pandemic. Last season, the league cracked $5 billion in revenue for the first time. Former Buffalo Sabres managing Larry Quinn speculates that could be cut in half in the short term. It’s already being felt among several clubs, with at least 10 having laid off or furloughed employees and executives taking pay cuts. 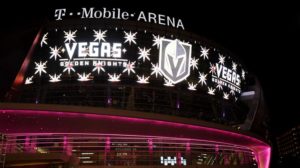 Could an influx of NHL players in Las Vegas increase coronavirus rates in the area?

The players, meanwhile, are bracing themselves for lost salaries with an ongoing deferral of their final paychecks for this season. Hockey analyst and former NHL GM Brian Burke reported one option being discussed is the further deferral of part of players’ wages until revenues bounce back.

Gate revenue will be affected as long as fans are prohibited by COVID-19 restrictions from attending games. The reduced value of the Canadian dollar will also take a toll on league revenue, as well as uncertainty over the league’s next U.S. television deal. That’s led to questions over what the salary cap will look like and the effect upon a new collective bargaining agreement.

SPECTOR’S NOTE: That’s why the league and the NHL Players Association is considering starting next season on Jan. 1, 2021, in hopes fans will be allowed back in arenas by then.

Various reports suggest both sides could maintain the salary-cap at $81.5 million for next season to ensure teams don’t have to significantly slash player payrolls. There’s also talk of a CBA extension implemented before the playoff tournament begins in August.

It will be interesting to see the effect of the pandemic beyond next season. The league wants a full 82-game schedule starting next January, but a second COVID-19 wave could force them to scrub part of it and reducing hockey-related revenue for 2021-22.

SPORTSNET: Iain MacIntyre weighed the pros and cons of Edmonton, Toronto, and Vancouver as one of the NHL’s two proposed host cities for its playoff tournament.

SPECTOR’S NOTE: The biggest sticking point is Canada’s mandatory 14-day quarantine period for anyone arriving from abroad. Prime Minister Justin Trudeau indicated his government is comfortable with one of those Canadian cities as an NHL hub provided local health officials are ok with it. So far, officials in those three cities have expressed support.

SPECTOR’S NOTE: The 12 NHL teams will be quarantined away from the general public in a bubble area encompassing the arena, training facilities, and hotels where they’ll be staying. The players will be tested daily and anyone testing positive will be quarantined.  A greater concern is whether rising COVID-19 numbers in the Las Vegas area poses a threat to the players.

ASSOCIATED PRESS: Equipment changes, such as full-face shields, haven’t been part of the ongoing return-to-play talks between the league and the PA. Both sides are focused on off-ice protection from the coronavirus.

THE ATHLETIC (subscription required): Pierre LeBrun was critical of the Sabres’ constant hirings and firings, especially among their management and coaching staff. League officials told LeBrun it takes around five years for a general manager’s program to take hold. Former Sabres GM Jason Botterill and his predecessor, Tim Murray, each had three years in the role.

THE HOCKEY NEWS: Ryan Kennedy believes Kevyn Adams, the Buffalo Sabres new general manager, will be scrambling to replenish his club’s scouting and development after those departments were gutted in a front-office purge earlier this week. Compounding the problem is finding suitable talent to fill those roles during a pandemic.

TSN’s Frank Seravalli posted the complete list of those who were fired by the Sabres. Their scouting department was hardest hit, slashed from 21 down to seven.

SPECTOR’S NOTE: Time will tell if the Sabres’ moves will pay off. If recent history is anything to go by, don’t expect much improvement. It doesn’t help that some observers are already writing off Adams as a yes-man for Sabres owners Terry and Kim Pegula.

In other Canadiens news, Hall-of-Famer Bob Gainey raised over $300K from the sale of his hockey memorabilia. A portion will be donated to the Canadiens Children’s Foundation.

BOSTON HERALD: Bruins blueliner John Moore has fully recovered from the shoulder surgery that limited him to 24 games this season.

LOS ANGELES TIMES: Calgary Flames assistant GM Chris Snow is showing remarkable resilience as he battles ALS. Given six to 18 months to live, an experimental drug has lengthened his horizon and maintained his quality of life.

SPECTOR’S NOTE: Best wishes to Snow in his ongoing fight with this dreadful disease.

DETROIT FREE PRESS: A report from Russia Today claimed Hall-of-Famer Pavel Datsyuk was said to be holed up with his family with a rogue priest at a Russian monastery. Keith Gave, author of “The Russian Five”, said he spoke with Datsyuk’s agent, who said the Datsyuk family is actually spending time at their cottage.