​The Canadian government clears the way for allowing hub cities, a CBA extension could be part of the return-to-play plan, plus updates on Seth Jones, Sean Couturier, and more in today’s NHL morning coffee headlines.

THE SCORE: Josh Gold-Smith cites a Canadian Press report indicating the Canadian government has issued an order-in-council that would allow Edmonton, Toronto, or Vancouver to serve as one of the NHL’s two hub cities for its 24-team playoff tournament later this summer. 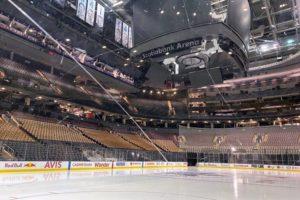 Toronto’s Scotiabank Arena could be among one of two host arenas for the NHL’s playoff tournament.

The order, which now awaits the Governor-General’s signature, would allow the NHL to work around Canada’s mandatory 14-day quarantine protocol for individuals entering the country. The league had to provide a plan that adhered to Canada’s public health requirements before the government went ahead with the order.

SPECTOR’S NOTE: Those three Canadian cities are among 10 in the running to host the tournament. Las Vegas is reportedly considered the front-runner, but it’s also believed the league prefers placing one of those hosts in Canada.

THE ATHLETIC (subscription required): Pierre LeBrun cites a source claiming the NHL and NHL Players Association are attempting to negotiate the layers for Phase 3 and 4 of the return-to-play plan while also trying to hammer out an extension to the collective bargaining agreement.

LeBrun’s source, who’s close to the negotiations, suggested the return-to-play plan and a CBA extension (or a memo of understanding for the latter) could be presented as one package to the players before the end of this month.

LeBrun also reports there are players with questions about such issues such as health concerns in their respective NHL cities, life under quarantine conditions during the tournament, and economic issues such as escrow payments.

Should the playoff tournament go off without a hitch, the Stanley Cup could be awarded in early October, with the draft and free agency beginning later in that month.

SPECTOR’S NOTE: A CBA extension (perhaps to 2026) would be a silver lining in the COVID cloud hanging over the NHL. Because of the effects of the pandemic upon hockey-related revenue, both sides must work together to ensure labor peace in the coming years. Given the limited timeline and the myriad of issues to be discussed, it remains to be seen if they can work out an agreement by the end of June.

TSN: Bob McKenzie reports if an NHL  player tests positive for COVID-19 we won’t know what team they belong to. Instead, the league could simply say a player has tested positive. McKenzie speculates it could be part of a weekly report going forward indicating how many players have or haven’t tested positive.

SPECTOR’S NOTE: That will raise questions over which teams those players belong to, how many of them could be sidelined, and the effect upon the proposed playoff tournament.

McKenzie thinks most of the players understand the need to return to action is an important one but there is a vocal minority raising concerns. He feels a player could be allowed to opt-out of returning if he had strong objections of doing so.

SPECTOR’S NOTE: McKenzie and Sportsnet’s Elliotte Friedman reported the league and the PA are believed to be working on opt-out language in the plan for players who don’t want to return. Friedman also said part of the pitch will be the quarantine bubble the teams will be under will be safer than in some parts of North America.

McKenzie also said a decision on the two host cities could come next week. The league’s preference is a home team doesn’t play in its own hub. In other words, if Las Vegas is selected, the Vegas Golden Knights could play in the other hub city.

ESPN.COM: Emily Kaplan reports the NHL has assured its coaches they won’t face any restrictions preventing them from doing their jobs. Those of a certain age or in an at-risk demographic won’t be prevented from being behind the bench. Health and safety protocols for coaches and their interactions with players are still being discussed.

SPECTOR’S NOTE: The coaches could be required to wear masks behind the bench and elsewhere in the facility. We’ll learn more details when the league and the PA release their health protocol plans for Phase 3 and 4.

TWINCITIES.COM: Minnesota Wild forward Luke Kunin knows he’s at a higher risk of contracting COVID-19 because he’s a type-1 diabetic. Nevertheless, he remains focused on joining his teammates for the playoff tournament. “I don’t think it’s going to stop me from suiting up,” said Kunin.

NBC SPORTS PHILADELPHIA: Sean Couturier and Ivan Provorov are among the Flyers that have taken part in small-group training at the team’s practice facility.

THE HOCKEY NEWS: Former NHL player Dan Carcillo is one of two former CHL players to file a class-action lawsuit alleging they were routinely hazed, bullied, physically and verbally harassed, and physically and sexually harassed and assaulted during their junior careers. This comes days after a former Kitchener Rangers player claimed he was forced to do cocaine in a team bathroom during his rookie season in 2016.

← NHL Playoffs Breakdown: Western Conference Round 1 Oilers vs. Blackhawks NHL Rumor Mill - June 19, 2020 →
We use cookies on our website to give you the most relevant experience by remembering your preferences and repeat visits. By clicking “Accept”, you consent to the use of ALL the cookies.
Do not sell my personal information.
Cookie SettingsAccept
Manage consent