​Vancouver is out as a possible hub city,  the latest CBA news, an update on the 2020 draft lottery, and much more in today’s NHL morning coffee headlines.

VANCOUVER SUN: The city of Vancouver is no longer in the running to become one of the two hub cities for Phase 4 of the NHL’s return-to-play plan. Reports indicate the league was looking for some sort of waiver from British Columbia’s positive-test protocols. One example cited was the province of Ontario, where someone who tests positive but is asymptomatic can still return to work. League officials have said one player testing positive shouldn’t be ground to prevent a team from playing on.

TSN: The league is now shifting its focus to hosting bids from Edmonton and Toronto. Alberta’s chief medical officer signed off on a health-and-safety plan for a host city presented by the Oilers Entertainment Group.

Pierre LeBrun reports Los Angeles and Chicago are on standby in case the NHL cannot put a hub city in Canada to go along with Las Vegas. He also said an announcement probably won’t happen until Monday or Tuesday so as not to conflict with tonight’s draft lottery.

SPECTOR’S NOTE: The league seems quite keen for a hub city in Canada. Edmonton looks like the front-runner now. It appears Las Vegas remains a lock as one of the hub cities despite the recent rise of COVID-19 in that city and the state of Nevada.

NEW YORK POST: Larry Brooks reports the full membership of the NHL Players’ Association will vote on a comprehensive return-to-play proposal. It would include a collective bargaining agreement extension plus the health protocols for training camp and the playoff tournament once negotiations between the league and the PA conclude. 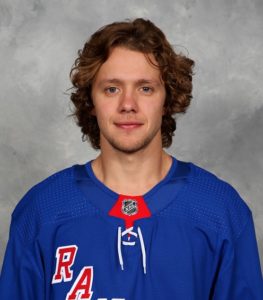 Rangers winger Artemi Panarin raised concern about escrow payments. He said the players cannot resume play until there is an agreement in place.

“For nearly two decades, the Players have protected the owners income with escrow, including throughout this pandemic crisis, in which owners equity has continued to grow exponentially,” wrote Panarin. “It is time to fix the escrow.”

Brooks cites sources indicating the proposal generated by the league and the PA would include a cap on escrow on a de-linked flat salary cap expected to be around $83 million for at least the next three seasons as both sides continue to deal with the economic issues caused by the pandemic.

He suggested that the cap number could change over time. The excess could roll over two or three years, but a hard cap on escrow would be gradually implemented throughout the extension. Brooks also said the players would be responsible to make up 14 percent of escrow for this season.

“It’s about time … the owners need to understand we’re done paying their debts,” Kesler said. “You run your team into the ground it’s on you …. if there’s a pandemic it’s on the owners … figure it out it’s not a free ride.”

SPORTSNET: Elliotte Friedman cites sources claiming the escrow cap would be at 20 percent for 2020-21. There would also be a one-season-only salary deferral of 10 percent by every player. It would not be a rollback as the players would get that money back in the future, meaning the escrow on that money would be lower.

Friedman also reports the cap could be kept close to $81.5 million for the next three seasons. It could increase by $1 million in 2022-23.

The pandemic struck close to home for Price, as the mother of one of his good friends died earlier this year after contracting COVID-19.

SPECTOR’S NOTE: The players will determine the fate of the return-to-play plan. The tournament and a possible extension to the CBA could be derailed if they reject the proposal. I don’t blame them for trying to leverage this to their favor, but it remains to be seen if the majority support that power play.

TSN: Bob McKenzie reports the 2020 NHL Draft Lottery will be held tonight at 8 pm ET at the NHL Network studios in New Jersey. For the first time, there won’t be representatives from the various clubs in the lottery because of COVID-19.

McKenzie took to Twitter indicating the league has a Plan B for what will happen to the draft lottery and order of selection if the return-to-play plan doesn’t go through. He doesn’t know what it could be but cited one NHL GM suggesting the league should resort to the rules of the 2005 draft in which all teams would be eligible for the first-overall pick.

NBC SPORTS: has a draft lottery primer, including the top prospects, the odds for the NHL teams, and a brief explanation of the potential two phases of the lottery.

THE SCORE: The NHL could play daily triple-headers if play resumes.

WINNIPEG FREE PRESS: As of Thursday not a single member of the Winnipeg Jets roster has returned to Winnipeg for Phase 2. They could be kept off the ice by Manitoba’s quarantine protocols for 14 days unless they receive an exemption. It would affect their efforts to resume skating in preparation for the start of training camp on July 10.

SUN-SENTINEL.COM: Florida Panthers captain Aleksander Barkov is now a major shareholder of Tappara Tempere, his hometown club in Finland. He also claims he and his Panthers teammates are looking forward to resuming the season

THE SCORE: Seattle’s KeyArena will be renamed Climate Pledge Arena after Amazon bought its naming rights.

← The NHL Draft Lottery Has Never Been This Complicated NHL Rumor Mill - June 26, 2020 →
We use cookies on our website to give you the most relevant experience by remembering your preferences and repeat visits. By clicking “Accept”, you consent to the use of ALL the cookies.
Do not sell my personal information.
Cookie SettingsAccept
Manage consent