​Updates on Jake DeBrusk and Carl Soderberg plus the latest on the Blackhawks free agents in today’s NHL rumor mill.

COULD DEBRUSK BECOME A TRADE CANDIDATE?

NBC SPORTS BOSTON: Joe Haggerty believes Jake DeBrusk is in line for a raise but it likely won’t come from the Bruins. The 23-year-old winger is a restricted free agent after this season. 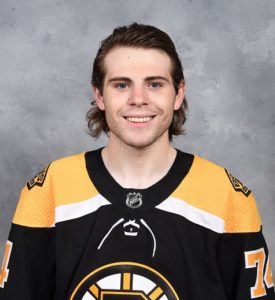 Could the Boston Bruins trade winger Jake DeBrusk in the off-season? (Photo via NHL Images)

Haggerty suggests DeBrusk could command between $4.5 million and $5.5 million annually on his next contract. The Bruins have over $63 million invested in next season’s payroll with DeBrusk, Torey Krug, Zdeno Chara, and several others to re-sign.

With the salary cap expected to remain at $81.5 million for next season, Haggerty speculated Bruins management might have to consider trading DeBrusk if it came down to a choice between the winger and Krug. He believes this would be the time to move him to get back close to the maximum value for a young, still-developing player.

SPECTOR’S NOTE: It’s too early to tell what Bruins general manager Don Sweeney will do once the off-season begins. Nevertheless, this situation could be worth monitoring.

Those cap constraints cannot be ignored. If they re-sign Krug for between $7-$8 million AAV and DeBrusk to $5 million, it won’t leave much wiggle room for the rest of the roster. Somebody else will have to go if they don’t move DeBrusk.

The Blackhawks’ notable free agents include goaltender Corey Crawford and forwards Dylan Strome, Dominik Kubalik, and Drake Caggiula. Pope speculates they could end up waiting four months longer than usual to find out their fates.

Crawford is an unrestricted free agent but hopes to re-sign with the Blackhawks. Strome, Kubalik, and Caggiula are restricted.

SPECTOR’S NOTE: Most NHL free agents are in the same boat. The league and NHLPA have an agreement to tentatively extend all expiring contracts to Oct. 31. They can be re-signed by their current clubs before then but most GMs will wait until they know for certain what next season’s salary cap will be.

COULD SODERBERG INTEREST THE OILERS?

THE ATHLETIC (subscription required): Jonathan Willis recently suggested Carl Soderberg could be a useful and affordable short-term free-agent addition for the Edmonton Oilers. The 34-year-old Arizona Coyotes center could fit comfortably among the Oilers’ middle-six forwards.

SPECTOR’S NOTE: The Oilers could use a more experienced and skilled third-line center, allowing them to drop Riley Sheahan to the fourth line. Soderberg’s at the age where he’s still an effective player but won’t get any expensive long-term offers. For the right price, he could be a decent fit with the Oilers for a year or two.

← NHL Morning Coffee Headlines - June 26, 2020 Notable Former NHL Stars Still Awaiting Induction Into Hockey Hall of Fame →
We use cookies on our website to give you the most relevant experience by remembering your preferences and repeat visits. By clicking “Accept”, you consent to the use of ALL the cookies.
Do not sell my personal information.
Cookie SettingsAccept
Manage consent