SPORTSNET: Maple Leafs players already in Toronto underwent COVID-19 testing yesterday in preparation for the second phase of the NHL’s Return-To-Play Plan on Monday. Teams will be allowed to reopen their training facilities (based on local and state/provincial medical protocols) to allow voluntary small-group training of up to six players per group. Those in the Toronto area include Mitch Marner, Zach Hyman, Jake Muzzin, and Kyle Clifford. 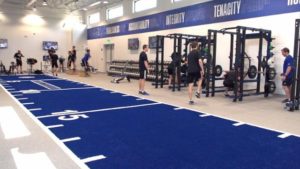 The Vancouver Canucks will be keeping Rogers Arena closed until there is a demand from the players for ice and training space. Alex Edler, Chris Tanev, and Troy Stecher are the only Canucks to spend the coronavirus shutdown in Vancouver, while Josh Leivo stayed for medical treatment.

MONTREAL GAZETTE: Canadiens players will have to wait until Thursday to begin skating at their practice facility as no ice has been laid there. The club claims it’s due to maintenance work at the facility, but a source said the ice crew had been laid off because of the pandemic. Another source indicated the ice would be ready for the players on Thursday. Paul Byron and Jonathan Drouin are the only Canadiens currently in Montreal.

WINNIPEG FREE PRESS: Nearly every member of the Jets are currently at their homes in Canada, the United States, and Europe. There isn’t expected to be much activity at the Jets training facility in the near future owing to travel restrictions and the mandatory 14-day self-quarantine upon returning to Winnipeg.

STLTODAY.COM: After consultation with his players, Blues general manager Doug Armstrong said his club won’t be opening their facilities until they request it. Approximately 10 of the Blues’ players remained in the St. Louis area since the NHL began its self-quarantine period on March 12.

TRIBLIVE.COM: All Penguins players and staff will be tested for COVID-19 before using the club’s training facilities. Medical evaluations for those who test negative will begin on Monday.

NEW YORK POST: The Islanders will be ready to open their facilities on Monday, while the Rangers will require an extra day before opening theirs. Chris Kreider, Marc Staal, Brendan Smith, Adam Fox, and Brendan Lemieux are the only Rangers currently in the local area.

SPECTOR’S NOTE: The Athletic’s Pierre LeBrun (subscription required) has a full listing of each team’s status and how many of their players could use those facilities when they open next week.

Most players have resided at their off-season residences since the league paused operations in mid-March. Because participation in Phase 2 is voluntary and given travel restrictions and local health protocols, most will likely remain where they are during this period. Those who reside in NHL cities other than their respective teams’ have permission to train at those facilities if they wish.

“Racism and injustice in our country must end,” Kane said. “As a white male in this society, I will never truly understand. But I want to help in this fight for change – and I know I cannot do that in silence.”

ESPN.COM: Greg Wyshynski reports Kim Davis, the NHL’s executive VP for social impact, growth initiatives, and legislative affairs, announced the league is forming four committees to examine and address the diversity issues facing the league and the sport. The committees are the continuation of the work announced at last December’s board of governors meeting after several players reported racist language and physical abuse from coaches during their playing careers.

SPECTOR’S NOTE: Okposo could be ready to participate in training camp, tentatively slated to open sometime in July.

THE ATHLETIC (subscription required): Eric Duhatschek reports the Hockey Hall of Fame’s annual selection committee will be held as planned on June 23 and 24. This year’s prominent first-year eligible players are Jarome Iginla and Marian Hossa.

OTTAWA SUN: A debate over distribution of funds was among the main issues that led the Ottawa Senators Foundation to announce it was cutting ties with the club on July 3. The foundation’s focus is on supporting youth programs. Senators owner Eugene Melnyk, who underwent a successful liver transplant in 2015, wanted a portion of the proceeds to go toward organ donation awareness.

SPECTOR’S NOTE: They are among some of hockey’s best pundits. Here’s hoping for better days ahead for all of them.

← Which of The Seven NHL Non-Playoff Clubs Will Make a Splash in The UFA Pool? NHL Rumor Mill - June 6, 2020 →
We use cookies on our website to give you the most relevant experience by remembering your preferences and repeat visits. By clicking “Accept”, you consent to the use of ALL the cookies.
Do not sell my personal information.
Cookie SettingsAccept
Manage consent