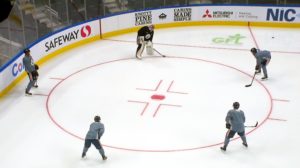 A handful of Oilers take part in small-group training on Monday (Photo via Edmonton Oilers).

The Pittsburgh Penguins and Tampa Bay Lightning are expected to have players on the ice today, while the Arizona Coyotes will open their training facilities on Thursday.

TSN: 16 teams are hoping to open their facilities this week for small-group training. The Montreal Canadiens are expected to open their doors on Thursday. The Vancouver Canucks, however, have no plans to reopen their facility for the foreseeable future. With only three Canucks in Vancouver with their own access to ice, it’s easier for them to continue working out on their own.

THE DENVER POST: The Avalanche won’t open their facilities until Wednesday or Thursday.

WINNIPEG FREE PRESS: Bell MTS Place will remain closed for the time being as almost all of the Jets are currently at their off-season homes throughout North America and Europe.

SPORTSNET: The Calgary Flames and Columbus Blue Jackets are among the clubs expected to open later this week. The Carolina Hurricanes, Minnesota Wild, and St. Louis Blues are among those that will wait.

SPECTOR’S NOTE: Because the small-group training is voluntary, the teams aren’t obligated to reopen their training facilities unless requested by the players. With many players at their off-season homes and the ongoing travel restrictions from the COVID-19 pandemic, their preference is to continue working out at their current locations.

The alliance will be an independent group seeking to eliminate racism and intolerance in hockey. It hopes to work closely with the NHL to bring about change.

SPECTOR’S NOTE: Over the weekend, the Toronto Sun’s Steve Simmons reported it appeared those three cities were out as potential hubs. He claimed Las Vegas is almost certainly to be named as one of the host cities, with Los Angeles or Chicago as the other.

Pierre LeBrun reports the league and the NHL Players’ Association are hoping to open training camps in mid-July as part of Phase 3.

Washington Capitals goaltender Braden Holtby and his wife Brandi have launched an auction to benefit Black Lives Matter DC and The Leadership Conference on Civil and Human Rights.

THE SCORE: Buffalo Sabres’ goaltender Carter Hutton revealed an ongoing vision issue plagued him during 2019-20. However, he doesn’t blame it for his poor performance at times.

AZCENTRAL.COM: Kent Somers reports Coyotes owner Alex Meruelo hinted he could have a new arena deal in place by the end of this year. Somers, however, remains skeptical.

If Meruelo has received a couple of “extremely attractive” offers from the East Valley, why hasn’t he taken them? What’s he waiting for? And what city or tribe is in position to make such an offer? Much less in the most difficult year (we hope) that most of us will experience?

NORTHJERSEY.COM: Josh Harris and David Blitzer, owners of the New Jersey Devils and the NBA’s Philadelphia 76ers, may be interested in purchasing MLB’s New York Mets.