Can the Canucks find sufficient cap room to re-sign their key free agents? Could the Canadiens sign Blues defenseman Vince Dunn to an offer sheet? Check out the latest in today’s NHL rumor mill.

VANCOUVER SUN: Patrick Johnson reports the Canucks could face a mean salary-cap crunch next season. Bonuses paid to young stars Elias Pettersson and Quinn Hughes means their cap hits will increase by $1.7 million. With the cap expected to remain at $81.5 million next season, it leaves the Canucks with just over $15 million in cap space. 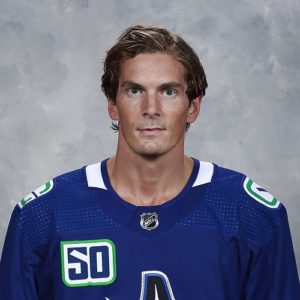 Could the Canucks and Loui Eriksson agree to a contract termination? (Photo via NHL Images)

With 16 players on one-way contracts, they must sign at least six players to fill out their roster for 2020-21. Notable free agents include Jacob Markstrom, Tyler Toffoli, Chris Tanev, and Jake Virtanen. Johnston suggested they could get some wiggle room by demoting Loui Eriksson and Sven Baertschi.

Ben Kuzma considers re-signing Markstrom and Toffoli as priorities. Keeping Tanev could require moving a depth player. His intangibles are hard to measure in salary comparable.

SPORTSNET: In a recent mailbag segment, Iain MacIntyre was asked if the Canucks and Eriksson would agree to a contract termination after he receives his $3 million signing bonus on July 1.

The 34-year-old winger has two years remaining on his deal with an annual average value of $6 million, though the actual value of the remaining years totals $5 million. MacIntyre believes there might be a conversation, but doesn’t think Eriksson will walk away from it.

SPECTOR’S NOTE: It could cost the Canucks $6 million annually on a five-year deal to re-sign Markstrom. Toffoli’s had a short window of work with the Canucks since joining them in February but he was a good fit during those few games before the schedule was interrupted by COVID-19. Years of wear-and-tear have taken a toll on Tanev’s game, but the Canucks could retain him on a short-term deal for the right price.

The Canucks won’t be the only cap-strapped club following this season. There are 13 teams with $70-plus million invested in their 2020-21 payrolls. That could affect efforts by Canucks general manager Jim Benning to swing some cost-cutting deals.

Then again, the effect of the pandemic upon NHL revenue could work in Benning’s favor. Some of his free agents could accept one- or two-year deals in hope of getting better terms down the road.

Benning could try to move Eriksson via trade, but if that difficult to do under a rising cap, it could be impossible under a flat one. If the winger proves unwilling to agree to contract termination, he could be waived and demoted.

COULD THE CANADIENS OFFER-SHEET DUNN?

THE ATHLETIC (subscription required): In a recent mailbag segment, Arpon Basu was asked if he thought the Montreal Canadiens should attempt to sign Vince Dunn to an offer sheet. The St. Louis Blues defenseman is a restricted free agent at season’s end.

Basu believes the Blues’ limited salary-cap space could make Dunn a tempting offer-sheet target. They would have difficulty attempting to match it if it was rich enough. An offer worth $4.2 million annually would only cost a second-round pick in compensation. While the Blues believe Dunn could help them a great deal, Basu doesn’t think they’re ready to pay him that much since he’s not yet arbitration-eligible.

SPECTOR’S NOTE: With over $79 million invested in 20 players and Dunn and Alex Pietrangelo to be re-signed, the Blues are seriously squeezed for cap space. Even if Pietrangelo departs via free agency at season’s end, they’d have a difficult time match a significant offer sheet for Dunn.

Just because a player could sign an offer sheet doesn’t mean he will. Most RFAs prefer re-signing with their current teams. Still, it’ll be interesting to see if the Canadiens or someone else attempts that option with Dunn.

← NHL Morning Coffee Headlines - July 4, 2020 The Best And Worst Luck In NHL Draft Lottery History →
We use cookies on our website to give you the most relevant experience by remembering your preferences and repeat visits. By clicking “Accept”, you consent to the use of ALL the cookies.
Do not sell my personal information.
Cookie SettingsAccept
Manage consent