​Find out how a flat salary cap could affect the Chicago Blackhawks and New York Rangers in today’s NHL rumor mill.

CHICAGO SUN-TIMES: Ben Pope reports Brent Seabrook’s contract creates a salary-cap headache for the Blackhawks. The 35-year-old defenseman has four years remaining on his contract with an annual average value of $6.875 million. 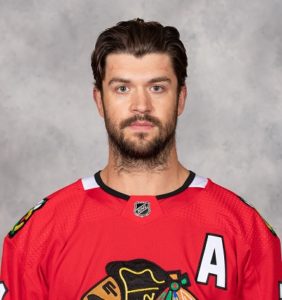 Brent Seabrook’s contract could create some salary-cap difficulties for the Chicago Blackhawks (Photo via NHL Images).

With the salary cap remaining at $81.5 million, Seabrook’s AAV will make it difficult for the Blackhawks to re-sign some key players. It will also affect efforts to improve their roster.

Seabrook has a full no-movement clause until 2022. It also means he must automatically be protected in next year’s expansion draft unless he agrees to waive it.

A huge portion of his salary is tied up in signing bonuses, rendering any buyout pointless. There won’t be any compliance buyouts under the proposed CBA extension.

Despite his recent surgeries, they won’t be putting him on long-term injury reserve as he appears on track to return to action.

SPECTOR’S NOTE: Cap Friendly indicates the Blackhawks have over $74 million tied up in 16 players for next season, with Corey Crawford, Dominik Kubalik, Dylan Strome, and Drake Caggiula to re-sign.

Seabrook was the topic of trade speculation in 2018-19 but his contract was considered unmoveable even then. If he agreed to waive his clause, the flat cap makes it unlikely the Hawks will find any takers now.

Blackhawks winger Brandon Saad was frequently mentioned in this season’s trade rumors. Don’t be surprised if his name resurfaces as a cost-cutting trade candidate.

THE JOURNAL NEWS: Vincent Z. Mercogliano recently examined the effects of a flat cap for next season upon the New York Rangers. He believes it’ll leave them with around $13.5 million in cap space.

Re-signing Ryan Strome and Tony DeAngelo are the priorities. Mercogliano speculates each could cost $5 million annually but it behooves the Rangers to get that down to $4 million each or risk losing winger Jesper Fast to unrestricted free agency unless he’s willing to return for a minor raise over his current $1.85 million. RFA winger Brendan Lemieux must also be re-signed.

If Fast departs, Mercogliano suggests re-signing RFA Phil Di Giuseppe, adding an affordable player via the UFA market as a replacement, or perhaps letting a young forward like Lias Andersson to step into that role.

SPECTOR’S NOTE: Lots of options to choose from here. Most of the Rangers speculation suggests Lundqvist could be bought out, but that’s not a certainty. There has been some media trade chatter about DeAngelo, Georgiev, and Andersson.

Something’s got to give in the off-season and it’ll be interesting to see what general manager Jeff Gorton has in store. One of those players noted above probably won’t be a Rangers when next season begins.

← NHL Morning Coffee Headlines - July 7, 2020 NHL Morning Coffee Headlines - July 8, 2020 →
We use cookies on our website to give you the most relevant experience by remembering your preferences and repeat visits. By clicking “Accept”, you consent to the use of ALL the cookies.
Do not sell my personal information.
Cookie SettingsAccept
Manage consent