​The Blue Jackets eliminate the Leafs from the qualifying round, Blues and Bruins fall to No. 4 seeds in their conferences, the second phase of draft lottery goes tonight, and more in today’s NHL morning coffee headlines.

NHL.COM: The Columbus Blue Jackets advanced to the 2020 Stanley Cup Playoffs by blanking the Toronto Maple Leafs 3-0 in the fifth and deciding game of their qualifying-round series. Jackets goaltender Joonas Korpisalo turned in a 33-save shutout while Zach Werenski, Liam Foudy, and Nick Foligno were the goal scorers. The Jackets face the Tampa Bay Lightning in a rematch of their 2019 opening-round series. Leafs defenseman Tyson Barrie left the game with an undisclosed injury in the second period. 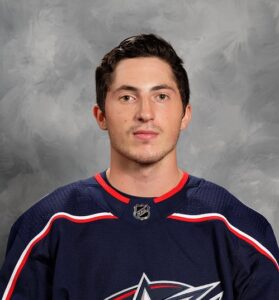 Columbus Blue Jackets defenseman Zach Werenski scored the winning goal in a 3-0 victory over the Toronto Maple Leafs in Game 5 of their qualifying-round series (NHL Images).

SPECTOR’S NOTE: A solid effort by the Jackets in withstanding the Leafs’ offense and avoiding a repeat of their Game 4 collapse. Foudy’s goal was the dagger as the Leafs visibly sagged after that.

Another disappointing end to another season sparked plenty of fan and pundit criticism of the Leafs management over how the roster was constructed. I’ll have more later this morning in the Rumor Mill. As for Barrie, that game was likely his last as a Leaf. He’s an unrestricted free agent and not expected to return.

Braden Holtby kicked out 30 shots as the Washington Capitals held off the Boston Bruins 2-1 in round-robin play. T.J. Oshie and Tom Wilson scored for the Caps while Jake DeBrusk replied for the Bruins. The Capitals earn the third seed in the Eastern Conference while the Bruins slipped to fourth.

SPECTOR’S NOTE: The Bruins were winless in their three round-robin games. One reason is the “Perfection Line” (Patrice Bergeron, David Pastrnak, and Brad Marchand) was anything but, collecting just one assist between them. The Bruins need more from their top line as they face off against the hungry young Carolina Hurricanes in the opening round.

The defending Stanley Cup champion St. Louis Blues dropped into the fourth seed in the Western Conference following a 2-1 shootout loss to the Dallas Stars in round-robin play. The Stars picked up the third seed following Denis Gurianov’s game-winning goal after Joe Pavelski tied it late in the third period.

SPECTOR’S NOTE: It’s interesting that last year’s Cup finalists didn’t play that well during round-robin play, looking nothing like their dominant selves during the regular season. Maybe beging guaranteed playoff berths had something to do with it. Perhaps they couldn’t get motivated for the round-robin after going through a four-round slog last spring. Maybe they need a little more time getting up to speed following a long layoff. Whatever the reason, they’d better rediscover their winning ways soon or their hopes for another shot at the Cup will be quickly dashed.

The opening-round match-ups and schedules were released last night. The first games begin Tuesday, Aug. 11. Each series is now a best-of-seven format:

Phase 2 of the NHL Draft Lottery goes tonight at 6 pm ET to determine which of the eight clubs eliminated from the qualifying round will win the first-overall pick. Each team as a 12.5 percent chance of winning the pick.

SPECTOR’S NOTE: Expect howls of outrage from some observers if the Edmonton Oilers, Pittsburgh Penguins, or Toronto Maple Leafs win that pick. I, on the other hand, will delight in the chaos and the possibilities that could arise if one of those teams wins the pick. Will they shop it to address their roster weaknesses, or keep it and instead trade away a current star? That will stir the rumor mill for weeks leading up to the draft in October.

LAS VEGAS REVIEW-JOURNAL: Winger Max Pacioretty has joined his teammates in Edmonton for Game 1 of their opening-round series against the Chicago Blackhawks. Pacioretty had remained in Las Vegas during the round-robin to treat a minor injury suffered during training camp.

New York Islanders defenseman Johnny Boychuk (undisclosed) returned to practice yesterday and could be ready for Game 1 against the Capitals. He’d been sidelined since suffering an apparent head injury in Game 1 of the qualifier series against the Florida Panthers.

TWINCITIES.COM: Minnesota Wild captain Mikko Koivu, 37, is uncertain if this season was his last with the Wild and in the NHL. He’s an unrestricted free agent but intends to weigh his options, including talking with Wild management to see if they’re interested in bringing him back next season.

← Sunday NHL Rumor Roundup - August 9, 2020 NHL Rumor Mill - August 10, 2020 →
We use cookies on our website to give you the most relevant experience by remembering your preferences and repeat visits. By clicking “Accept”, you consent to the use of ALL the cookies.
Do not sell my personal information.
Cookie SettingsAccept
Manage consent