​Has Tuukka Rask played his final game with the Bruins? Could the Rangers be tempted to trade the first-overall pick? What’s the latest on the Panthers? Find out in the Sunday NHL rumor roundup.

COULD THE BRUINS AND RASK PART WAYS?

THE BOSTON GLOBE: Kevin Paul Dupont suggests it might be time for the Bruins and goaltender Tuukka Rask to part ways. This comes in the wake of Rask’s decision to return home for family reasons. While the club is supportive of the goalie’s decision, and Dupont is also sympathetic, the pundit points out this isn’t the first time he’s taken a leave of absence for family reasons.

Rask has one season left on his contract, but Dupont feels the Bruins cannot have uncertainty between the pipes, especially in the starter’s position. He notes the Bruins can trade the netminder to one of the 15 teams on the list he was obligated to provide in February. He believes Bruins general manager Don Sweeney “will be working the phones.”

SPECTOR’S NOTE: Every statement coming from the Bruins’ organization supports Rask’s decision and I feel they’ve handled this situation well considering the circumstances His critics will condemn him for bailing on the team. We don’t know the full story but it appears to be something he carefully considered for some time.

I don’t fault Rask for putting his family first. The same goes for anyone else regardless of profession. It’s difficult to focus on a job when you’re worried about your family.

Rask’s decision, however, does raise questions over the goaltender’s future in Boston. Some will suggest a trade, others retirement.

Dupont feels the Bruins GM and coach need to know who they can count on during the good times, bad times, and especially during the playoffs. If that’s the rationale the Bruins use to trade Rask (and that’s a big “if” at this point), it will hurt his value in the trade market. If Rask returns next season, they could keep their goalie tandem intact with Jaroslav Halak for one more season. 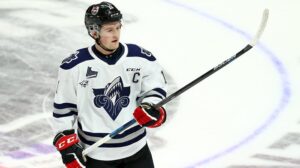 Will the New York Rangers use the first-overall pick to select Alexis Lafreniere? (NHL.com)

COULD THE RANGERS SHOP THE FIRST-OVERALL PICK?

Wyshynski points out the Rangers could land a proven center and help on defense by shopping the first-overall pick. A bidding war could get started among clubs seeking a skilled left-winger. However, just because it’s an option doesn’t make it the best one.

THE ATHLETIC (subscription required): Lisa Dillman cites former NHL GM Brian Burke suggesting the Rangers have got to listen if someone is going to come after that pick hard, but he notes those offers usually aren’t good.

Dillman wondered if the Los Angeles Kings, who own the second-overall pick, might contact the Rangers. The presence of No. 2 prospect Quinton Byfield (a center) might entice the Rangers to listen. While the Kings have depth in center prospects and the Blueshirts have a need at that position, it doesn’t mean there’s a fit there.

SPECTOR’S NOTE: I’ll be surprised if the Rangers don’t get some calls about that pick. Maybe from the Kings, perhaps from the Ottawa Senators, possibly from the Montreal Canadiens or another club in dire need of a potential scoring star. However, it’ll take a significant offer to convince them to part with that pick. Ultimately, I expect the Rangers will keep the pick, select Lafreniere, and find other ways to boost their depth at center, either internally or through the trade or free-agent markets.

FLORIDA HOCKEY NOW: George Richards noted whoever becomes the Florida Panthers new GM will have decisions to make regarding unrestricted free agents such as Evgenii Dadonov and Mike Hoffman.

Richards suggests the flat salary cap could work to the Panthers’ advantage if they want to re-sign a couple of their UFAs without breaking the bank. Dadonov and Hoffman seem to enjoy living in Florida and playing for the Panthers, but they might have to accept short-term deals if they hope to stay. However, their production could make them cost-prohibitive if the Panthers decide to cut payroll.

Improving the defense should be the Panthers’ priority. Richards notes blueliner Mike Matheson has six years left on his contract at $4.8 million per season and was scratched from the final two games of the postseason. If they’re willing to give up on Matheson’s potential it might not be easy to move his contract.

SPECTOR’S NOTE: The lack of a state tax also works in the Panthers’ favor if they hope to re-sign Dadonov and Hoffman. It’ll be interesting to see what transpires with those two as they approach free agency. They could test the market and then return to the Panthers if there’s nothing to their liking. That’ll depend, of course, on who takes over the GM’s chair between now and then.

Matheson frequently surfaced in this year’s rumor mill. The Panthers could be stuck with him as the decline of his play over the last couple of seasons could hurt his value in the trade market. Still, I can see the next GM calling around to see if there’s a club willing to take a chance on him.

← NHL Morning Coffee Headlines - August 16, 2020 NHL Playoffs: It's Now a Best-of-Five for Flyers and Canadiens →
We use cookies on our website to give you the most relevant experience by remembering your preferences and repeat visits. By clicking “Accept”, you consent to the use of ALL the cookies.
Do not sell my personal information.
Cookie SettingsAccept
Manage consent