The latest on Alex Pietrangelo and Taylor Hall plus updates on the Lightning, Leafs, Blackhawks, Avalanche and Canucks in the Sunday NHL rumor roundup.

LATEST ON PIETRANGELO AND HALL 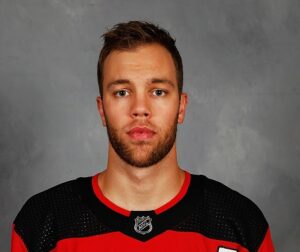 Taylor Hall is still considering his options in the free-agent market (NHL Images).

Darren Dreger reports winger Taylor Hall and his agent spent yesterday paring down their list of potential destinations. Hall is considering roster fit, team quality and the variety of offers.

SPECTOR’S NOTE: It sounds like Hall has more suitors than Pietrangelo. That’s likely due to the winger’s reported willingness to accept a one- or two-year deal.

It certainly seems like Pietrangelo could be Vegas-bound. They’ll have to clear considerable cap space to sign him to what could be between $8 million and $9 million annually on a long-term deal. Both players are taking their time and it could be another couple of days before they make their decisions.

UPDATE ON THE LIGHTNING

TSN: Pierre LeBrun believes Tampa Bay Lightning general manager Julien BriseBois will have to attach an asset to Tyler Johnson if he hopes to move the winger’s contract. The constraints in moving money under a flattened cap make it difficult to swing a deal.

Lebrun feels they must cut $10 million from their payroll to re-sign restricted free agents Anthony Cirelli, Mikhail Sergachev and Erik Cernak. Johnson has a full no-trade clause but has submitted a list of 7-8 preferred trade destinations.

Frank Seravalli also reports the Lightning are trying to move defenseman Braydon Coburn. He has a year remaining on his contract worth $1.7 million but also has a no-trade clause.

SPECTOR’S NOTE: BriseBois could have little choice but to include a decent asset in a package with Johnson if he hopes to move him. Otherwise, Cirelli or Sergachev could become offer-sheet targets. Coburn carries an affordable cap hit for next season but the 35-year-old blueliner is also coming to the end of his career. A sweetener might also have to be included to move him.

WHAT NEXT FOR THE LEAFS?

TORONTO SUN: Steve Simmons reports the Maple Leafs have no money to spend on free agents unless they shed contracts. They still need a third-line center as Simmons doesn’t believe Alex Kerfoot can fill that role.

SPECTOR’S NOTE: Cap Friendly shows the Leafs with $1.3 million in cap space with Travis Dermott and Ilya Mikheyev to re-sign. Unless they trade Kerfoot for a third-line center or find another way to free up cap room, they’ll have to stick with him in that role next season.

MORE MOVES TO COME FOR BLACKHAWKS?

CHICAGO SUN-TIMES: In the wake of the Blackhawks trading Brandon Saad last night to the Colorado Avalanche for Nikita Zadorov, Ben Pope believes more moves are coming. He speculates Calvin de Haan, Connor Murphy or others could be traded to clear up their logjam on the blueline.

COULD THE AVALANCHE PURSUE A DEFENSEMAN?

THE ATHLETIC: Following the Avalanche’s acquisition of Saad yesterday, Ryan S. Clark speculates their next move could be adding a top-four defenseman. That blueliner would have to agree to a one-year deal with a starting price of $4 million. Otherwise, they could turn to a prospect like Bowen Byram or Connor Timmins to replace the departed Zadorov.

SPECTOR’S NOTE: Not many UFA options available who could be had for that price. Maybe Sami Vatanen or Travis Hamonic.

SPECTOR’S NOTE: It’s believed the Panthers are shopping Weegar. Savard might not be available now that the Jackets added two centers in Max Domi and Mikko Koivu and have over $13 million in cap space to re-sign center Pierre-Luc Dubois. I don’t see the Devils trading Severson unless they’re planning to acquire an upgrade for the right side of their second defense pairing.

← NHL Morning Coffee Headlines - October 11, 2020 Taylor Hall Signs With The Sabres →
We use cookies on our website to give you the most relevant experience by remembering your preferences and repeat visits. By clicking “Accept”, you consent to the use of ALL the cookies.
Do not sell my personal information.
Cookie SettingsAccept
Manage consent