SPORTSNET: In a recent mailbag segment, Luke Fox was asked what might happen if the Toronto Maple Leafs miss the playoffs or are eliminated in the opening round. He believes team president Brendan Shanahan, general manager Kyle Dubas and head coach Sheldon Keefe should be granted one more shot in 2021-22. However, it could spell the end of the “Core Four” of Auston Matthews, John Tavares, Mitch Marner and William Nylander. 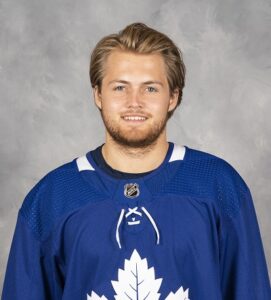 SPECTOR’S NOTE: Fox noted Dubas has resisted breaking up that core, pointing out the moves made during this offseason doesn’t project a sense of hot-seat panic. Nevertheless, a shakeup could be in store if the Leafs make another early playoff exit or miss the postseason entirely.

Matthews, Tavares and Marner each earn over $10.8 million annually. Tavares has a full no-movement clause. It could be difficult moving one of them under a flattened cap for 2021-22, Nylander could be the more likely trade chip. His annual average value ($6.96 million) is more affordable and he lacks no-trade protection.

Fox believes the Leafs are done for the offseason. He doesn’t rule out professional tryout offers (PTO), noting Dubas said he’s open to anything. However, the club’s lack of cap space makes it unlikely they’ll sign another UFA or go the PTO route.

SPECTOR’S NOTE: The Leafs are above the $81.5 million cap by just over $1 million according to Cap Friendly. They have no room for other additions unless Dubas acquires a player on permanent long-term injury reserve for additional salary-cap wiggle room or makes a cost-cutting trade.

NBC SPORTS: James O’Brien believes Dougie Hamilton’s next contract is among several big decisions facing the Carolina Hurricanes in 2021. GM Don Waddell is interested in negotiating a new deal with him before the start of the season.

O’Brien speculates Hamilton will want security after being traded twice. While the 27-year-old rearguard could find next year’s UFA market challenging, O’Brien notes high-end defensemen like Alex Pietrangelo and Torey Krug received lucrative deals this year. Even lesser blueliners like Chris Tanev, Dylan DeMelo and Joel Edmundson were among those receiving significant terms.

SPECTOR’S NOTE: It’s understandable that Waddell would be interested in signing Hamilton before this season opens. The puck-moving blueliner is in the final season of a six-year deal with an AAV of $5.75 million. Hamilton was in the running for the Norris Trophy last season until sidelined by a broken leg. Another Norris-worthy performance in 2020-21 could push his asking price to between $8 – $9 million annually.

The Hurricanes have over $52 million invested in 12 players for 2020-21. Big raises for Hamilton and Svechnikov could use up a combined $15 million. Given the uncertainty over next season and another flattened salary cap, the Hurricanes might not spend to the ceiling for 2021-22. The longer Hamilton goes unsigned, the more his name will surface in the rumor mill during 2020-21.

← NHL Morning Coffee Headlines - November 17, 2020 Top Three NHL Prospects For Each Central Division Team →
We use cookies on our website to give you the most relevant experience by remembering your preferences and repeat visits. By clicking “Accept”, you consent to the use of ALL the cookies.
Do not sell my personal information.
Cookie SettingsAccept
Manage consent