​Questions about Vladimir Tarasenko’s future with the St. Louis Blues and possible moves by the New Jersey Devils in today’s NHL rumor mill.

STLTODAY.COM: In his weekly live chat with Blues fans, Jim Thomas was asked if the St. Louis Blues might expose high-salaried veterans like Vladimir Tarasenko and David Perron in next year’s expansion draft or risk losing younger, cheaper players. Thomas doesn’t see that happening. He pointed out Perron is playing better in terms of production than he ever has, plus they’d hate to make the wrong decision with Tarasenko and see him regain his form with the Kraken. 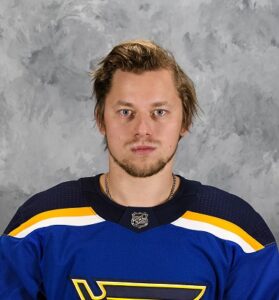 THE ATHLETIC: In a recent mailbag segment, Jeremy Rutherford was asked if the Blues might try to trade the injury-prone Tarasenko. Given the winger’s three shoulder surgeries, Rutherford doubted the Blues would get a good return. He felt there’s a better chance of Tarasenko helping the club upon his return from his latest surgery than a team offering a player or players who can contribute.

Rutherford was also asked if the Blues might make any more moves. While general manager Doug Armstrong hasn’t ruled out another signing, Rutherford would be surprised if it happened.

SPECTOR’S NOTE: Tarasenko’s recent shoulder injuries seem to have some Blues fans concerned about his performance over the remaining three years of his contract. Cap Friendly indicates signed through 2022-23 with an annual average value of $7.5 million, which could prove costly for the Blues if he cannot regain his 30-goal form.

Trading Taranseko won’t be easy if the Blues decide one day to part with him. In addition to his injury history and annual cap hit, the 28-year-old winger also has a full no-trade clause. That wouldn’t prevent him from being exposed in next year’s expansion draft but I’ll be shocked if Armstrong left him unprotected.

THE ATHLETIC: In a recent mailbag segment, Corey Masisak was asked if the New Jersey Devils might attempt to acquire players from cap-strapped clubs, or pursue free agent Mike Hoffman on a one-year contract, or if they’d go the offer-sheet route.

Masisak noted the Devils have over $17 million in salary-cap space, though new contracts for restricted free agents Mackenzie Blackwood and Jesper Bratt could whittle that down to around $10 million. He feels Tampa Bay Lightning winger Alex Killorn could be a good fit but isn’t sure if Devils GM Tom Fitzgerald will want to tie up too much future cap space given the current economic uncertainty.

Signing a UFA like Hoffman, Mikael Granlund or Anthony Duclair to a short-term deal is possible. However, those players could be reluctant to join a team that isn’t a clear contender and risk getting moved at the trade deadline.

SPECTOR’S NOTE: Fitzgerald could make a move to further boost his roster before the season begins (next month?). I don’t expect a blockbuster move but perhaps he can get into the bidding for one of those UFA forwards on a cost-effective deal. Those players could be reluctant to join a non-contender on a short-term deal. With so few teams carrying sufficient cap space, however, they might not have much choice if Fitzgerald shows interest in one of them.

← NHL Morning Coffee Headlines - December 5, 2020 NHL Morning Coffee Headlines - December 6, 2020 →
We use cookies on our website to give you the most relevant experience by remembering your preferences and repeat visits. By clicking “Accept”, you consent to the use of ALL the cookies.
Do not sell my personal information.
Cookie SettingsAccept
Manage consent