​Check out the latest on the Hurricanes, Predators, and Blues in the Sunday NHL rumor roundup.

NBC SPORTS: James O’Brien recently observed the Carolina Hurricanes opted to stand pat with goaltenders Petr Mrazek and James Reimer rather than pursue an upgrade between the pipes. Nevertheless, he wondered if they could pursue an experienced starter at this season’s trade deadline. O’Brien proposed perhaps moving one of them in exchange for a goalie with an expiring contract like Arizona’s Antti Raanta, Boston’s Tuukka Rask, or Vega’s Marc-Andre Fleury. 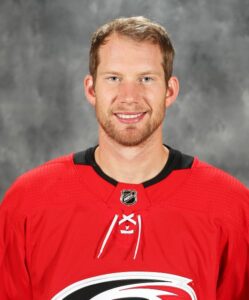 Could the Carolina Hurricanes attempt to replace a goalie like James Reimer during the coming season? (NHL Images)

THE ATHLETIC: In a recent mailbag segment, Sara Civian was also asked about the possibility of the Hurricanes swinging an in-season trade to improve their goaltending. She wondered if Fleury could become available if it’s determined Robin Lehner is completely healthy. Civian also advocated pursuing Arizona Coyotes netminder Darcy Kuemper.

SPECTOR’S NOTE: Most observers (including myself) believe the Hurricanes need to upgrade their goaltending to become Stanley Cup contenders. Mrazek and Reimer are unrestricted free agents at the end of this season. One or both could hit next summer’s open market.

Hurricanes general manager Don Waddell decided to stick with the Mrazek-Reimer tandem. Perhaps there simply wasn’t anything to his liking in the offseason trade and free-agent markets to address that need at a reasonable price. Waddell could keep his options open if his club needs help between the pipes before the trade deadline.

THE ATHLETIC: Adam Vingan suggests the Nashville Predators should target Anthony Cirelli with an offer sheet. The 23-year-old Tampa Bay Lightning center is a restricted free agent and his club has to clear salary-cap space to sign him to a new contract. Cirelli has the making of a future Selke Trophy candidate with his two-way skills.

Vingan believes the Predators have the necessary ammunition to make a serious offer for Cirelli. They have nearly $13 million in salary-cap space and sufficient draft picks required as compensation for a successful signing.

SPECTOR’S NOTE: Just because the Predators have that cap space doesn’t mean they intend to use up a hefty portion with an offer sheet. GM David Poile could also be reluctant to part with his draft picks.

Don’t forget that it takes two to tango. Cirelli likely prefers staying in Tampa Bay with a Stanley Cup champion and could be unwilling to entertain an offer sheet.

STLTODAY.COM: In a recent mailbag segment, Jim Thomas was asked if there was any chance of the Blues trading Vince Dunn. While admitting one should never say never, Thomas doubts the 24-year-old defenseman will be moved, pointing out the club already lost blueliner Alex Pietrangelo plus he’s young and affordable.

SPECTOR’S NOTE: Dunn’s not going anywhere. The Blues will get the restricted free agent signed to an affordable short-term deal before training camp opens next month.

← NHL Morning Coffee Headlines - December 13, 2020 NHL Morning Coffee Headlines - December 14, 2020 →
We use cookies on our website to give you the most relevant experience by remembering your preferences and repeat visits. By clicking “Accept”, you consent to the use of ALL the cookies.
Do not sell my personal information.
Cookie SettingsAccept
Manage consent