NHL.COM: Jack Hughes enjoyed his first two-goal game and added an assist as his New Jersey Devils held on for a 4-3 win over the New York Rangers. Devils goaltender Mackenzie Blackwood made 47 saves for the win. Artemi Panarin collected two assists for the Rangers, who lost center Mika Zibanejad to an apparent upper-body injury after falling into the corner boards late in the third period. 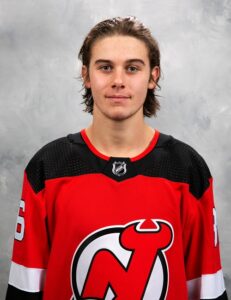 SPECTOR’S NOTE: Hughes and Blackwood were the Devils’ stars in this contest. This was Hughes’ best game in his young NHL career, showing the skills that made him the first-overall pick in the 2019 NHL Draft. An update on Zibanejad’s status could be made later today.

The Philadelphia Flyers blanked the Buffalo Sabres 3-0 thanks to a 40-save performance by goalie Brian Elliott. Kevin Hayes had a goal and an assist for the Flyers, who lost defenseman Philippe Myers and center Morgan Frost to injuries during this contest. Both are slated for MRIs today. Sabres goalie Carter Hutton didn’t return for the third period following a collision in his crease in the second period. Earlier in the day, the Sabres moved winger Kyle Okposo (undisclosed) on injured reserve. He’s yet to play a game this season.

SPECTOR’S NOTE: A big bounce-back win for the injury-depleted Flyers after getting drubbed 6-1 by the Sabres on Monday. The Sabres had plenty of opportunities to score but Elliott held them off the board.

An overtime goal by Frank Vatrano lifted the Florida Panthers over the Chicago Blackhawks 5-4. Panthers’ goalie Sergei Bobrovsky made 30 saves, the most notable stopping Patrick Kane on a penalty shot. Patric Hornqvist and Carter Verhaeghe each scored twice for the Panthers while Dominik Kubalik tallied twice for the Blackhawks, who still seek their first win of the season.

SPECTOR’S NOTE: It’s going to be a long, painful season for the Blackhawks. They’ve given up five goals in each of their first four games.

The Pittsburgh Penguins swept their two-game series with the Washington Capitals with a 5-4 overtime victory. Sidney Crosby tallied the winner in the extra frame as the Penguins overcame a 4-2 deficit. Tom Wilson scored twice for the Capitals. Penguins defensemen Marcus Pettersson and Juuso Riikola left the game with undisclosed ailments and will be evaluated today.

SPECTOR’S NOTE: Crosby collected three points in this contest and is now the Penguins’ leading scorer with five points.

Nikolaj Ehlers scored in overtime as the Winnipeg Jets overcame a 3-1 deficit to edge the Ottawa Senators 4-3. Blake Wheeler had a goal and an assist and Mark Scheifele collected two assists for the Jets. Senators rookie Tim Stuetzle missed the game with what’s been called a minor injury but he isn’t expected to be sidelined for long.

SPECTOR’S NOTE: A tough loss for the Senators, who out-shot the Jets 41-28 in this game.

Tyler Bertuzzi potted an overtime winner to give the Detroit Red Wings a 3-2 decision over the Columbus Blue Jackets. Wings forward Bobby Ryan scored his fourth goal in his first three games of this season, becoming the first player in franchise history to achieve that feat.

SPECTOR’S NOTE: A well-earned victory for the rebuilding Red Wings over a Blue Jackets team whose best players have been anything but through most of the first week of their season.

Colorado Avalanche center Nathan MacKinnon collected two assists, including his 500th career point, in a 3-2 victory over the Los Angeles Kings. Anze Kopitar had two helpers for the Kings. The Avs were playing without goaltender Pavel Francouz and winger Andre Burakovsky as both remain sidelined by injuries suffered during practice on Monday.

SPECTOR’S NOTE: This probably won’t be the last game to be rescheduled during this season. The Dallas Stars had their first four games postponed and rescheduled after several players were placed in COVID-19 protocol during the final days of training camp.

THE DENVER POST: Prior to the Colorado Avalanche’s game with the Los Angeles Kings, they shipped defenseman Ian Cole to the Minnesota Wild in exchange for blueliner Greg Pateryn.

SPECTOR’S NOTE: The Wild made this swap because general manager Bill Guerin was looking for an experienced stay-at-home defenseman. He also knows Cole from their days with the Pittsburgh Penguins and likes what the blueliner could bring to his roster.

The Avs, meanwhile, shed all but $800K of Cole’s $4.25 million annual average value while taking on Pateryn’s $2.25 million AAV. It allows the to put Pateryn on the taxi squad if necessary to create room for promising blueliner Bowen Byram.

NHL.COM: The league will pause the use of pucks with embedded tracking technology because of performance issues. A new supply of tracking pucks will be received soon and put into service once quality-control testing is completed.

← Florida Panthers Could Face Big Changes Following This NHL Season NHL Rumor Mill - January 20, 2021 →
We use cookies on our website to give you the most relevant experience by remembering your preferences and repeat visits. By clicking “Accept”, you consent to the use of ALL the cookies.
Do not sell my personal information.
Cookie SettingsAccept
Manage consent