​Are the Panthers thinking of pursuing Pierre-Luc Dubois? Should the Sabres target Marc-Andre Fleury? Who could be the odd-man-out on the Avalanche blueline? Find out in today’s NHL rumor mill.

COULD THE PANTHERS PURSUE DUBOIS?

FLORIDA HOCKEY NOW: Jimmy Murphy reports there’s a theory that the reason Florida Panthers general manager Bill Zito efforts to get Keith Yandle to waive his no-movement clause was to set up for a deal to acquire Pierre-Luc Dubois. 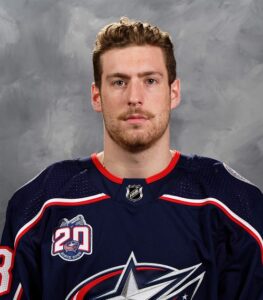 SPECTOR’S NOTE: If Zito was trying to move Yandle I don’t believe the Jackets would’ve been interested even if the Panthers absorbed part of his $6.35 million annual average value. The Jackets’ defense corps is pretty much set, which is why they could send Markus Nutivaara to the Panthers in the offseason in a cost-cutting move. Yandle would have to be moved in a separate deal to another club to free up the cap space for Dubois’ $5 million AAV.

I don’t doubt Zito would love to acquire Dubois but I don’t see him moving Barkov to do so. If anything, I think he would envision Barkov remaining as the Panthers’ first-line center with Dubois centering the second line.

SHOULD THE SABRES TARGET FLEURY?

Murphy also cites an NHL scout suggesting the Buffalo Sabres should target Marc-Andre Fleury. “What the BLEEP are the Sabres waiting for? Get Fleury!”, the scout said. Murphy believes the Vegas Golden Knights are ready to move the 36-year-old goaltender. The Sabres could use an upgrade between the pipes but an NHL management source isn’t sure Sabres GM Kevyn Adams has looked into it.

SPECTOR’S NOTE: There are seven million reasons why the Sabres haven’t acquired Fleury. That’s his annual average value for this season and next. He also has a modified no-trade clause and could be unwilling to accept a trade to Buffalo. Cap Friendly, meanwhile, shows the Sabres only have a projected $1.2 million in cap room right now. Fleury is an expense they can’t afford.

COULD THE AVALANCHE MOVE A DEFENSEMAN?

THE DENVER POST: Mike Chambers and Mark Kiszla discussed what the Colorado Avalanche could do to address their blue-line logjam. The Avs already possess considerable depth in talented young defensemen in Cale Makar, Devon Toews, Samuel Girard, Ryan Graves, Conor Timmins and Bowen Byram, plus they have veterans Erik Johnson and Ian Cole.

Chambers suspects Cole could sit if the young blueliners continue to impress. Kiszla wonders if GM Joe Sakic could use one of those rearguards as trade bait. Johnson’s contract ($6 million AAV, no-movement and modified no-trade clause) would be difficult to move. Chambers suggests Girard would be the most tradeable. Losing his $5 million AAV over the next seven seasons would free up cap room to add a forward or a goaltender.

SPECTOR’S NOTE: Avalanche GM Joe Sakic might at some point consider using one of his defensemen as trade bait to address a roster issue before the Apr. 12 trade deadline. Johnson’s contract all but ensures he won’t be going anywhere. Cale Makar is untouchable and I don’t think Sakic will move Byram or Timmins. Toews is also likely to stay put after signing a four-year deal following his acquisition from the New York Islanders last fall.

Girard, Cole and Graves could become trade candidates. However, there’s no certainty Sakic will shop any of the defensemen this season. We’ll just have to see how things unfold.

Johnson’s no-movement clause means they can’t put him on their taxi squad this season without his permission. I can see them shuttling Byram and Timmins in and out of the taxi squad in the short term. Cole is a UFA this summer but the Avs could prefer hanging onto him for this season.

← NHL Morning Coffee Headlines - January 19, 2021 Florida Panthers Could Face Big Changes Following This NHL Season →
We use cookies on our website to give you the most relevant experience by remembering your preferences and repeat visits. By clicking “Accept”, you consent to the use of ALL the cookies.
Do not sell my personal information.
Cookie SettingsAccept
Manage consent