​Five players who could use a change of scenery, more Victor Mete trade speculation and some suggested changes for the Predators in today’s NHL rumor mill.

FIVE PLAYERS WHO COULD USE A TRADE 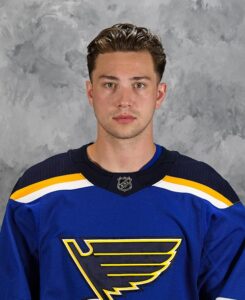 St. Louis Blues defenseman Vince Dunn is among several players who could use a change of scenery (NHL Images).

SPECTOR’S NOTE: I agree with Larkin but there are various reasons why these players might not be moved this season, if at all.

The Flames are reportedly reluctant to move Bennett because of his value as a proven playoff performer. Larkin also noted if they move him they’ll have to protect someone else in this summer’s expansion draft.

Dermott’s having trouble earning a full-time spot this season on Toronto’s blueline. Larkin points out he’s in nearly every Leafs rumor and would be perfect trade bait to add another forward. The Athletic’s Jonas Siegel suggested a Dermott-for-Sam Bennett swap if they can make the dollars work.

Dunn is probably the most likely on this list to get traded. Larkin feels it’s only a matter of time until he’s moved. The Blues reportedly seek a first- or second-round pick in return. There are several clubs that could use him but finding the right fit is the sticking point. The Blues at this point don’t seem in a hurry to trade him.

Mantha’s a big, fast forward with good offensive skills but his inconsistency and injury history hurt his trade value. So does his $5.7 million annual average value.

Virtanen has come up a lot of late in trade rumors but reports out of Vancouver suggest there’s not much of a market for him. He’s brought that on himself with his poor play. Maybe he’ll finally reach his full potential on a different team but there doesn’t appear to be a general manager out there willing to take a chance on him.

Mete’s been a frequent healthy scratch as he’s become the odd man out on the Canadiens’ blueline. However, they haven’t sent him to their taxi squad because another club could scoop him up off waivers.

SPECTOR’S NOTE: Like the Flames with Bennett, the Canadiens aren’t rushing to ship out Mete. They’d prefer hanging onto him as insurance in case injuries strike their defense corps.

Steven Ellis of SI.com/The Hockey News believes Mete would be a good value pickup for teams seeking blueline depth. Those clubs listed by Johnston could be potential destinations for the 22-year-old rearguard whenever Bergevin decides to honor his trade request. However, that move probably won’t happen until the offseason unless one of those clubs makes an irresistible pitch before the Apr. 12 trade deadline.

LATEST ON THE PREDATORS

THE ATHLETIC: In a recent mailbag segment, Adam Vingan was asked what the struggling Nashville Predators should do to avoid sliding into years of becoming a bad team with bloated contracts.

Vingan believes the Predators should become sellers by the April trade deadline if they’re still out of the playoff running by then. He advocates moving players on one-year contracts (Erik Haula, Mikael Granlund, Brad Richardson) for draft picks. They should also consider moving defenseman Mattias Ekholm, who has one year remaining on his cap-friendly contract.

The next step is trying to unload Matt Duchene or Ryan Johansen in this summer’s Seattle expansion draft. He suggested using some of the draft capital acquired at the trade deadline and/or throw in a player to sweeten the deal.

SPECTOR’S NOTE: Vingan acknowledged all of this is easier said than done. Nevertheless, I agree with his take. The Predators have been trending downward since winning the President’s Trophy in 2017-18. They’re near the bottom of the Central Division and the overall standings. It’s time for GM David Poile to acknowledge the obvious that his roster needs at least a significant retooling.

← NHL Morning Coffee Headlines - February 13, 2021 NHL Morning Coffee Headlines - February 14, 2021 →
We use cookies on our website to give you the most relevant experience by remembering your preferences and repeat visits. By clicking “Accept”, you consent to the use of ALL the cookies.
Do not sell my personal information.
Cookie SettingsAccept
Manage consent