PHILLY.COM: Sam Carchidi recently suggested Mattias Ekholm might be a fit on the Philadelphia Flyers’ blueline. He considered the 30-year-old Nashville Predators blueliner as “the most interesting veteran defenseman who might be on the market.” 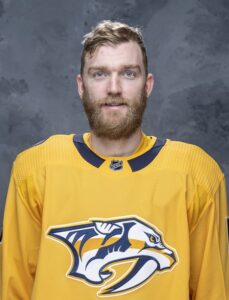 Would Nashville Predators defenseman Mattias Ekholm be a good fit with the Philadelphia Flyers? (NHL Images)

Carchidi observed the 6’4”, 215-pound Ekholm can be a first- or second-pairing defender with an affordable $3.75 million cap hit and can log over 21 minutes per game. The downside is he’s a left-shot rearguard, acquiring him could interfere with the Flyers’ protection list for this summer’s expansion draft and it would probably take a high draft pick and quality prospect to acquire him.

THE ATHLETIC: Charlie O’Connor and Adam Vingan pointed out colleague Pierre LeBrun included the Flyers on his list of four possible landing spots for Ekholm, with the Boston Bruins, Winnipeg Jets and Washington Capitals as the others.

Despite being a left-hand shot, Ekholm played on the right side last season when Predators’ d-man Ryan Ellis was sidelined. One reason the Predators could trade him is to protect Ellis, Roman Josi and Dante Fabbro in the expansion draft. O’Connor believes the Flyers might prefer acquiring a rental defenseman on an expiring contract.

SPECTOR’S NOTE: Ekholm would be a good fit with any of those four teams suggested by LeBrun. The Bruins might be the best one as they’ve been using younger players on the left side of their defense corps this season. It’s going well so far but injuries to Matt Grzelcyk and Jeremy Lauzon could have them considering an experienced, affordable short-term addition.

Speaking of the Bruins…

THE ATHLETIC: Fluto Shinzawa recently examined the Boston Bruins’ options if long-time center David Krejci departs this summer via free agency. He suggested there would be “turbulence” if Charlie Coyle, Jack Studnicka and Trent Frederic slot in at center behind Patrice Bergeron as rival clubs would attack those centers just as they’ve done this season with the Bruins’ young defensemen. Bruins general manager Don Sweeney tends not to re-sign pending UFAs.

In a recent mailbag segment, Shinzawa dismissed the notion of the Bruins using their cap space next season to take on a bad contract to gain extra draft picks and/or prospects. He also believes they’ll attempt to shore up their depth at center over the next couple of years via the draft and perhaps the trade market.

Bruins management and coaching staff might share the fans’ frustration over Jake DeBrusk’s development thus far but Shinawa feels the 24-year-old winger still has too much to toss aside, citing the risk he might blossom elsewhere. He also believes they’d be selling low at this point. He sees the Bruins’ signing goaltender Tuukka Rask to a contract extension.

SPECTOR’S NOTE: It’s going to be interesting to see what the Bruins do with Krejci. If he’s willing to take a pay cut on a short-term deal they’ll keep him. The question is whether he thinks he can get a better deal in a free-agent market where the salary cap is expected to remain flattened. I have my doubts that he wants to move on from the only NHL team he’s ever played for.

DeBrusk’s name has floated in the rumor mill for some time. However, if he had suitable value that would help the Bruins he would’ve been traded by now.

Most speculation I’ve read and heard suggests they would want a good NHL player in return and not a draft pick/prospect package. There was some talk of a DeBrusk-for-Jake Virtanen swap with Vancouver but I don’t see that happening. Virtanen wouldn’t be an improvement over DeBrusk.

← NHL Morning Coffee Headlines - February 25, 2021 NHL Trending Up, Trending Down - Week 6 →
We use cookies on our website to give you the most relevant experience by remembering your preferences and repeat visits. By clicking “Accept”, you consent to the use of ALL the cookies.
Do not sell my personal information.
Cookie SettingsAccept
Manage consent