​Making the case for the Leafs to re-sign Frederik Andersen plus the latest on the Ducks in today’s NHL morning coffee headlines.

SHOULD THE LEAFS RE-SIGN ANDERSEN?

TORONTO STAR: Damien Cox believes the Maple Leafs might have to re-sign Frederik Andersen because there are no suitable replacement goaltenders in sight. Nobody will suggest backup Michael Hutchinson is a No. 1 goalie while we’ve seen too little of Jack Campbell’s work to suggests he’s a suitable replacement for Andersen. Joseph Woll may or may not become an NHL netminder. 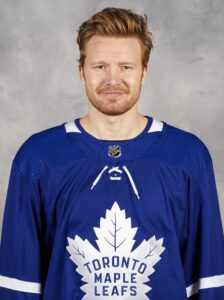 The Leafs aren’t the only team in that boat. Cox points to a number of NHL teams who lack suitable replacements for their current starters or have a promising one that hasn’t fully developed yet.

Free-agent options this summer include Pekka Rinne, Tuukka Rask and Jordan Binnington. However, Rinne and Rask are well into their thirties while the St. Louis Blues are unlikely to let Binnington go. It’s also uncertain how well a goaltender will perform in a new city as the Florida Panthers are finding out with Sergei Bobrovsky.

SPECTOR’S NOTE: This isn’t a trade or free-agent rumor but Andersen’s future will increasingly become the topic of speculation the longer he goes unsigned by the Leafs. His potential departure will generate plenty of conjecture this summer over how the Leafs would replace him.

Some Leafs fans are unhappy with Andersen’s performance but there’s no denying he’s played well despite being arguably the most overworked NHL goaltender over the past four years. Questions remain over whether he can carry the Leafs to the Stanley Cup but at least he gives them a chance to win on most nights.

As Cox pointed out, we haven’t seen enough of Campbell’s work to determine if he’d be a better long-term option as the Leafs’ starter. Maybe he is but is he worth the gamble for a franchise whose fans are starving for a championship? Some will argue yes but this could just as easily go sideways, leaving the Leafs struggling to fill the gap between the pipes while wasting the best seasons of their top young players.

If there were suitable replacement options via trade or free agency I would expect Leafs general manager Kyle Dubas to pursue them. As Cox points out, however, those options aren’t available. They might be able to land a promising young goalie via trade but I don’t see anyone obtainable right now who could backstop them to the Cup.

The one downside of re-signing Andersen is he could seek a deal comparable to the six-year, $6 million per season deal Jacob Markstrom got last fall with the Calgary Flames. If Dubas can use the next season’s flattened salary cap as leverage to convince Andersen to accept a short-term deal for $6 million AAV that could buy some time to develop or acquire a suitable replacement.

THE ATHLETIC: Eric Stephens recently took note of the Anaheim Ducks placing low-performing Adam Henrique on waivers last weekend as a wake-up call to their struggling roster. While Henrique went unclaimed Stephens wonders if GM Bob Murray might try to trade him in hopes a rival club might gamble on the veteran center regaining his form in the right situation with a better roster. They could take back a bad contract with less term on it or retain part of Henrique’s salary but the remaining three years of the deal would be a sticking point. Burying him in the minors or buying him out seems unlikely.

Stephens also believes real change for the Ducks must start with Murray. They’ve got too many expensive, underperforming veterans while many of their promising youngsters haven’t played up to expectations.

SPECTOR’S NOTE: The Ducks are a mess. They’ve been steadily declining since 2017 and show little sign of improvement.

If ownership decides a rebuild is necessary it could start in the front office. We could also start hearing trade rumors involving players such as goalie John Gibson, defensemen Cam Fowler, Josh Manson and Hampus Lindholm and forward Rickard Rakell.

← NHL Morning Coffee Headlines - February 27, 2021 The Best NHL Teams To Bet...And Bet Against →
We use cookies on our website to give you the most relevant experience by remembering your preferences and repeat visits. By clicking “Accept”, you consent to the use of ALL the cookies.
Do not sell my personal information.
Cookie SettingsAccept
Manage consent