​More Jack Eichel speculation, almost everyone on the Predators could be available in the trade market, and Ethan Bear’s trade value in the Sunday NHL Rumor Roundup.

SI.COM/THE HOCKEY NEWS: Matt Larkin believes the Jack Eichel era is heading toward a cliff in Buffalo. The Sabres captain was disgruntled over the club’s direction before last year’s front-office purge, the team isn’t scoring and Larkin expects rival clubs could soon start making trade offers for their franchise player. 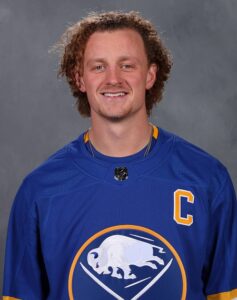 Larkin cites recent comments by Sportsnet’s Elliotte Friedman indicating Eichel was unhappy over his situation last summer. While he didn’t request a trade, rival teams did make inquiries. Larkin wonders how much more Eichel will endure before he wants out.

Eichel’s no-movement clause doesn’t kick in until after the 2021-22 season, giving the Sabres a window of opportunity to trade him to any team. They would get significant offers because the 24-year-old center is in the prime of his playing career.

Larkin acknowledged the idea of moving Eichel and pending free agent winger Taylor Hall hurts. However, if the Sabres aren’t improving with those two in the lineup it might be best to hit the reset button.

TORONTO SUN: Michael Traikos also wonders if it’s time for the Sabres to trade Eichel. He points to this being the center’s sixth season in the league with a team showing no sign of progress. Traikos pondered the possibility of Eichel following the same path as Patrik Laine and Pierre-Luc Dubois and ask his agent to request a trade.

SPECTOR’S NOTE: I don’t see the Sabres shopping Eichel before the trade deadline if they haven’t climbed into playoff contention by then. However, I expect ownership and management will sit down with their captain to discuss the club’s situation and his future in Buffalo.

The Sabres will hang onto Eichel if he’s willing to stay put. If one side or the other believes it’s time to move on, an offseason trade makes the most sense. That’s when teams have more cap space and a willingness to make blockbuster moves.

Possible destinations for Eichel could be rebuilding teams with plenty of salary-cap space to absorb his $10 million annual average value and with sufficient assets to help the Sabres rebuild. The Detroit Red Wings, Los Angeles Kings and New York Rangers fall into that category and could be among the suitors.

FEW UNTOUCHABLES AMONG THE PREDATORS.

SPORTSNET (via KUKLA’S KORNER): Elliotte Friedman reports word is there are only three untouchables – Roman Josi, Ryan Ellis and Pekka Rinne – on the Nashville Predators. He believes they could be willing to listen to trade offers on almost everyone else, including winger Filip Forsberg and defenseman Dante Fabbro.

SPECTOR’S NOTE: Friedman points out Rinne is among the untouchables because he’s coming to the end of his contract. I doubt there would be much of a market for the 38-year-old goaltender given his fading performance and $5 million annual average value.

Just because the Preds are willing to listen to offers on guys like Forsberg and Fabbro doesn’t mean those players will be traded. Those two are among their better players and I doubt they’ll be moved unless there’s a mind-blowing offer for either guy.

The most obvious trade candidates are pending UFAs such as Mikael Granlund, Erik Haula and Brad Richardson. Mattias Ekholm, Calle Jarnkrok and Nick Cousins could also be available as they each have a year remaining on their contracts with affordable salary-cap hits.

Ekholm has been often mentioned in recent days as perhaps their most desirable trade chip. That would change, of course, if guys like Forsberg and Fabbro are available.

COULD THE OILERS SHOP ETHAN BEAR?

THE ATHLETIC: Jonathan Willis recently observed the notion of the Edmonton Oilers shopping Ethan Bear has been floating around. Willis doubts they will move the 23-year-old defenseman because they lack a proper replacement for him, weakening their blue line. He feels any assessment of Bear as a trade chip only makes it clear how important he is to the Oilers.

SPECTOR’S NOTE: I can’t argue with Willis’ assessment. Sure, the Oilers could use him as a trade chip to address another roster issue but doing so would then leave a hole to be addressed on the defense.

← NHL Morning Coffee Headlines - February 21, 2021 NHL Morning Coffee Headlines - February 22, 2021 →
We use cookies on our website to give you the most relevant experience by remembering your preferences and repeat visits. By clicking “Accept”, you consent to the use of ALL the cookies.
Do not sell my personal information.
Cookie SettingsAccept
Manage consent