Recaps of Saturday’s action, including the Lightning finally raising their Stanley Cup banner, plus the latest on Erik Karlsson, Keith Yandle and more in today’s NHL morning coffee headlines.

NHL.COM: Artemi Panarin collected an assist in his return to the New York Rangers lineup in a 4-0 victory over the Boston Bruins. Keith Kinkaid made 18 saves for the shutout while Chris Kreider, Mika Zibanejad and Pavel Buchnevich each collected two points. The Bruins (32 points) maintain a three-point lead over the Philadelphia Flyers for fourth place in the MassMutual East Division. The Bruins played without winger Jake DeBrusk as he was placed on the league’s COVID-19 protocol list.

An overtime goal by Zach Werenski lifted the Columbus Blue Jackets past the Dallas Stars 4-3, giving the Jackets their first win in four contests. Jack Roslovic collected three assists while Max Domi had a goal and an assist for the Jackets (28 points), who sit five behind the fourth-place Chicago Blackhawks in the Discover Central Division. 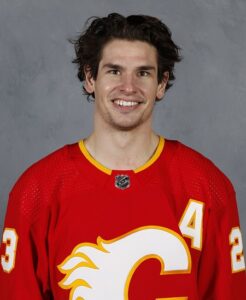 Two first-period goals by Sean Monahan gave the Calgary Flames a 3-1 victory over the Montreal Canadiens. Monahan now has 200 career goals. Jeff Petry tallied his league-leading 11th goal among NHL defensemen for the Canadiens (31 points), who hold only a two-point lead over the Flames in the Scotia North Division. It’s the Flames’ second straight win in as many games under new head coach Darryl Sutter.

Pittsburgh Penguins backup Casey DeSmith made 24 saves for a 3-0 blanking of the Buffalo Sabres, handing the latter their 10th straight loss. Penguins captain Sidney Crosby tallied his 10th of the season as his club (35 points) opened a three-point lead over the slumping Bruins for third in the East Division.

The New York Islanders picked up their eighth straight victory by edging the New Jersey Devils 3-2. The Isles overcame a 2-1 deficit on third-period goals by Kieffer Bellows as they maintained their lead in the East Division with 40 points.

Alex Ovechkin scored his 716th career goal as his Washington Capitals held off the Philadelphia Flyers 5-4. Ovechkin is one goal behind Phil Esposito for sixth place on the all-time goal-scoring list. Washington (38 points) sit two back of the first-place Islanders in the East Division. Capitals center Lars Eller left the game in the first period with an apparent injury to his right leg.

The Tampa Bay Lightning raised their 2020 Stanley Cup championship banner in front of 3,800 fans at Amelie Arena prior to defeating the Nashville Predators 6-3. Tyler Johnson and Blake Coleman each had a goal and an assist for the Bolts (40 points), who hold possession of first place in the Central Division with a game in hand over the Florida Panthers.

Speaking of the Panthers (40 points), they got two goals from captain Aleksander Barkov to double up the Chicago Blackhawks 4-2. Before the game, the Panthers honored defenseman Keith Yandle for recently passing the 1,000 game milestone. They also hold a one-point lead over the third-place Carolina Hurricanes in the Central.

Third-period goals by Adam Lowry, Nikolaj Ehlers and Mark Scheifele carried the Winnipeg Jets over the Toronto Maple Leafs 5-2. The first-place Leafs (40 points) sit four points ahead of the Jets in the North Division but they’ve also dropped four of their five games.

The Vancouver Canucks snapped the Edmonton Oilers’ four-game win streak with a narrow 2-1 victory. Tyler Myers scored the winner in the third period while Thatcher Demko kicked out 34 shots for the win. The Oilers (36 points) slip into third place in the North Division.

Evander Kane scored in his third straight game as the San Jose Sharks downed the Anaheim Ducks 3-1. Martin Jones made 26 saves for the Sharks.

← NHL Betting: McDavid, Kane, and Matthews Top The Hart Charts Sunday NHL Rumor Roundup - March 14, 2021 →
We use cookies on our website to give you the most relevant experience by remembering your preferences and repeat visits. By clicking “Accept”, you consent to the use of ALL the cookies.
Do not sell my personal information.
Cookie SettingsAccept
Manage consent