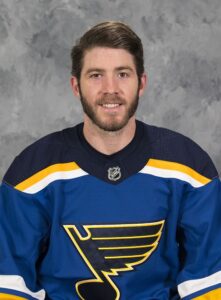 SPECTOR’S NOTE: Hoffman was a healthy scratch from last night’s game against the Vegas Golden Knights. Blues coach Craig Berube said that move was made to insert Sammy Blais into the lineup. Trade speculation about the winger will ramp up if he’s scratched from the Blues’ next two games before Monday’s trade deadline.

MacLean said his “reasonable source” indicated the Oilers were looking at a deal that has Hall and Ryan Nugent-Hopkins under contract for next season for a combined $12 million.

Staples believes the Oilers would have to trade a forward such as Zack Kassian or James Neal to free up the salary-cap dollars necessary to acquire Hall or move out a goalie like Mikko Koskinen. The Oilers’ first-round pick would also have to be included in the deal.

SPECTOR’S NOTE: What MacLean’s source seems to be suggesting is the Oilers are looking at getting ahead of the free-agent market by acquiring and signing Hall, who (like Nugent-Hopkins) is due to become an unrestricted free agent this summer.

I don’t see how the Oilers can afford to acquire Hall at the trade deadline. They’re maxed out at the cap and have $2.3 million in long-term injury reserve money remaining. They also don’t have any picks in the second, third- and fifth rounds of this year’s draft so I don’t believe general manager Ken Holland will part with this year’s first, or next year’s for that matter. I also don’t see a trade market for Kassian or Neal.

Anything’s possible, of course, and if Holland could pull this off without giving up a first-round pick it’ll be an impressive feat. I just don’t believe we’ll see Hall coming to Edmonton at the trade deadline.

Columbus Blue Jackets forward Nick Foligno sits at No. 4 on the list.

THE ATHLETIC: Aaron Portzline reports Blue Jackets GM Jarmo Kekalainen won’t trade Foligno without the captain’s approval. The 32-year-old forward has a 10-team no-trade list and it sounds like he’d be open to a move but only for the right situation. The Colorado Avalanche, Toronto Maple Leafs and Minnesota Wild could be among his suitors.

SPECTOR’S NOTE: I had my doubts that Foligno would be traded but this report changed my mind. He could be moved by the deadline if Kekalainen first receives a suitable offer and Foligno is willing to accept it, especially if it comes from one of the teams on his no-trade list.

NBC SPORTS PHILADELPHIA: Jordan Hall isn’t putting much stock into Sportsnet’s Elliotte Friedman saying he can see the Pittsburgh Penguins having an interest in Laughton. While Penguins general manager (and former Flyers GM) Ron Hextall knows Laughton’s value and could be interested, Hall believes the Flyers’ asking price could be quite high.

SPECTOR’S NOTE: The Pittsburgh Post-Gazette’s Mike DeFabo reports Hextall is in the market for a big, physical forward, preferably an experienced center. Laughton could fit the bill but, as Hall pointed out, the Flyers will set an expensive price for him.

DeFabo notes the Penguins have few tradeable assets plus there’s also the salary crunch to contend with. He anticipates Hextall could instead acquire a bottom-six forward if he makes a move at all.

Anaheim Ducks defenseman Josh Manson moves up into tenth on the list.

BOSTON HOCKEY NOW: Jimmy Murphy wonders if the Bruins and Anaheim Ducks are talking trade again. The two clubs have a recent history of deals before the trade deadline.

Boston assistant GM John Ferguson Jr has been scouting the California-based teams. Murphy isn’t sure the Bruins are looking at Manson but they have had inquired about the blueliner in the past. The Ducks’ asking price, however, could be high.

SPECTOR’S NOTE: Murphy also reported the Bruins were among the clubs interested in Kyle Palmieri before he was shipped last night to the New York Islanders, with one of the trade scenarios involving Bruins winger Jake DeBrusk. The source couldn’t confirm if the Bruins said no to that.

The Bruins do need blueline help. If a suitable deal for a scoring winger isn’t available perhaps GM Don Sweeney shifts his focus to a defenseman like Manson. The asking price, however, is reportedly a first-round pick and a top prospect.

SPECTOR’S NOTE: TVA Sports’ Renaud Lavoie wonders if the Montreal Canadiens could pursue Dunn or Bozak. With Brendan Gallagher going on LTIR, they have sufficient salary-cap wiggle room to make another addition before the trade deadline. Adding a top-four defenseman is a bigger need for the Habs than a bottom-six center.

SPECTOR’S NOTE: I don’t think the Blackhawks will trade Zadorov while they’re still jockeying for a playoff spot in the Discover Central Division. The Jackets aren’t facing pressure to trade Merzlikins. He has another season left on his contract and is exempt from this summer’s expansion draft.

SPECTOR’S NOTE: Driedger’s played very well backing up erratic Panthers starter Sergei Bobrovsky. Trading him while they battling the Tampa Bay Lightning and Carolina Hurricanes for first place in the Central wouldn’t be a wise decision.

← NHL Morning Coffee Headlines - April 8, 2021 Top 5 Goaltenders Who Could Be Dealt By the NHL Trade Deadline →
We use cookies on our website to give you the most relevant experience by remembering your preferences and repeat visits. By clicking “Accept”, you consent to the use of ALL the cookies.
Do not sell my personal information.
Cookie SettingsAccept
Manage consent