Are offseason changes coming for the Predators? Has Evgeny Kuznetsov played his final game with the Capitals? Are the Senators interested in Flyers captain Claude Giroux? Check out the latest in today’s NHL rumor mill.

ESPN.COM: Emily Kaplan believes it’s time for the Nashville Predators to start incorporating more young players into their lineup. She also anticipates they’ll prioritize re-signing defenseman Mattias Ekholm if he seeks a long-term extension before his contract expires next summer. 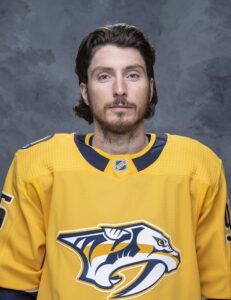 Could the Nashville Predators attempt to trade Matt Duchene this summer? (NHL Images).

Free-agent goaltender Pekka Rinne won’t be back as Juuse Saros has taken over the starter’s job. Kaplan proposed trying to entice the Seattle Kraken into selecting Ryan Johansen or Matt Duchene in this summer’s expansion draft.

THE ATHLETIC: Joe Rexrode believes the Predators must figure out where they are and how to get to the next level. Assuming long-time general manager David Poile isn’t asked to leave or doesn’t step down, he’ll have to figure out what to do with Johansen, Duchene and pending free agent Mikael Granlund.

SPECTOR’S NOTE: Attempting to unload overpaid underachievers Johansen and Duchene won’t be easy. Both have several seasons remaining on their respective contracts with each carrying an $8 million annual average value. They lack no-trade protection but those contracts will be tough to move with the salary cap remaining flat at $81.5 million next season.

Poile will have to get creative to find a way to move one or both. Getting the Kraken to select one of them will mean offering up a sweetener in the form of a draft pick, a top prospect or a good young player. That still might not be enough to get it done. Maybe Poile finds a club will to be a third-party broker by taking on part of the cap hit in return for a pick or prospect.

HAS KUZNETSOV PLAYED HIS FINAL GAME WITH THE CAPITALS?

THE ATHLETIC: Tarik El-Bashir reported Washington Capitals GM Brian MacLellan addressed the recent trade rumors about Evgeny Kuznetsov during his end-of-season press conference on Wednesday. “We’re always open to trading people if it makes sense,” he said. “If it’s going to make our team better, we’re open to it. “

SPECTOR’S NOTE: MacLellan also said they need Kuznetsov to play at his highest ability. If that wasn’t possible, they wouldn’t be a good team and they’ll have to make some other decisions.

The Capitals GM could entertain trade offers for Kuznetsov this summer. Then again, this could be his public way of reminding the center that his tenure in Washington is in jeopardy unless he cleans up his act on and off the ice.

Kuznetsov’s play has declined over the last couple of years. He received a three-game suspension by the league in 2019 for “inappropriate conduct” less than a month following a four-year ban from international competition following a positive test for cocaine. He tested positive twice this year for COVID-19 and was benched for one game earlier this month after he and goalie Ilya Samsonov missed a team function.

Those factors could impede MacLellan’s efforts to trade Kuznetsov. So could his $7.8 million annual average value over the remaining four years of his contract and his 15-team no-trade clause.

OTTAWA SUN: Bruce Garrioch reports there’s speculation among Senators followers over Claude Giroux’s future with the Philadelphia Flyers. He becomes an unrestricted free agent next summer. Garrioch considers it doubtful he’ll be traded because of his no-move clause and his desire to stay in Philadelphia.

SPECTOR’S NOTE: That speculation linking Giroux to the Senators wasn’t generated by media sources. The Athletic’s Ian Mendes recently observed the “Giroux-to-Ottawa” talk that appeared among Senators fans on social media in recent weeks. The Flyers captain spends his offseasons in the Ottawa area but Mendes doubted that would be a factor in his future plans. If Giroux and the Flyers part company, the 33-year-old center will likely want to join a Stanley Cup contender.

Garrioch believes there are other possibilities in the trade and free-agent markets if the Senators decide to bring in an experienced center. His list included Sean Monahan of the Calgary Flames, Nazem Kadri of the Colorado Avalanche, and Edmonton’s Ryan Nugent-Hopkins.

He also mentioned Buffalo Sabres captain Jack Eichel but doesn’t believe that move makes much sense for the Senators. He also dismissed Washington’s Evgeny Kuznetsov because of his hefty contract.

← NHL Morning Coffee Headlines - May 28, 2021 NHL Playoffs: Canadiens Stay Alive with 4-3 OT Win Over Maple Leafs →
We use cookies on our website to give you the most relevant experience by remembering your preferences and repeat visits. By clicking “Accept”, you consent to the use of ALL the cookies.
Do not sell my personal information.
Cookie SettingsAccept
Manage consent