What next for the Rangers following yesterday’s front-office purge? Could Rasmus Sandin’s emergence on the Leafs’ blueline lead to a Morgan Rielly trade? Which Sharks forwards could end up on this summer’s trade block? Find out in today’s NHL rumor mill.

NEW YORK POST: Mollie Walker believes the New York Rangers replacing team president John Davidson and general manager Jeff Gorton yesterday with Chris Drury indicates ownership wants the current roster reconstruction wrapped up quickly. Drury will be expected to turn the Rangers into a Stanley Cup contender as soon as possible. Reaching the playoffs was a goal this season but will become a requirement in 2021-22. 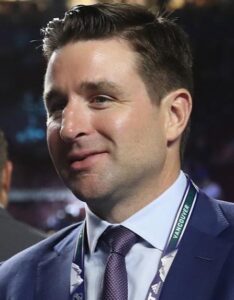 SPECTOR’S NOTE: Former Rangers GM Glen Sather will be working with Drury in a consulting role. Sather was well known for his wheeling and dealing during his long management career. He would prove useful if ownership pressures Drury to explore this summer’s trade and free-agent markets to accelerate the rebuild.

The incident earlier this week with Washington Capitals winger Tom Wilson showed a glaring need for more grit in the New York Rangers’ lineup. The club is expected to address its lack of experienced and heavy skaters in the offseason.

SPECTOR’S NOTE: The Rangers have considerable depth in young players and prospects to use as trade bait to address that need. Cap Friendly indicates they have $55.6 million invested in 17 players, giving Drury sufficient cap space to target teams looking to shed salary this summer or to pursue unrestricted free agents.

Walker also reported former Rangers captain Mark Messier yesterday told ESPN NY radio he’s ready to help the club any way he can. He believes “One thousand percent” he could coach despite having no prior experience.

SPECTOR’S NOTE: I admire Messier’s confidence. However, the Rangers will need an experienced, respected bench boss if they replace David Quinn as head coach. Messier doesn’t tick that box.

TORONTO STAR: Kevin McGran recently suggested the emergence of Rasmus Sandin on the Maple Leafs’ blueline could make things a little uncomfortable for Morgan Rielly. If the club develops faith in Sandin, trading Rielly and his $5 million cap hit for next season to free up money to re-sign Zach Hyman and Frederik Andersen could become an option.

McGran feels Rielly could fetch a return comparable to the first-round pick and prospect the Leafs got for shipping Kaspari Kapanen to the Pittsburgh Penguins. However, the blueliner would be safe if Andersen isn’t re-signed.

SPECTOR’S NOTE: McGran’s just spitballing here. I don’t think Rielly’s got anything to worry about. I’ll be very surprised if the Leafs bring back Andersen. They’ll likely stick with Jack Campbell as their starter and seek a reliable, affordable backup for him in the offseason.

THE ATHLETIC: Kevin Kurz suggests San Jose Sharks forwards Timo Meier and Kevin Labanc could become expendable after being pushed out of the top-six at times in recent weeks. He speculates one or both could be moved out this summer, perhaps in pursuit of an effective third-line center.

SPECTOR’S NOTE: Meier’s got a $6 million annual salary-cap hit through 2022-23 while Labanc’s is $4725 million annually through 2023-24. Those contracts could prove tough to move with the salary cap staying around $81.5 million next season. It’s not impossible to move them but it could be more of a dollar-in, dollar-out scenario or perhaps the Sharks will have to retain some salary in the deals.

← NHL Morning Coffee Headlines - May 6, 2021 What Next For the Chicago Blackhawks? →
We use cookies on our website to give you the most relevant experience by remembering your preferences and repeat visits. By clicking “Accept”, you consent to the use of ALL the cookies.
Do not sell my personal information.
Cookie SettingsAccept
Manage consent