What would be a fair return for Mitch Marner if the Leafs shopped him in the trade market? Should the Jets shop Kyle Connor for a defenseman? What moves should the Oilers make this summer? Check out the latest in today’s NHL rumor mill.

SPORTSNET: In his latest Toronto Maple Leafs mailbag, Luke Fox was asked if the club could win a Mitch Marner trade. While acknowledging the front office’s belief in the 24-year-old playmaker, Fox believes general manager Kyle Dubas would want a return that fits with his bet-on-young skill vision that helps the club now. He also doesn’t foresee Marner requesting a trade. 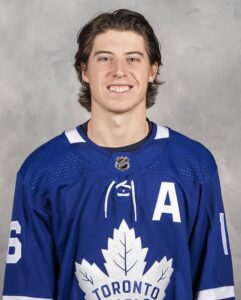 He doubted Dubas would accept someone like Columbus’ Patrik Laine or Seth Jones or Calgary’s Matthew Tkachuk in return. However, he could listen if the Buffalo Sabres offered up center Jack Eichel.

John Tavares’ injury highlights the Leafs lack of center depth. Fox suggests shifting Tavares to the wing as he ages and his foot speed slows.

Eichel for Marner straight up would work in terms of player value and cap dollars. Nevertheless, I doubt it’s a move we’ll see take place between these two long-standing rivals.

Fox was also asked which players the Leafs should add to address the lack of killer instinct team president Brendan Shanahan felt his club still needs. He wondered if Anaheim’s Ryan Getzlaf or Winnipeg’s Paul Stastny would accept a Joe Thornton deal, or if Colorado’s Brandon Saad would come more cheaply than Zach Hyman.

His other suggested options include Minnesota’s Nick Bonino, Vegas’ Mattias Janmark and Dallas’ Jamie Oleksiak. He also proposed it would be great to see what a healthy Nick Foligno could do.

SPECTOR’S NOTE: Dubas will have to engage in more salary-cap gymnastics given his club’s limited cap space to address that need. I think Getzlaf re-signs with Anaheim or retires. Stastny might be a possibility. Saad could cost more than Hyman.

The Wild could re-sign Bonino if he’s willing to accept a pay cut from his current $4.1 million cap hit. If not, he could be a good option for the Leafs. Janmark and Oleksiak could also be worthwhile cost-effective additions.

Foligno could also help if he’s fully healthy but that depends on whether he sees a future in Toronto or if they feel they should look toward younger alternatives.

THE PROVINCE: Ben Kuzma wondered if the Vancouver Canucks would be interested in Alex Kerfoot. The Leafs aren’t expected to protect the 26-year-old center in next month’s expansion draft. They need to clear cap space if they hope to re-sign Zach Hyman. The Leafs can’t afford to take back salary but perhaps they’d accept a draft pick or prospect.

SPECTOR’S NOTE: Kuzma noted the Canucks pursue Kerfoot four years ago as a college free agent before he signed with the Colorado Avalanche. He could be an affordable option to bolster the Canucks’ depth at center.

SHOULD THE JETS SHOP CONNOR FOR A DEFENSEMAN?

WINNIPEG FREE PRESS: Mike McIntyre believes it’s time for the Jets to pay the price to acquire some high-end defensive talent if they wish to be more than playoff also-rans. Dustin Byfuglien, Toby Enstrom, Jacob Trouba, Tyler Myers and Ben Chiarot all departed since the Jets marched to the 2018 Western Conference Final.

McIntyre doubts we’ll see any significant off-season activity out of Winnipeg based on their history. However, he wonders at what point general manager Kevin Cheveldayoff will be forced to consider moving a core player to balance a lineup that isn’t good enough.

Other than goaltender Connor Hellebuyck and perhaps winger Nikolaj Ehlers, McIntyre doesn’t believe there should be an untouchable on the Jets roster. He proposed shopping winger Kyle Connor, who struggled in the Montreal series after center Mark Scheifele was suspended. The Jets’ crop of promising young skaters like Mason Appleton, Jansen Harkins and Cole Perfetti could give them the freedom to use Connor as trade bait to address their blueline issues.

SPECTOR’S NOTE: Cheveldayoff has occasionally made a big move during his tenure as Jets GM, the latest being his swap of Patrick Laine for Pierre-Luc Dubois. For the most part, however, he tends to be patient, sometimes to a fault.

The Jets GM could surprise us with a major offseason move. Like McIntyre, however, I don’t expect him to shop a core player like Connor this summer. He could instead look for affordable options via trade or free agency while preparing to promote promising youngsters like Ville Heinola or Dylan Samberg into the lineup.

THE LATEST ON THE OILERS

SPECTOR’S NOTE: The Oilers intend to bring back 39-year-old Mike Smith for another season but could shop Mikko Koskinen. The Islanders aren’t in a hurry in shop Varlamov but inquiring with the Jackets about Merzlikins or Korpisalo makes sense. It wouldn’t hurt to kick tires on Andersen or Ullmark.

Allen also suggested the Oilers try to come up with enough assets to bundle with James Neal to get a rebuilding club with cap space (Detroit Red Wings) to take the winger off their hands.

SPECTOR’S NOTE: I don’t doubt Holland will consider that option. The assets in that package, however, could be more than he’s willing to part with. A contract buyout remains possible for Neal if he isn’t moved in a cost-cutting deal.

SPECTOR’S NOTE: The Oilers are working on the first two. DeAngelo’s character issues are a red flag but there could be clubs interested in the puck-moving defenseman. If the Oilers were interested, they could wait until he’s bought out of his current contract and then sign him as a free agent.

← NHL Morning Coffee Headlines - June 12, 2021 NHL Morning Coffee Headlines - June 13, 2021 →
We use cookies on our website to give you the most relevant experience by remembering your preferences and repeat visits. By clicking “Accept”, you consent to the use of ALL the cookies.
Do not sell my personal information.
Cookie SettingsAccept
Manage consent