Could the Avalanche let Gabriel Landeskog walk via free agency? Could they shop Samuel Girard? Check out the latest in today’s NHL rumor mill. 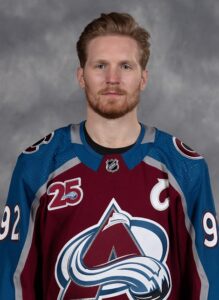 They mused over Gabriel Landeskog’s future with the club following his disappointing performance against the Golden Knights. Chambers speculates the Avs could offer their captain a “take it or leave it” offer of $5 million annually and not at his preferred term. O’Halloran believes a “bad team with salary-cap space” like the Los Angeles Kings and Anaheim Ducks seeking a “heart-and-guts leader like Landeskog” will give him an offer he can’t or won’t refuse.

The Avs will get some additional cap space when they lose a player to the Seattle Kraken in the expansion draft but it will still be expensive to re-sign those four. They can’t afford to lose Grubauer to free agency and Makar will get a hefty raise as a Norris Trophy finalist.

How much Landeskog wants will determine if he still has a future in Colorado. Chambers’ pitch of $5 million annually would probably ensure his departure.

Samuel Girard also had a difficult series against the Golden Knights. The 23-year-old defenseman is earning $5 million annually through 2025-26. Kiszla suggests Sakic check Girard’s value in the trade market, pointing out they have enough blue-line “wizardry” with Makar. O’Halloran thinks Sakic will listen to offers as the Avs need cap flexibility for Makar’s new contract. If they keep Girard, O’Halloran believes they need to add a defenseman like Jamie Oleksiak to give him the space he needs to use his puck-moving skills.

SPECTOR’S NOTE: Moving Girard to free up some cap space makes sense, but it could also deplete their defense corps if they lose an unprotected defenseman (like perhaps Ryan Graves) in the expansion draft. If they trade Girard they could promote from within or perhaps look for an affordable physical defender.

If Sakic decides to make a blockbuster move, Chambers believes he should target a third-line power forward similar to Vegas’ Alex Tuch and “a big, heavy defenseman”. Kiszla proposed offering Girard to the Columbus Blue Jackets for Seth Jones, though he admitted the Jackets could be hesitant to do that deal. O’Halloran proposed pursuing Buffalo’s Jack Eichel but also suggested more realistic options like Montreal’s Phillip Danault or Toronto’s Nick Foligno.

SPECTOR’S NOTE: Sakic has shown in the past his willingness to make big moves. We can’t discount he’ll make a big deal or two this summer to address his club’s needs.

Trading for Jones seemed like a bad idea given the Avs’ blueline depth. But if they lose Graves and decide to trade Girard, perhaps pursuing the Jacket defenseman wouldn’t be such a bad idea. Sakic could consider signing Danault or Foligno via free agency but he could seek better options in the trade market.

← NHL Morning Coffee Headlines - June 14, 2021 NHL Morning Coffee Headlines - June 15, 2021 →
We use cookies on our website to give you the most relevant experience by remembering your preferences and repeat visits. By clicking “Accept”, you consent to the use of ALL the cookies.
Do not sell my personal information.
Cookie SettingsAccept
Manage consent