Could the Oilers target a Lightning winger in this summer’s trade market? Is this season the last for Matt Dumba and Zach Parise with the Wild? Check out the latest in today’s NHL rumor mill.

COULD THE OILERS TARGET A LIGHTNING WINGER?

The Tampa Bay Lightning would be an obvious place to start because of their limited cap space and forwards Blake Coleman and Barclay Goodrow are among their pending unrestricted free agents. 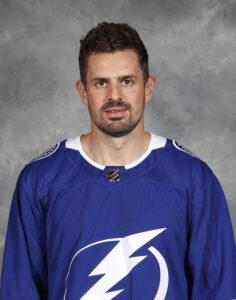 Could the Edmonton Oilers have interest in a Tampa Bay Lightning winger such as Alex Killorn? (NHL Images)

They could attempt to shed salary by trading a veteran forward at a bargain price. Alex Killorn, Ondrej Palat or Yanni Gourde could become a trade candidate. Staples doubts Killorn will be available given his strong performance in this year’s playoffs.

SPECTOR’S NOTE: With over $22 million in cap space (as per Cap Friendly), Oilers general manager Ken Holland should have sufficient cap room to acquire a top-six winger via trade or free agency even if he re-signs Nugent-Hopkins, Mike Smith and Adam Larsson. He could have more if he buys out James Neal and/or Mikko Koskinen and finds a trade partner to take Zack Kassian off his hands. Holland could be willing to talk trade with the Lightning depending on who they’re trying to offload this summer.

Something’s gotta give in Tampa Bay this summer. They could, as Staples suggested, buy out Tyler Johnson or hope the Seattle Kraken select him in the expansion draft. Even then, they could still trade another forward to get some additional wiggle room under the cap. That could force them to part with Palat, Gourde or Killorn.

Gourde’s full no-trade makes him the least likely of that trio to be moved. Killorn has a 16-team no-trade clause. Palat’s full no-trade becomes a modified no-trade next season in which he submits a 20-team list of preferred destinations.

Staples recently noted Oilers insider Bob Stauffer speculating the Pittsburgh Penguins or New York Rangers could have interest in Kassian. Some Oilers followers could be against trading Kassian because of his physical presence. However, he’s carrying a $3.2 million annual cap hit through 2023-24. Given the decline in his offensive production, the Oilers would be better off trading him and finding a more affordable option.

LATEST ON DUMBA AND PARISE

STARTRIBUNE.COM: Sarah McLellan recently reported questions about Matt Dumba’s future with the Minnesota Wild have increased of late with the expansion draft on the horizon. With most teams tending to protect three defensemen and three Wild blueliners (Ryan Suter, Jared Spurgeon and Jonas Brodin) carrying no-movement clauses, Dumba could be left exposed in the expansion draft or traded beforehand.

Dumba, however, said he hopes to remain with the Wild. He said he grew accustomed to his name surfacing in the rumor mill near the trade deadline.

TWINCITIES.COM: Dane Muzitani recently reported Zach Parise told reporters he wants to return with the Wild next season. Because of his hefty contract, finding a trade partner seems unlikely while the front office doesn’t seem interested in going the buyout route.

Parise’s future came into question as he was dropped to the fourth line this season and was a healthy scratch late in the season and during the first three games of their seven-game series against the Vegas Golden Knights. However, Parise played well when inserted into the lineup for the final four games of that series.

SPECTOR’S NOTE: The Wild could make Dumba unavailable in the expansion draft by opting to protect eight skaters. However, that puts them at risk of losing one of their good young forwards. Wild GM Bill Guerin will probably try to swing a side deal with the Seattle Kraken to ensure they don’t take Dumba if they leave him exposed. They could also try to convince Suter to waive his no-movement clause. The Kraken could be scared off by his expensive contract.

The Wild and Parise are stuck with each other until his contract expires in 2025. He’ll have to accept a lesser role with the club. As Muzitani observed, that’s something that will have to be worked out between Parise and head coach Dean Evason in the coming months.

← NHL Morning Coffee Headlines - June 5, 2021 NHL Morning Coffee Headlines - June 6, 2021 →
We use cookies on our website to give you the most relevant experience by remembering your preferences and repeat visits. By clicking “Accept”, you consent to the use of ALL the cookies.
Do not sell my personal information.
Cookie SettingsAccept
Manage consent