MONTREAL GAZETTE: Stu Cowan reported Canadiens general manager Marc Bergevin admitted the past year was difficult for him mentally as he thanked his players for pulling through a tough season to reach the Stanley Cup Final. 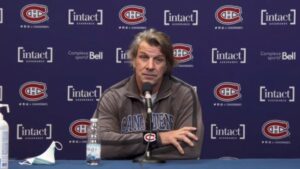 Bergevin has one year remaining on his contract. He indicated his intention to honor that but declined to say if he would sign an extension if presented to him. That’s generated speculation over whether he wanted to continue in the job after nine seasons.

SPECTOR’S NOTE: Bergevin may simply be exhausted after a trying year in which he made several notable roster additions, replaced most of his coaching staff midway through the season, saw his club sidelined for 10 days by a COVID-19 outbreak, watched them struggle to clinch a playoff berth and overcome long odds to reach the Cup Final.

Perhaps his comment was a subtle way of angling for better terms on an extension. Or maybe he’s truly burned out after nearly a decade in one of hockey’s highest-pressure markets and intends to move on after next season.

Whatever the reason, his future with the Canadiens will become a hot topic for conjecture in Montreal throughout this offseason.

Speaking of uncertain futures, pending unrestricted free agent Phillip Danault expressed his wish to remain with the Canadiens. He also admitted he rejected a six-year, $30-million contract offer last fall, adding it affected his game during the regular season when the story was leaked to the press. He also said he was worried about losing ice time to younger centers Nick Suzuki and Jesperi Kotkaniemi.

SPECTOR’S NOTE: Danault should be commended for his honesty. Most players in his situation would just mumble cliches to dodge the question. His strong defensive play throughout the postseason earned him the most ice time among Habs forwards. He garnered praise for shutting down his opponents’ top offensive players. He’s in line for a big raise, either with the Habs or another club via free agency.

Defenseman Jeff Petry revealed the reason behind his bloodshot eyes during Game 2 of the semifinal series against the Vegsa Golden Knights. It was tied to the broken pinky finger suffered during Game 3 of the previous series with the Winnipeg Jets. Petry said he passed out when his finger was being set in place before putting it in a cast, causing the blood vessels in his eyes to burst.

Petry jammed the finger into a photographer’s hole in the glass in a freak accident, which turned his finger sideways. He played the remainder of the playoffs with two fingers taped together. He hopes to avoid offseason surgery but will learn more when he revisits the doctor.

SPECTOR’S NOTE: Petry faced surgery that would’ve sidelined him six to eight weeks. He instead opted to immobilize the finger and rest for one-to-two weeks and return to action.

Canadiens captain Shea Weber could require surgery on his left thumb to repair damaged ligaments. If he goes under the knife it’s expected he’ll be ready for the start of next season.

Corey Perry hopes to return to the Canadiens next season. He joined them on a one-year, $750K contract and was placed on waivers earlier in the season to be placed on the taxi squad. There were three teams hoping to put in a claim for Perry but his agent advised them against it because he wanted to stay in Montreal.

SPECTOR’S NOTE: Perry isn’t the superstar he was a decade ago but he was an invaluable and respected part of the Canadiens’ lineup this season. He had 21 points in 49 regular-season games and finished fourth among their postseason scorers with 10 points in 22 contests. He should be an affordable re-signing for the Habs. If they don’t bring him back he’ll draw plenty of interest from other playoff contenders.

NBC SPORTS: It’s still unclear if the Canadiens will lift the interim tag off Dominique Ducharme and make him the full-time head coach next season. Bergevin indicated it’s one of the first things he intends to sort out.

SPECTOR’S NOTE: Ducharme was criticized by many observers (including me) for the Canadiens’ struggles over the second half after he replaced Claude Julien. That tune changed with the Habs’ march to the Final.

I expect Ducharme will return as the Canadiens’ full-time bench boss. Still, there are legitimate questions about whether he belongs in that role. Much of their playoff success was due to Carey Price returning to his dominant form. Ducharme also seemed reluctant to give more ice time to his younger players, especially promising defenseman Alexander Romanov. The Habs also played well under assistant coach Luke Richardson when Ducharme was sidelined for two weeks by COVID-19.

THE ORANGE COUNTY REGISTER: The Anaheim Ducks hired Joel Bouchard as the new coach of their AHL affiliate in San Diego. Bouchard spent the past three seasons as head coach of the Canadiens AHL club in Laval.

SPECTOR’S NOTE: The Canadiens received some criticism for not retaining Bouchard, who did a fine job developing their promising players. They offered him the opportunity to remain in Laval or become one of their assistant coaches. But he opted to go to San Diego.

BOSTON HOCKEY NOW: Charlie Coyle recently underwent two surgeries on his left knee. His agent said the 29-year-old Bruins center is recovering well and expects to be ready in time for training camp in September.

SPECTOR’S NOTE: That explains why Coyle struggled throughout this season.

SPORTSNET: The key dates for the NHL offseason are as follows:

SPORTSNET: The Seattle Kraken will play six preseason games against the Vancouver Canucks, Edmonton Oilers and Calgary Flames. The three home games will be played in Spokane, Everett, and Kent.

SPECTOR’S NOTE: That’s a good way for the expansion club to make itself known throughout the state of Washington. It will also be the first games they’ll play against their regional NHL rivals.

SPECTOR’S NOTE: My condolences to Watson’s family, friends and former teammates and associates.

← NHL Rumor Mill - July 9, 2021 NHL Rumor Mill - July 10, 2021 →
We use cookies on our website to give you the most relevant experience by remembering your preferences and repeat visits. By clicking “Accept”, you consent to the use of ALL the cookies.
Do not sell my personal information.
Cookie SettingsAccept
Manage consent